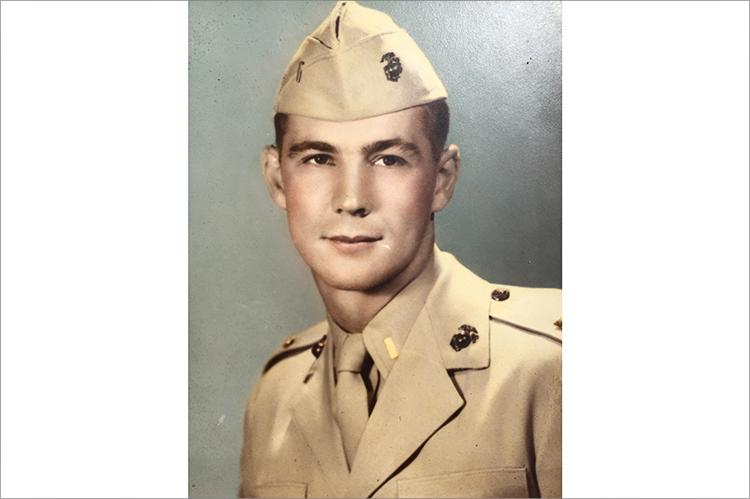 Mr. McDonald was born in a house on Church Street in East Hampton Village on April 2, 1930, to Zena Petitpas McDonald and Elmer McDonald. He was the youngest of four brothers who came of age during the Depression.

His family moved to Pleasant Lane in East Hampton when he was still young, a time that he cherished, often telling his family that everyone was as poor as church mice, but never knew it. The kids played kick the can, carried bags for visitors at the train station for 5 cents, collected coal off the train tracks, and picked leftover potatoes from the fields after harvest. The train conductors would shovel out a bit of extra coal for the kids, knowing how much they needed it to heat their houses.

He left East Hampton to attend college at Miami University in Ohio. During his summers, he was a lifeguard at Main Beach and then took what would become the most significant detour in his life, joining the Marines. He trained at Quantico, Va., Pensacola, Fla., and Cherry Point, N.C., and become a naval aviator. He flew his beloved Douglas Skyraider, landing on aircraft carriers when only a hook and band system stopped planes from careening into the sea. He said with each landing, he could see his life flashing before him.

His enthusiasm for flying made him locally famous for the time he “buzzed” East Hampton. After receiving his wings, he was ordered to fly an unmarked Skyraider from Cherry Point, N.C., to New England to be painted. He told his father that he would stop by East Hampton to say hello, and to go outside and look for him at 3 p.m.

That afternoon, the younger Mr. McDonald began his greeting by buzzing the beaches. He flew so low that he kicked up sand, causing the lifeguards to jump down from the stands and sunbathers to scatter. Among the beachgoers was a young woman who would be his future wife.

He flew low over the village and his family’s house on Huntting Avenue. Flying at the height of high-tension wires, the prop wash knocked down a neighbor’s television antenna and fueled the talk of the town. When he heard radio calls from the Westhampton air base, he high-tailed it away from East Hampton and headed to Rhode Island. He was never caught.

Mr. McDonald served during the occupation of Korea, spending time there and in Japan, where he developed deep friendships that would span and shape his life.

Upon returning from overseas service in 1958, he married Alice DeVenere of Leonia, N.J., whom he met at Main Beach, and began a long career teaching grade school, and later, high school biology at East Hampton High School.

He left military service in 1966 as a captain in the Marine Reserves.

Mr. McDonald invested in a United States-Japan import business started by his best friend from the Marine Corps, Bill Buchanan, which became a success and enabled him and his wife to pursue other entrepreneurial interests. The result was the launch of Park Place Wines and Liquors and Bermuda Party Rentals, among other ventures in East Hampton Village.

The couple loved their businesses, East Hampton, their family, and travel. Together they visited over 130 countries. On their travels, Mrs. McDonald had her husband wear a yellow hat so that she could always locate him in a crowd.

She died in 2011. Mr. McDonald was devastated but reconstructed a life through relying on his love of routine, which included stopping by both businesses, visiting Main Beach, and speaking with his children daily. One of his favorite things to do was to drive around East Hampton, reminiscing about all the characters and history of the area. In his final years, he could often be found at Main Beach, wearing his yellow hat, enjoying the ocean and his “cronies.” He was laid to rest in a yellow shirt so that his late wife would always be able to find him.