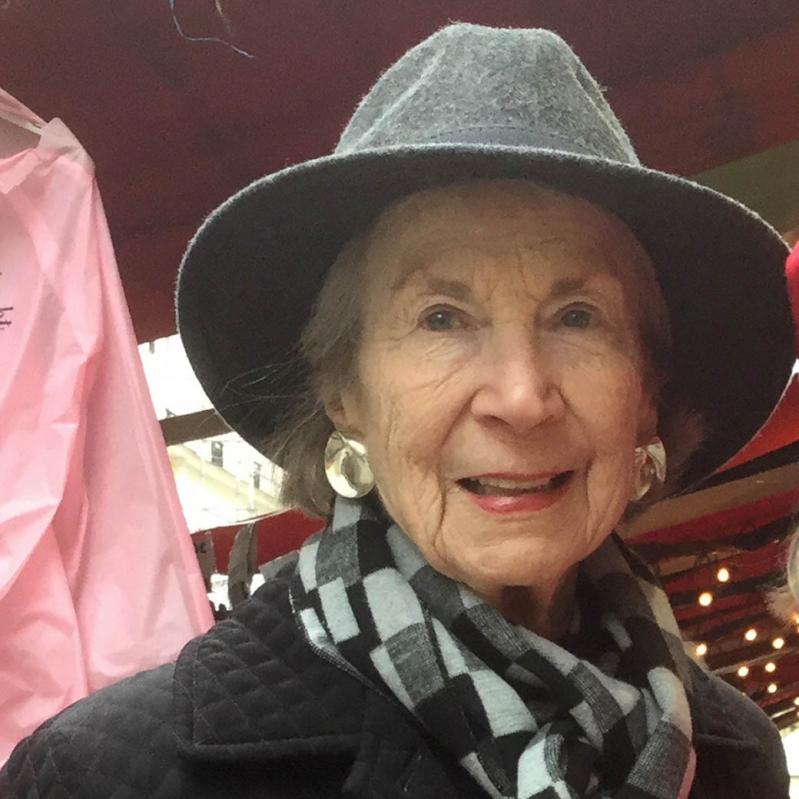 Weezie Quimby in Paris in 2018
Gay Lynch
By Baylis Greene

Gay Lynch called Elise Quimby, her good friend and fellow Bridgehamptoner, “a presence. She was just about six feet tall. Great posture. Great dresser. After she graduated from Vassar she moved to New York, before she got a ‘real’ job, she had a turn as a hat-check girl at the Stork Club. Her first job in publishing was to take visiting authors out for lunch. This tells you how charming and confident she was.”

Ms. Quimby, who went by Weezie, died on May 3 at Sibley Memorial Hospital in Washington, D.C., according to The Richmond Times-Dispatch in Virginia, her hometown newspaper. She was 85 and had been ill for some time.

“I met Weezie and Wallace Quimby about 30 years ago through mutual Bridgehampton friends,” Ms. Lynch recalled. “After Wallace died and Weezie became a widow, she became practically a member of our family. She eventually rented the house right across the street.”

“She had boundless energy, and if she wasn’t wrapped up in some do-good project, she would find any reason to have a party. In many ways she was a throwback to the ’50s. A party usually had a theme, often including dress-up. She was extremely creative with flowers, posters, calligraphy. She certainly could have been an event planner.”

Among Ms. Quimby’s do-good endeavors was her service for many years on the boards of the Hampton Library in Bridgehampton and the Bridgehampton Museum. The library has an Elise Quimby Long Island Room in honor of her work promoting local history. She also was instrumental in the library’s renovation and expansion, which broke ground in 2008.

Lee Foster of Sagaponack, who was on the library board at the time, praised her friend’s “exquisite sense of decorum and taste” in helping lead the expansion, with an emphasis on “design and comfort.”

“She was well read and knowledgeable about most anything,” Ms. Lynch said.

“I called her when even my thesaurus couldn’t help,” Ms. Foster said. “She also supplied me with words of wisdom.” For example? “The true test of good manners is how well one puts up with the bad manners of others.”

“She has left a hole in many lives,” Ms. Lynch said, “certainly mine.”

Born Elise Power in 1934, Ms. Quimby attended St. Catherine’s School in Richmond, finishing in 1952. A first marriage to Russell Pickering ended in divorce. She is survived by a son, William A. Pickering of Richmond; a daughter, Brooke Pickering-Cole of Stone Ridge, N.Y., a stepson, Ted Quimby of Sagaponack, and a granddaughter and two step-granddaughters. She also leaves a sister, Ann Brooke Mason. A brother, William Brooke Power, died before her.

A service will be held at a later date. Memorial contributions have been suggested to the Hampton Library, P.O. Box 3025, Bridgehampton 11932.

East Hampton Samples Are a Crucial Contributor to Lyme Test
Ready to Adopt a Pet? ARF Is Ready, Too
Guild Hall's Curator Visiting Studios Virtually Through June
Seeking Stories and Images From the Time of Covid
END_OF_DOCUMENT_TOKEN_TO_BE_REPLACED