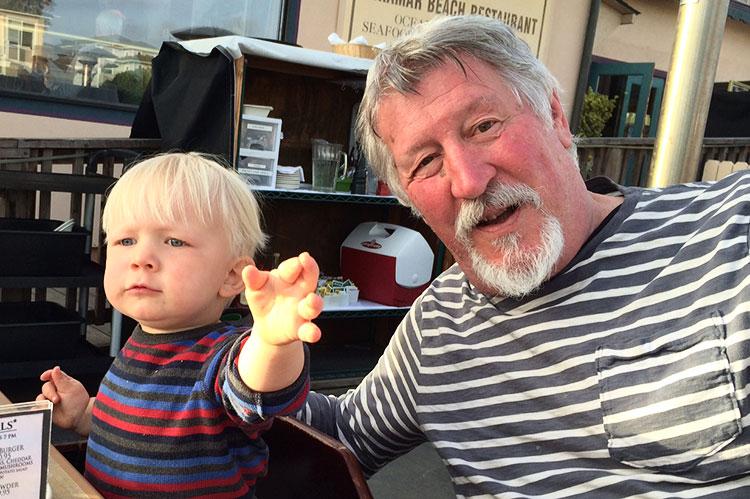 David Geiser, an artist whose career ranged from the underground comics he created in San Francisco in the late 1960s and 1970s to heavily textured mixed-media works he focused on after moving to New York in 1979, died unexpectedly of heart disease in his sleep at home in Springs on Oct. 14. He was 73.

A prolific artist, his work from the underground comics early in his career to recent drawings such as "Snail Ridin' the Mouse" and "Dog Boy (a Young Cynic)" reflect his not only his wit and the eccentricity of his vision but also his remarkable draftsmanship.

And yet, contemporary with those meticulously detailed drawings are his "Chunks & Nuggets," abstract, block-like mixed-media pieces built up from oil, varnish, gold leaf, driftwood, and the occasional mushroom.

His body of work also includes abstract mixed-media pieces created on irregular shapes of parchment, a series he returned to over a period of 20 years, and lavish, layered oil paintings featuring organic forms on board.

A recipient of a grant from the Pollock-Krasner Foundation, Mr. Geiser was represented by Butters Gallery in Portland, Ore., and exhibited his work at galleries and museums on the East End and throughout the United States.

"David left behind scores of underground comics from his early years in San Francisco, and hundreds of drawings and paintings," as well as sculptures ranging in size from five inches square to 10 feet by 10 feet, according to Mercedes Ruehl, his partner since 1999. "In his spare time he was an avid reader of contemporary fiction from a wide array of cultures and nationalities," she added.

Robert C. Morgan, a critic and artist, wrote in 1989 about the centrality of materials to Mr. Geiser's work. "Geiser's sense of tactile involvement in his work is neither predictable not gratuitous. It is a real encounter with whatever is in front of him at the time. . . . It is not the object that obsesses him, but the field of activity."

Of a 2008 exhibition at Kips Gallery in Chelsea, Mr. Morgan wrote, "In each case, the paintings are highly textural and densely packed with pigment and natural substances, including various species of tree bark and fungi."

David Montague Geiser was born in Rochester on June 28, 1947, to Donald Geiser and the former Louise Shields, and grew up there. After graduating from the University of Vermont in 1969, he drove his Volkswagen bus to San Francisco.

"I'd always been interested in the Beats of North Beach," Mr. Geiser said in a 2009 profile in The Star. "I saw what was happening with the underground there and comics and became interested."

Once settled in the Mission District, he met Gary Arlington, founder of the San Francisco Comic Book Company, and over the next six years he produced a series of countercultural comic books and designed posters for rock concerts at the Fillmore.

He left San Francisco in 1976 and spent two years in Paris, where he studied at the Ecole des Beaux-Arts, before returning to the United States in 1979 and settling in SoHo. He moved to East Hampton in 2001.

"In recent years, he had taken to a schedule of watching sunrise over the ocean, sunset over the sound -- with one can of Modelo beer -- and was known to pull over his car and move turtles from one side of the road to the other as they were crossing," according to his son Cameron Geiser of Montara, Calif.

In addition to his son and Ms. Ruehl, Mr. Geiser is survived by another son, Jake Javier Ruehl of East Hampton, two grandchildren, Dylan and Bryce Geiser of Montara, and two sisters, Ann Louise Dwyer of Rochester and Jody Meyer of Lake George, N.Y. A previous wife, Gabrielle Selz, also survives. His first wife, Virginia Lee Tombs, died before him.

A celebration of Mr. Geiser's life and art and a dispersal of his ashes will take place in East Hampton in the spring.