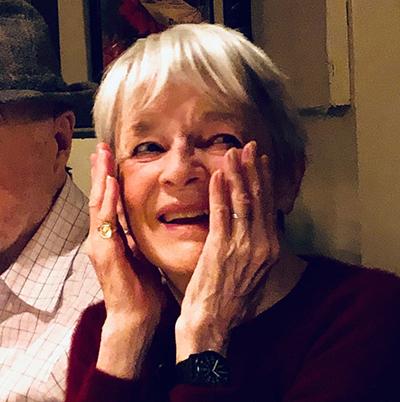 Anne Fritts Stewart of Springs and Manhattan died at Mount Sinai Hospital on the Upper East Side on May 5, of complications following abdominal surgery. She was 80 and had been ill for one day, her family said.Mrs. Stewart especially enjoyed her time here with her four children and three grandchildren and derived profound joy, her family said, from their hours spent at Indian Wells Beach or Maidstone Park Beach. She was devoted to her partner, Martin Gaare, they said, and was a voracious reader of mystery novels, especially Agatha Christie’s. She completed the New York Times crossword puzzle, in ink, every day.Anne Louise Fritts was born in Somerville, N.J., on April 7, 1939, one of three children of Dr. Lewis Canfield Fritts and the former Marion Snyder. She grew up there and graduated from the Hartridge School in Plainfield, N.J., afterward attending Elmira College in Elmira, N.Y., for two years. She graduated from Columbia University in 1963 with a B.S. in nursing.She worked as a clinical nurse at Massachusetts General Hospital in Boston, where, in the intensive care unit watching over a patient’s difficult lumbar puncture, she met her husband to be, Michael M. Stewart, M.D., then an internist Family legend had it that he told her after the procedure was finished to “put a Band-Aid on that,” to which she replied, “Which one?” They married six weeks later in Princeton, in February 1966.In 1969 Dr. Stewart moved his family to Bangkok, where he worked for the Rockefeller Foundation, developing programs in rural medicine. When that ended four years later, they moved to New Rochelle.Dr. Stewart was related to the MacCracken family, who still own a house on Bluff Road in Amagansett, near its intersection with Atlantic Avenue. The relatives gave the Stewarts the use of the house every August starting in 1976, and they became members of the Amagansett Beach Association at Indian Wells Beach.After Dr. Stewart’s unexpected death in 1983, his wife, whose close friends affectionately called her Fritts, returned to work as a clinical nurse, overseeing a hypertension clinic in Lower Manhattan. She did not remarry, but, said her family, found love and companionship with Mr. Gaare, a professional trumpet player, widower, and father of four. They moved to the Upper East Side in 1993 and had lived there together ever since. In Springs, they lived near Maidstone Park, close to the beach “where she found the most happiness.” He survives.Mrs. Stewart’s children, Andrew Stewart of Rhinebeck, N.Y., Michael Stewart of Independence Township, N.J., and Christopher Stewart and Molly Stewart of East Hampton, survive, as do three grandchildren and her brother, James Fritts of Richmond, Va. A sister, Cornelia Fritts of Ridgefield, Conn., died more than 30 years ago.Mrs. Stewart was cremated. There will be a memorial service on Saturday at 11 a.m., at St. James the Less Episcopal Church, 10 Church Lane, Scarsdale, N.Y., where Dr. Stewart is buried. The family will distribute Mrs. Stewart’s ashes privately.Memorial donations have been suggested for the Education Fund of Associates in Internal Medicine, Columbia University Medical Center, 22 W. 168th Street, #205, New York 10032.