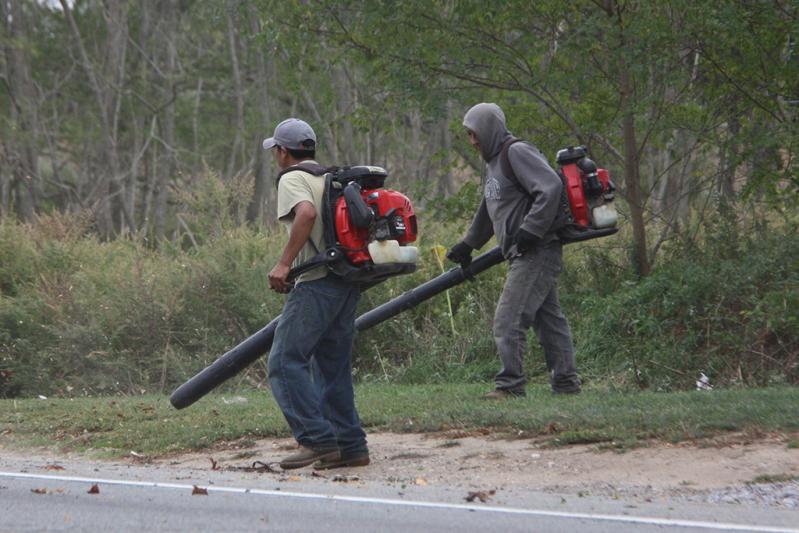 East Hampton Village is considering laws that would vastly restrict the use of gas-powered leaf blowers and other landscaping equipment in the summer months and require landscapers to obtain licenses.
Durell Godfrey
By Jamie Bufalino

East Hampton Village is considering laws that would vastly restrict the use of gas-powered leaf blowers and other landscaping equipment in the summer months and require landscapers to obtain licenses.

Under existing law, between June 1 and the second Friday of December, a homeowner or tenant’s use of gas or diesel-powered lawn care equipment is limited to Monday through Friday between 8 a.m. and 6 p.m., on Saturday between 8 a.m. and 3 p.m., and on Sunday and federal holidays between 9 a.m. and 3 p.m. People other than the tenant or homeowner must follow the same restrictions on weekdays and Saturdays, but are also prohibited from using such equipment on Sundays and federal holidays.

The proposed law, introduced at an East Hampton Village Board meeting on March 15, would completely prohibit the use of such equipment between June 1 and Labor Day, and at all times on Sundays and federal holidays (including between Labor Day and May 31). Golf club and municipal employees who are performing their professional duties would be exempted from the prohibition, as they had been previously, provided that no leaf blowers are used within 100 feet of the nearest residence.

After reading the draft of the law, board members asked Linda Riley, the board’s attorney, to make it more clear that homeowners were only prohibited from doing the kind of landscaping that created noise. Weeding or raking, for example, would be allowed at all times of the day and year. Ms. Riley said she would prepare a new draft in time for the board’s April 4 work session, and Mayor Paul F. Rickenbach Jr. said a public hearing would likely take place in May.

The proposed law that seeks to license professional landscapers would require a landscaping business to pay an annual $200 registration fee, agree to abide by the village’s laws governing the use of gas-powered lawn equipment, have a valid home improvement license from the Town of East Hampton, and, if applicable, provide proof that it has the necessary state and county certification to use pesticides, other regulated chemicals, or fertilizers.

Once the village administrator determined that a business has met all the requirements, a registration sticker would be issued. The proposed law states that a sticker, which would cost $10, must be placed in a conspicuous location on each vehicle used by the company.

Violations would be punishable by fines, the law says, which increase in amount based on the number of offenses. The village board would have the power to revoke the license of any business that violates the law.

In other business, the board scheduled two public hearings for April 18 at 11 a.m., one for a proposed law to ban the intentional release of balloons, following a similar East Hampton Town ban, and the other for a proposed law that would prevent utility companies from excavating roads that the village has recently repaired.

The board also accepted Edison Gordillo as a new member of Fire Department Engine Company #4, and approved an agreement with the East Hampton School District for the use of Herrick Park.