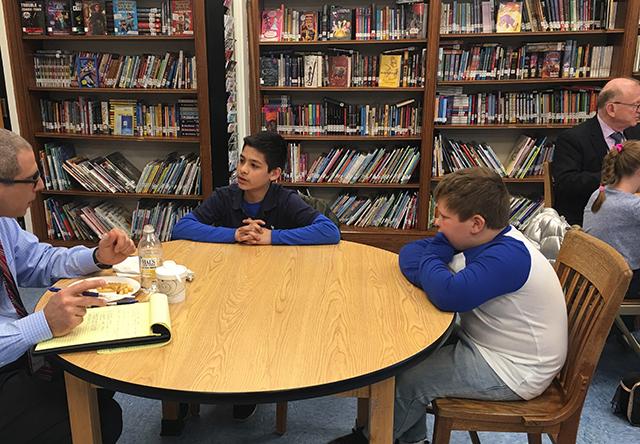 Luis Penafiel, center, a Bridgehampton School fifth grader, and Eli McCleland, a second grader, spoke to an accreditation official who visited with students on Tuesday in the school’s library.
By Johnette Howard

The board of the Sagaponack School District, which now has 17 students in kindergarten through third grade in its little red schoolhouse, declined to add the Bridgehampton School as an option for graduating students at its March meeting despite having been pressed to do so by some parents for several years.The district now contracts to send students to either Sag Harbor or East Hampton. Ashley Dye, a Sagaponack resident and mother of five, is among those who hoped Sagaponack would add Bridgehampton as a third option.But while sending a pupil to East Hampton for the 2019-20 school year will cost the Sagaponack District $31,418 for each kindergartener through sixth grader and $22,648 for each seventh through 12th-grade pupil, the Bridgehampton School District has rates for out-of-district students that are $18,000 to $7,500 lower.Bridgehampton charges $13,000 from kindergarten through sixth-grade and $15,000 for seventh through 12th, Robert Hauser, the superintendent of the Bridgehampton School, confirmed on Monday.Bridgehampton’s per pupil rates are also $5,000 to $7,000 lower than Sag Harbor’s for out-of-district students, which are $18,807 for kindergarten through sixth grade and $24,447 for seventh through 12th.“There are a lot of parents and students who are interested in the Bridgehampton School, they’ve been asking our school board to consider it, and the board keeps dragging its heels,” said Ms. Dye, who has one child that’s of pre-kindergarten age and another who will attend kindergarten next year.“Some of us don’t understand why our children have to be bused a half-hour away when we live a half-mile or so from the Bridgehampton School, the cost there is far less, and people who are already paying to send their children to Bridgehampton love it,” she said.Alan Van Cott, superintendent of the Sagaponack School, and Cathy Hatgistavrou, president of its board of trustees, responded via email on Monday that East Hampton and Sag Harbor were chosen “based on a longstanding tradition of cooperation and collaboration” with the two districts, and “additional consideration and extensive research would have to take place to consider approving another district” for a small number of students.Mr. Van Cott and Ms. Hatgistavrou also wrote that Mr. Van Cott had “ongoing communication with the Bridgehampton superintendent. He found that the tuition rates for East Hampton and Sag Harbor were comparable and that the tuition rates for Bridgehampton were not finalized at the time of the Sagaponack District’s board meeting on March 14.The Bridgehampton School has been drawing increasing interest from parents in neighboring areas as they and school officials note many changes at the school.Ms. Dye said she knows some Sagaponack School parents who are already sending their children to Bridgehampton and pay out-of-district tuition themselves since the Sagaponack trust-ees won’t approve it. She questions why Sagaponack taxpayers should have to shoulder the higher rates Sag Harbor and East Hampton charge.“I know one parent who is a single working mother and she can’t afford the out-of-pocket tuition to send her children to Bridgehampton, but she would like her children to go there and she lives near the school,” Ms. Dye said. “I live in Sagaponack, and we’re so close to Bridgehampton I take my kids to the Bridgehampton Library. We play at the park in town. We know these kids that already go to the Bridgehampton School. We’d like it to be an option.”All three districts set their 2019-20 rates only last week. The Bridgehampton School projected all along that its rates would stay the same or tick down, while the large gap between its rates and East Hampton’s and Sag Harbor’s was never likely to be closed.Debra Winter, superintendent of the Springs School, said last month that Bridgehampton would be an option if her district was unable to negotiate lower rates with East Hampton by the time its contract expires next year.Last year, Bridgehampton voters approved a $29.4-million bond for the renovation and expansion of the 80-year-old school building, which now has 228 students in kindergarten through 12th grade. Once the project is completed, Bridgehampton will have new science, technology, English, math, and music rooms, as well as a new regulation-size gym, locker rooms, and cafeteria. Part of the current gym will become an auditorium and the remainder a new school library.The Bridgehampton School has also installed more efficient geothermal heating and cooling and plans to move its pre-kindergarten into the revamped main building and out of 40-year-old modular classrooms on the west side of the school property. Construction remains on track to be completed by July of 2020, Mr. Hauser said. The school has already hired two of the five additional teachers it intends to add by then for its special education, technology, math, and reading advanced placement offerings.