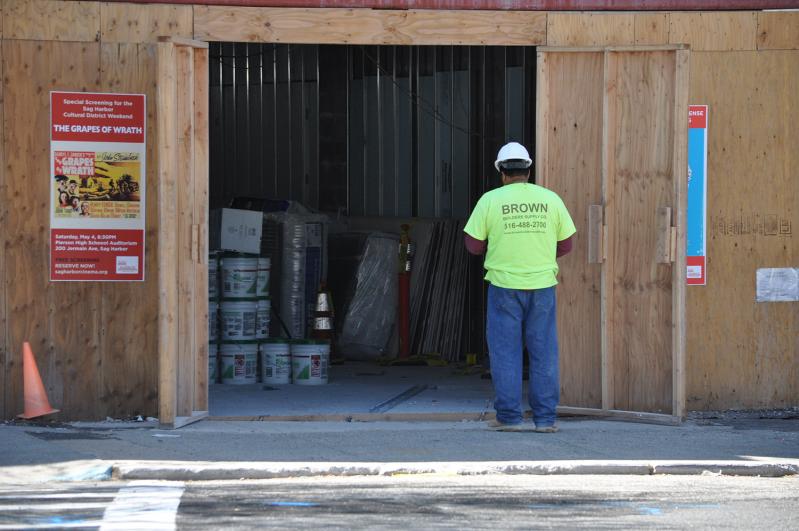 A worker paused for a moment of fresh air outside the Sag Harbor Cinema restoration yesterday. About $4 million in additional funding is needed to complete a planned film arts center there.
By Johnette Howard

The construction of a reimagined Sag Harbor Cinema Arts Center is swinging into its third and final phase and remains on target for a fall opening, as organizers now seek to raise an additional $3 million to $4 million in donations to cover some amendments to the original construction plan, in addition to the final furnishings, equipment, and staffing to make the center operational. If past is prologue, the two-plus-year-old community-driven effort to rebuild the Main Street landmark and restore its iconic neon sign will soar past this latest funding goal, too. Since a fire badly damaged the cinema and some surrounding buildings in December of 2016, more than 2,500 people have donated money to rebuild the cinema, and more than 90 percent of those donations have been under $1,000.The thank-you page on the cinema’s website (sagharborcinema.org) additionally lists several hundred other contributors who have donated a wide array of goods, services, time, materials, building expertise, and design savvy to push the project toward completion. Donors have provided everything from the architectural plans to the fabric for the refurbished seats.“The Sag Harbor-ness of this whole effort has been tremendous — there is a talent pool and experience pool of people here that is just staggering,” April Gornik, the head of the cinema’s executive board, said in an interview on Saturday. “Sometimes I wish I had a dime for every time somebody said, ‘Oh, raising money should be easy, there are so many millionaires out here.’ ”“The reality is we’ve been so insanely lucky with the good will and understanding and support we’ve received from the entire community. And you don’t have to get on a soapbox and sell this to people. We’ve had so many, many amazing volunteers. We thank the people who give us $100 the same as someone who gives us $100,000 because it represents something for all of them.”Ms. Gornik said that in the nearly 30 months that have passed since the original theater burned down, something happens almost daily to remind her of the emotional resonance the cinema still holds for people. She was speaking to someone on the street in Sag Harbor last week who told her, “My sister is still so upset about what happened she still tears up when she thinks about what [restoring] the place means to the community.”“When I hear that, it’s like a B-12 shot of energy — it’s wonderful,” Ms. Gornik said. “People understand what was lost and it’s important to them for future generations, too.”The additional money that organizers are now seeking will be used to cover a variety of expenses. Because more of the building was compromised by the fire than structural engineers were originally able to discern, contractors had to tweak the design and go back before the village architectural review board to make some needed changes. Once that happened, Ms. Gornik said, the cinema board decided it would be “crazy, while we were at that, not to expand the third-floor space. We had a smaller space planned there before. Now we’ll have offices and a bigger educational space.” In addition to those costs, money is also needed for administration and staff hires, the purchase of projectors and a state-of-the-art sound system, and equipment for the new concession stand and cafe. “The food service will be as eco-friendly as possible, locally sourced as possible, and reflect the East End community,” Ms. Gornik said.All donations to the project are 100-percent tax deductible. Naming rights for various features in the building are also for sale. (The singer Billy Joel has already snagged naming rights for the popcorn concession.)When the new cinema is done, it will feature three screening rooms rather than the one 480-seat theater it had before the fire. The first-floor space will now be divided into one large-screen theater and a second, more intimate repertory theater. The second floor will feature a 40-seat screening room and classroom. The third floor will have offices, a small lounge, and perhaps a virtual reality workspace.In addition to programming a robust offering of international and art house movies, film festival fare and current releases, the new cinema will engage in educational outreach to local schools and residents. “In terms of restoration and in terms of what we will be able to provide for future generations, we’re very excited,” Ms. Gornik said.