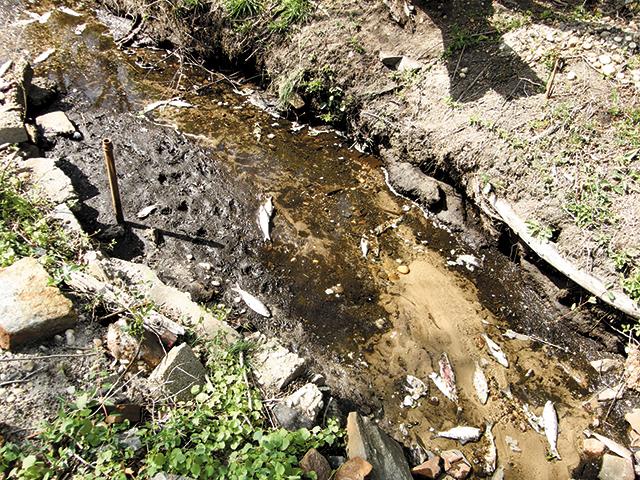 Alewives swimming up Ligonee Brook in Sag Harbor don’t always make it successfully to Long Pond, as seen here in a photo from 2012.
By Larry Penny

It’s Monday, all the snow is gone here in Noyac. The News 12 weather channel predicts a week of high temperatures in the upper 50s with no snow, but some rain. Right now it’s 50 degrees, March is rapidly morphing from a fierce lion into a gentle lamb.This should be a week of major appearances, and apparently one is already onstage. Byron Young, the head of the Eastern Long Island Audubon Society, emailed me on Saturday with a heads-up. He had finished leading a field trip at the Elizabeth Morton National Wildlife Refuge and decided to go to East Hampton to look for signs of spring. He ended up at Accabonac Harbor, where he thinks he might have found a new eagle’s nest.While there he met a woman who told him that she had just seen an osprey at Maidstone Park on the bay, the first report of one to cross my desk this year. This is the time for the ospreys to sail back home, so it makes sense. Keep your eyes open from now on, because the return of the fish hawk is one of the most impressive signs of spring.I would not be surprised if another sign of spring should pop up this week, one that arouses our auditory senses, not our visual ones. The spring peeper is one of our most faithful signs of spring, never missing a single year, even when it’s very dry and there is hardly a pond holding water for them to breed in. These little tree frogs didn’t get a long winter’s sleep this time around; they didn’t go under and hibernate until November. Less than two inches long and hard to make out against the lichen-covered bark of our oaks, maples, and hickories, they may emerge sleepy-eyed and groggy, but somewhere on the South Fork they’ll be up and wailing away, cheep, cheep, cheeping their rising notes. If you live anywhere near freshwater, you can’t miss them.Freshwater? That reminds of another March sign of spring that follows on the tails of the ospreys and spring peepers. The alewife, a herring species and one of the only fish named after a woman, will be back, but not nearly so widespread on the South Fork as the osprey and the spring peeper. In fact, there is only one major alewife run these days between Montauk Point and Riverhead, and that takes place in North Sea at North Sea Harbor and Big Fresh Pond. In the old days, there were at least 10 local runs of this anadromous herring species, that feed in salt water but breed in freshwater. The installation of culverts and changes in stream depths and other obstructions have pretty much brought the runs into Jeremy’s Hole in Sagaponack, Big Reed and Stepping Stone Ponds in Montauk, Scoy Pond in East Hampton’s Northwest, and the ponds at the very eastern edge of east Shinnecock Bay in Southampton to a standstill.And while we are on the subject, let us not forget about a local catadromous species (one that leaves salt water to breed in freshwater) that is also on the brink of disappearing and is considered endangered or threatened along parts of our Atlantic Coast: the American eel. In order to breed, it swims down the same streams in the opposite direction as the alewives, all the way south to the Sargasso Sea, almost 1,000 miles from here. The baby elvers, five or six inches long and almost transparent to avoid predation on the way back to their mothers’ ponds, arrive in the early spring.And there are other birds besides the osprey that have already come back after a long flight north from their southern wintering grounds. Red-winged blackbirds, grackles, robins, and a few other species are back. Fish crows and bluebirds will soon follow.Another sign of spring often noted in early March are the minute craters made of earth seen on lawns, playing fields and golf courses. These are telltale signs of the emergence of earthworms. The larger ones of the species, called night crawlers, can be found lying on the grass at night prior to breeding, basking in the moonlight. They make wonderful bait for perch and sunfish, and in the past were a part of the rites of spring, at least for the schoolboys waiting for the warmup.Did I mention plants? Native witch hazel is blooming and snowdrops were blooming on the edge of a pond in Sagaponack off Audubon Lane that I was checking on two weeks ago. You can bet your eyeteeth that somewhere locally skunk cabbage is already in bloom.There is one last early spring form that is endangered in New York State, but which occurs here and there locally — the tiger salamander. It is the first one of the local mole salamander species to emerge from the ground and breed each year, particularly in the Long Pond Greenbelt region south of Sag Harbor Village. If you see one of these six-to-eight-inch-long black and yellow amphibians, please note the location and give a shout.Eek! As I was about to send this off to The Star, my wife screamed from the kitchen that the Argentine ants are back on the counter, a much less pleasant sign of the warming weather.Larry Penny can be reached via email at [email protected].

Petition to Speed Up Sand Replenishment in Montauk
Artistic Portraits of M.L.K. Up for Auction on Saturday
Wine Tasting for Lions Club
END_OF_DOCUMENT_TOKEN_TO_BE_REPLACED