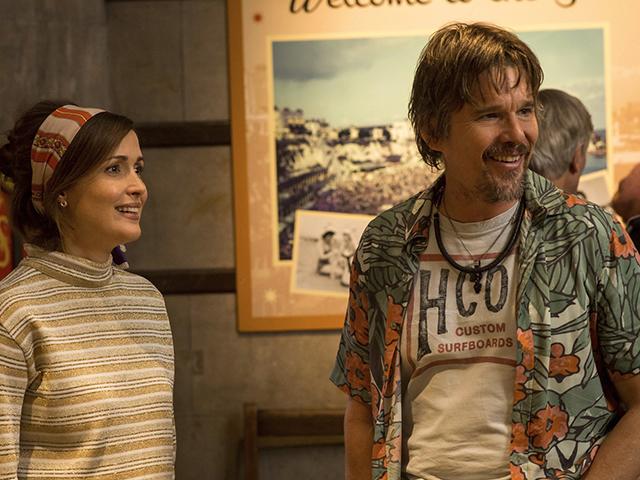 Rose Byrne and Ethan Hawke’s characters meet cute and complicated in the film “Juliet, Naked,” taken from a Nick Hornby novel that was initially adapted for the screen by Tamara Jenkins and Jim Taylor.
By Jennifer Landes

The old adage “Those who can, do; those who can’t, teach” will be upended at the Ross School on Saturday when two award-winning screenwriters take the stage to offer their insights on creating film scripts as part of the Hamptons International Film Festival’s Screenwriters Lab weekend.Tamara Jenkins and Jim Taylor, who are married, have a slew of credits to their names individually. The couple also contributed to the adaptation of Nick Hornby’s book “Juliet, Naked.” She directs her own scripts, including the recent Netflix release “Private Life,” the Oscar-nominated “The Savages,” and “The Slums of Beverly Hills.” Mr. Taylor is known for his longtime collaboration with Alexander Payne on such films as “Election,” “Downsizing,” and “About Schmidt,” and on the Oscar-winning script for “Sideways.”The class would be more of an exchange, they said last week, open to the concerns of those attending. They will show clips and share their experiences to launch a discussion. Ms. Jenkins, who teaches classes at New York University critiquing student films, said this will be a different experience for her. “We’re basically winging it,” she joked. “I hope we have something inspiring to say.”Between them they have covered the spectrum of screenwriting. From original material to adaptations, from collaboration to full control of a project, and from Hollywood-style productions to shoestring independents, there isn’t much they haven’t experienced in the world of film.Mr. Taylor, who has directed shorts but not feature films, said his scripts are ultimately shaped by their directors. “How they live with it on the set is the final arbiter of what it becomes. The most important thing is that the director is comfortable with it.”On the other hand, Ms. Jenkins writes with the intention to direct. Rather than leaving things open-ended for the director to figure out, she ties it up, “because the director is me. It makes you more neurotic as a writer, since you really can’t pass the buck.” She said she writes obsessively, always with “an eye to how it’s going to be on the screen.”Mr. Taylor agreed that a big concern is how “the page reflects the screen.” He, too, keeps the script tight, and that is how Mr. Payne directs it.“Alexander and Tamara are very similar to me,” he said. “We’re very persnickety. It’s sometimes hard to relate to people who aren’t as precise.”As a result, Ms. Jenkins said, 90 percent or more of her scripts are conceived in film as written. As the director, she understands “what the language is and what the intentions of a scene are. It’s rare that it changes.”During the rehearsals for “Private Life,” she said, Paul Giamatti asked if the script would be improvised at all. When she said no, “he said, ‘Oh thank God.’ A lot of the movies he worked on in the last several years kind of built in that idea.” Rather than feeling “straitjacketed in any way,” he was happy to have a fully realized script.The couple found working together on “Juliet, Naked” difficult on their marriage. They were the first writers to adapt the book into a script, but not the last. At the time, their daughter, Mia, was only 2, and they were confronted with a “fact-heavy novel, epistolary based, and anti-cinematic. It was maddening,” Ms. Jenkins said. They managed to finish a script, but Jesse Peretz, the director, hired his sister to write the final version. They saw it as a “butterfly that takes different stages before it flies away,” Ms. Jenkins said, adding that she preferred the writer-director experience instead. Still, they found that they complemented each other’s working styles. “Jim’s really good at puzzles and crosswords. I’m not logical. . . . He has a very good structural sense. He can see through the muck.”Mr. Taylor said his focus on Saturday would be “What’s your voice?” The best movies have strong connections between the film and the script and must be seen “on the screen and on the page.” Because of that, it’s important that “people aren’t writing something disconnected from themselves; it’s all about voice.”Ms. Jenkins said her theme would likely be that “writing is the most important part of any movie, even though it can be destroyed in the process. I’m always surprised at people who haven’t ironed out their screenplay prior to filming. It’s the architecture of the whole thing. To shortchange that is crazy. If it doesn’t work on the page, it won’t work on the screen.”As a result, “We take a while to write,” Mr. Taylor said. “That’s the way we like it.”The class starts at 6 p.m. and costs $25. Tickets are available through the film festival’s website.