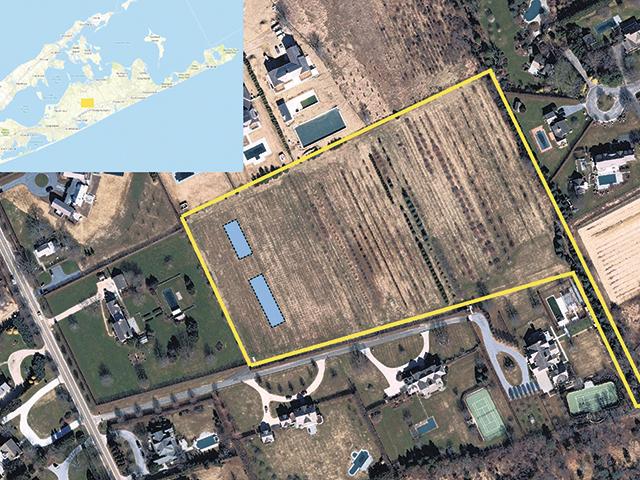 Adam Shapiro, a founder of East Rock Capital, wants permission to build worker housing, in blue, and a greenhouse on preserved farmland he owns near his house on Butter Lane in Bridgehampton.
By Jamie Bufalino

A plan for a tree farm in Bridgehampton that would include housing for agricultural laborers has been met with fierce opposition from neighbors. The owner of a nine-acre agricultural reserve at 625 Butter Lane in Bridgehampton is seeking permission from the Southampton Town Zoning Board of Appeals to construct two buildings totaling more than 2,000 square feet for the workers. The proposal requires variances because the structures would fall within the allowed setbacks from adjoining properties. Adam Shapiro, the manager of the limited liability company that owns the parcel and a co-founder of the investment firm East Rock Capital, was represented at the Feb. 7 meeting of the zoning board by his lawyer, John Bennett. According to documents submitted with Mr. Shapiro’s application, the agricultural reserve was created in 1996 when the land, which had been owned by the Hampton Day School, was subdivided. At the time, the town’s planning board designated a 200-foot-wide building area for accessory structures on the western side of the property. When that building area was drawn, Mr. Bennett said, the board failed to take into account the town code’s requirement that agricultural buildings “shall be no less than 200 feet from any side or rear lot line and 150 feet from any front lot line.” The size of the building area, he said, makes it impossible to meet the required setbacks. The proposed site plan for the parcel also calls for a nearly 3,000-square-foot greenhouse, located to the east of the housing, a 648-square-foot structure for storage, a parking area, a freestanding bathroom facility for customers of the greenhouse, and an outdoor kitchen. Although residential housing is not allowed on an agricultural reserve, Mr. Bennett said that the proposed buildings, which would house six people who would run the farm, should be considered agricultural accessory structures. In a Dec. 13 letter to the zoning board, the town’s planning board, which had been asked to review the application, said it was “generally supportive” of permitting the reduced setbacks for the housing, but recommended that the Z.B.A. limit the number of people who could live there. It suggested locating the buildings farther east (away from adjoining properties), and moving the greenhouse farther west. Michele Green, whose backyard abuts the property, is one of several neighbors who have vehemently opposed the proposal, both in letters to town officials, and during appearances at Z.B.A. meetings. The proposed housing would be “steps away from our family pool,” Dr. Green wrote in one letter. “I have two young daughters ages 10 and 14 who would no longer be comfortable using the pool if workers were indeed being housed steps away from them.” At the Feb. 7 meeting of the Z.B.A., Patrick Fife, a lawyer representing Dr. Green, asked the board to deny the variance request, and to send the applicant back to the planning board to determine a conforming location on the property where the housing could be built. He also submitted studies, which he said showed that only one or two employees, rather than six, would be needed to tend to the farm. Kevin Cox, another neighbor who spoke at the meeting, distributed a 20-page pamphlet outlining his objections to the buildings, which he said would “cause severe, negative consequences to the integrity and character of the community” by disrupting the existing open vista. The proposed 27-foot height of the greenhouse, he said, was neither “reasonable nor necessary” and would be visible to neighbors for most of the year.In response to the critiques of the site plan, Mr. Bennett said that his client intended to install a vegetative buffer that would screen the proposed buildings. The planning board’s suggestion to swap the location of the housing and the greenhouse would not be practical for the operation of the tree farm, he said. As for limiting the occupancy of the housing, he said that his client was open to signing a covenant stating that no more than six people would live there. Addressing Mr. Fife’s recommendation that the applicant be sent back to the planning board, Mr. Bennett said it would be a “waste of time and absurd to send it back to them” because the board had already offered its support for the proposal. Adam Grossman, the chairman of the zoning board, said the public hearing on the matter will remain open. The application will be revisited at a meeting on March 21.