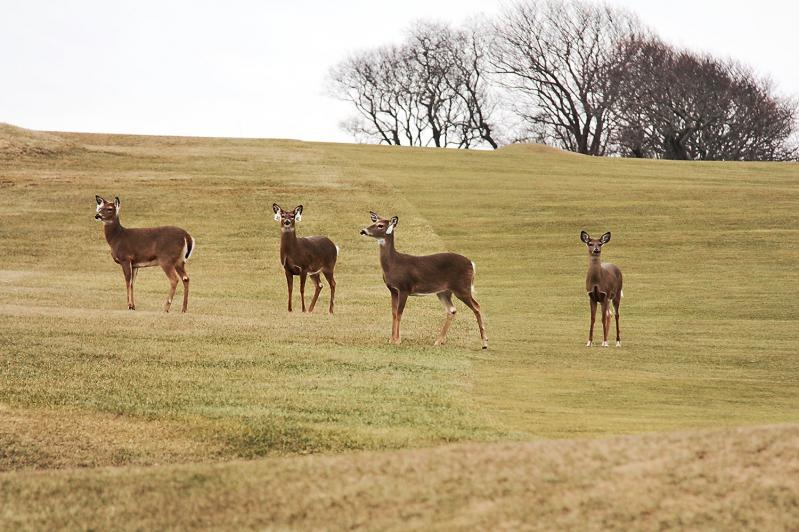 Deer with ear tags in East Hampton Village. No governmental body, either domestic or foreign, has ever declared that there are too many humans, but deer are another story, the columnist writes.
Durell Godfrey
By Larry Penny

The New York State Department of Environmental Conservation is allowing for a deer hunt on the Fire Island National Seashore. They say too many deer, too many problems.

No governmental body, either domestic or foreign, has ever declared that there are too many humans. China with its former one-child-per-married-couple policy came the closest. The deer to be shot, even if they were able to protest in a manner understood by the D.E.C. personnel, had little say in the matter.

The Bible says in more than one passage that God gave humans dominion over the animals. I learned that in Sunday school at the tender age of 5. The exact translation “dominion” as used here, has never been explained to the satisfaction of the many Bible authorities and readers. Some readers might proffer that it means that animals can become pets and thusly cared for. Others might say that animals can be used to do work, such as for plowing, rounding up stock, or providing transportation. They also provide entertainment, as in thoroughbred racing and in zoos and circuses. Guard dogs have always served a purpose. Bloodhounds and other dogs have been used to sniff out criminals or find missing persons. Before the age of electronic communications, carrier pigeons were used in communications to transport messages.

Though various animals have been hunted for food since the time of the earliest humans, the idea of recreational killing came much later.

Certainly, the story of Noah and his ark could not be construed to encourage the latter. While pets are still big in our society, recreational hunting is also big. Rich men still go to Africa to kill zebras, lions, elephants, and other big game in a sport known as “trophy hunting.” Remember those photos from a few years ago of President Trump’s sons with big game killed on a trophy hunt in Africa?

While there are many women who hunt, hunting with firearms or bows and arrows is still a pastime that is practiced mostly by men. Some species of birds and mammals have gained protection from hunting over the years because their numbers had plummeted. The idea of endangered and threatened species took hold in the 20th century; arbitrary numbers, or “limits,” decide when a species is no longer protected and can be hunted.

There are even individuals who raise game species — pheasants, quail, grouse, and the like — so that hunters can shoot them and take them home for a price. Some psychologists and animal behaviorists even go so far as to say that hunting is instinctual in humans, it’s in our DNA.

Hunting is a very old tradition, but the methodology has become more modern. When I hunted in the 1950s, automatic rifles were not allowed. In New York State an automatic or repeating shotgun that could hold six shells was fitted with a wooden dowel that limited it to three shells.

As hunting and internecine warfare grew in popularity, weapons became larger and faster. Machine guns are still used to settle (or continue) disputes between this and that country, this and that faction. In warfare, the hunting is for humans, not for infrahumans, the remainder of the macroanimal world. Shooting a human enemy in war is not a crime, shooting one otherwise is, just as shooting a mammal or bird out of season is a crime.

The popularity of firing weapons, either in wartime or peacetime, has steadily grown over the years, and the number of victims, be they humans or game, continues to increase.

It seems there is a mass shooting of humans in some location throughout the world just about every week. Mind you, guns and other weapons of destruction are fascinating and have come a very long way since muskets and Gatling guns. The M1 rifle I carried while in the Army would be considered an old-fashioned weapon or even a toy these days.

If you are a stand-up person, you can generally get a license to possess a firearm by going through the application procedure. If you are not such, there are plenty of illegal gun vendors and illegal guns to be had throughout the world. You will note that the “gun business” in America is one of the few factory enterprises that has not left American soil.

How far have we come? If the great Shakespeare were alive today, he might write, “To kill or not to kill, that is the question.”