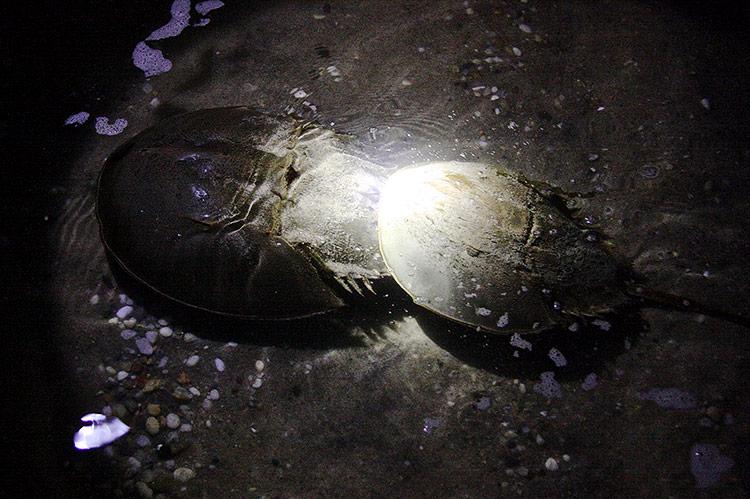 The coming widespread extinction of world species will be the sixth since the origin of Earth and the origin of life. Will it happen in your lifetime? Hopefully not. One of the species that could come to an end in this millennium is one very familiar to most Long Islanders, the fabled horseshoe crab, a species that evolved from a primitive water spider-like creature 450 million years ago.

In fact the species has done well over that extent, during which the trilobites, dinosaurs, and woolly mammoths became extinct as part of the fourth, fifth, and sixth great extinctions. Some paleontologists believe that we are still in the sixth extinction period, the majority of die-offs during which occurred from 12,000 B.C.E. on. Isn’t it ironic, perhaps, that a species that by hook or crook managed to make it into the 21st century may now be on its way out?

Without the process of fossilization and the uncovering of the fossil record housed in a bunch of museums and institutions and the tireless work of paleontologists and amateurs alike during the last five centuries, we would not have an inkling of what it was like over those 440 million years ago, when the first big die-off occurred. Today there are between eight and nine million species, three-quarters of which are terrestrial, the others waterborne, i.e., aquatic and marine. In terms of flora and fauna, there are about 298,000 species of plants, 7.5 million animals. Every day new species are collected and described and preserved in this or that fashion. In order to become an official species, the new plant or animal has to be described by a taxonomist, photographed, and preserved, along with the name of the discoverer, location where found, and name of the describer and author of the scientific binomen, that is, its genus and species.

The number of species waiting to be put through this time-taking process far outnumbers those described. Thus far, less than one-eighth of all species have been thusly described and preserved for safekeeping. The hunt for new species outstrips the time spent describing them and depositing them in a museum. Some 10,000 new species are discovered each year as expeditions probe previously unexplored sites or more carefully explore those previously checked on.

Of these 10,000, only a few are larger than a golf ball. For example, in the last few years, newly discovered macro-species included a bat, a blind fish, a toad, a snake, antelopes, a gibbon, and as well as a bamboo, all from one part of Asia. According to Eleanor Imster in a December 2018 post on Earth EarthSky News, 229 new species of animals and plants were discovered that year, including 120 wasps, 34 sea slugs, 28 ants, 19 fish, and several plants. As far as the total number of extant species in the world, it sounds as if we are still only scratching the surface.

Closer to home, in the last 150 years we have lost the passenger pigeon, heath hen, Labrador duck, Carolina parakeet, ivory-billed woodpecker, eastern cougar, blackfin cisco, deepwater cisco, and blue pike. Local species that were on their way out are the wild turkey, northern shrike, cuckoos, skunk, gray fox, tiger salamander, blue-spotted salamander, bob-white, and ruffed grouse. One of these, the wild turkey, has recovered to the point where the state has started a  turkey hunting season.

While every day man continues to engage man with ever more powerful weaponry throughout the world, there is a growing hope that we may yet avoid a seventh catastrophic die-off as resulted from the other six great extinctions. The Migratory Bird Treaty Act passed by the U.S. Congress and signed into law in 1918 was the start of the great comeback. Then, the Endangered Species Act of 1973, a product of the Nixon administration, put the icing on the cake. At the same time conservationists around the world banded together in this and that not-for-profit group led by the International Union for Conservation of Nature, itself an amalgamation of special interest groups, and published the Red Book, a list of all of the world’s species in trouble since 1964.

Finally, world governments began to give a damn! Vanishing species had a friend. In the United States, the Fish and Wildlife Service led the way. You could no longer shoot hawks, eagles, and other birds that were not game species. Big fines became the rule of the day.

It has been more difficult to get a handle on the import and export of species in trouble or parts of them. Pesticides and herbicides, still a problem in many areas, are more regulated. Today, poaching and illegal animal trading are the biggest obstacles to saving species such as the rhinoceros, elephant, pangolin, snow leopard, cheetah, various parrots and birds of paradise, and more. In certain parts of the world, such trade in animals and animal parts is not illegal and not regulated.

While we cannot ensure against a direct hit by a large meteorite that did in the dinosaurs 66 million years ago or another catastrophic act of God, we are definitely making progress, especially at the local level. There are more people who are animal and plant lovers than not. I am thankful for the upright hunters and fishermen who obey the laws and help those of us who don’t hunt and fish. I am hopeful. We may destroy ourselves, but fewer and fewer animals and plants will go the way of the tree once native to Georgia, Franklinia, extinct in the wild since the 1800s, or the Caribbean monk seal, declared extinct in 2008.

Larry Penny can be reached via email at [email protected]