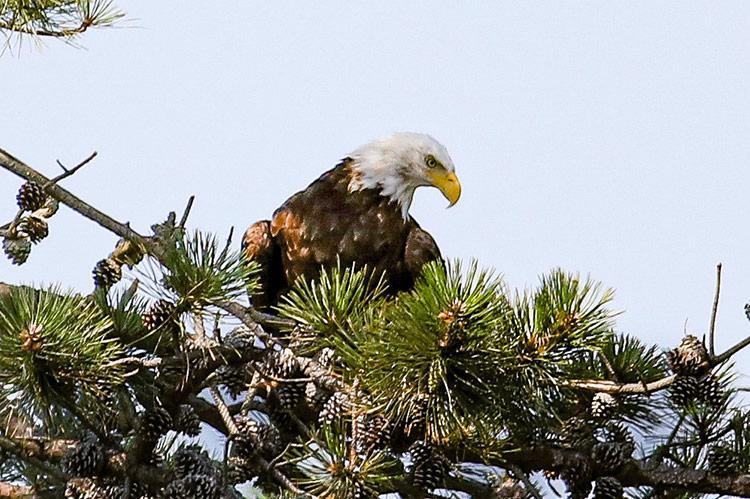 A mature bald eagle, part of a pair nesting near Georgica Pond, was photographed earlier this year. The pair is the most recent reported to be nesting on and around the East End.
Alfred Ross
By Larry Penny

According to “Bull’s Birds of New York State,” until recently bald eagles had last nested in the Long Island area on Gardiner’s Island in 1936. They almost became extinct in the lower 48 shortly thereafter. Under the aegis of the Endangered Species Act of 1973 they prospered, so much so that in 1995 they were moved from the “endangered” category to the “threated” category. Then, in 2007 bald eagles were removed from that list altogether. In 2006 on a Montauk Christmas bird count visit to Gardiner’s Island, which is in East Hampton Town, MaryLaura Lamont saw two adults and what looked like an immature eagle with them. She also saw a very large tree nest. Indeed, the bald eagle had landed back on Long Island, back in East Hampton.

Thirteen years later, several bald eagle nests have been reported on Long Island, including two more in East Hampton, one on a longstanding osprey nest platform on the west shore of Accabonac Harbor in Springs in March. A little while later, at the beginning of summer, another pair of bald eagles was found nesting in a tall conifer in the hamlet of Wainscott in the vicinity of Georgica Pond by Jane Ross, a South Fork naturalist and an avid photographer of birds and natural history. She and her husband, Alfred Ross, were able to take several photos of this pair of nesting eagles throughout the summer and into the early fall, as well as photos of the single offspring that the mature birds were raising.

Jane also followed the course of the two bald eagle chicks at Accabonac Harbor, one of which fledged early, while the other occupied the nest into late August. There was a bit of a squabble early on between the intruding eagles and one of the several pairs of ospreys nesting on the shores of Accabonac Harbor. In the end, however, the Accabonac ospreys and the single pair of interloping eagles all did well. The absence of salt marsh mosquito-fighting helicopters most certainly contributed to this success. The Accabonac eagles turned out to be one of the most photographed families of all time.

This year the Long Island bald eagles were back in force, with at least eight nests reported, all of which, to my knowledge, were successful. While bald eagles are known to rob ospreys and other fish-eating birds of their prey, nevertheless, the ospreys continued to increase their lot on the shores of Accabonac Harbor as well as throughout the Island. At least for now, all is well. The hamlet of Montauk has gone without on a nesting pair of eagles for almost 20 years running. The lone osprey nest established on a wooden pole and platform in the late 1980s lasted well into the 1990s but eventually bit the dust as Brushy Island in Fort Pond, on which it sat, has long sunk beneath the water level.

The longstanding GATR antenna site high on a hill east of Lake Montauk has a host of wooden towers left over from World War II. Victoria Bustamante, who lives nearby, has kept track of the site for several years running. This year an osprey pair built a nest and laid eggs in it, but, as in the past, it failed. Maybe that site will become the home of the first pair of nesting bald eagles in Montauk after an absence of more than 100 years.

The great thing about Ms. Ross’s discovery at Georgica Pond was that off and on through the years during the annual winter December bird counts dating to the 1970s and earlier, the spot other than Gardiner’s Island where you were most likely to find a bald eagle in the winter was Georgica Pond. And voilà, a pair finally nested there in 2019.

Had those winter visitors been sizing it up all those prior years? Now, if only a pair of the scions from the East Hampton eagles decided to nest on the shores of Kellis Pond in Bridgehampton. Kellis Pond is the southernmost freshwater pond in Water Mill’s Long Pond system, which runs from the Atlantic Golf Course’s Scuttlehole Pond at the edge of the moraine all the way south to tidal Mecox Bay, which opens to the Atlantic Ocean. The Long Pond system in Bridgehampton has been visited year after year by bald eagles, but thus far a pair has not attempted to nest there.

The federal Endangered Species Act, which got underway during the Nixon years, as well as all of the different stat­es’ acts that followed it, have been a

great success. One wonders, however, if the present Republican administration, which has already shown signs of weakening environmental protections across the board, will let this one go by the wayside as well.

Stuffed With Turkey? Walk It Off
Blood Drive Tuesday in Bridgehampton
Holiday Lights and Charitable Efforts in Montauk
END_OF_DOCUMENT_TOKEN_TO_BE_REPLACED