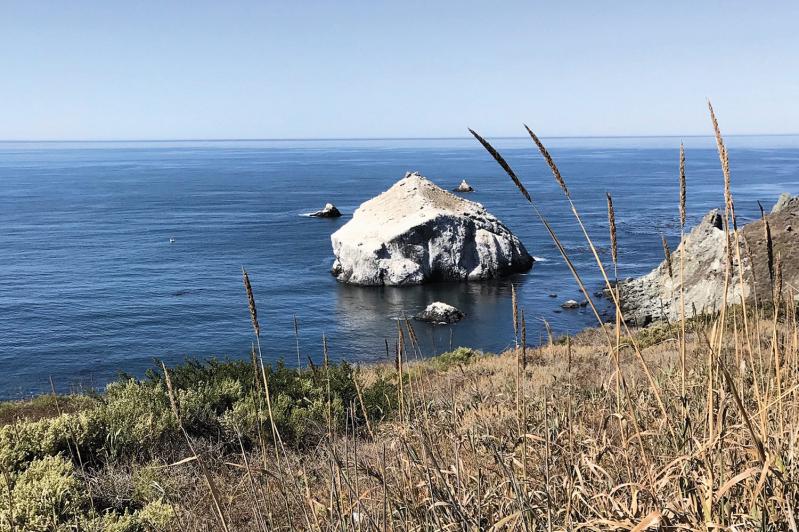 Unlike the large boulders seen off the coast of the East End, which are smoothed by their journey south in the last glacial period, those off the California coast between Morrow Bay and Monterey are mostly pyramid-shaped.
Julie Penny
By Larry Penny

Big rocks like those in Long Island waters are all glacial erratics, brought down from the northlands by the glaciers that created Long Island east of Queens and Brooklyn. Those that sit in Long Island’s shallow coastal waters are very rarely pyramidal, but roundish and smoothish, telltale signs of a long journey south.

We saw lots and lots of big boulders during our California trip, but we didn’t see an actual glacial erratic until our son Christopher drove us through the Tahoe National Forest to the highest point in the Sierra Nevada Mountains halfway between California’s Nevada City and Nevada’s Lake Tahoe. Indeed, those large stones seen on that trip were very similar in appearance to ours here on eastern Long Island.

The southern toe of the last glaciation that began to melt away 10,000 years or so ago stretched along America’s northern temperate zone from Long Island to California, and in Eurasia from England to Korea. So much of the world’s northern seas were locked up in the glaciers that sea level was at a record low and native peoples as well as many large mammals from Asia were able to cross to North America on foot.

Among the natural aspects of our past still with us are the glacial erratics such as Lion Head Rock in the bay off Springs, Jason’s Rock off Jason’s Path in East Hampton’s Northwest, and Split Rock in Hither Woods, and the centuries-old “lop” trees, almost all oaks, that marked geographical boundaries through the 1700s and 1800s, a few of which are still with us today. A low-slung erratic at the Duke Estate in East Hampton, now part of a park, is a kind of jackpot, for one of East Hampton’s largest lop trees, although in a deteriorating condition, stands beside it.

In the waters of Sag Harbor’s major inlet tying the outer bay with Sag Harbor Cove, glacial erratics, half covered by seawater, are common along North Haven’s eastern shore, from the bridge northward, and a few sit in  Sag Harbor Cove, the largest of which can be seen in the water south of Long Beach-Short Beach Road. One or two cormorants like to sit on that rock from late spring to early fall before heading south for the winter.

Montauk is very rich in glacial erratics. Those that sit close to shore in the ocean not far from the Lighthouse and east of Ditch Plain are a favorite of rod-and-reel fishermen who stand on them while angling for stripers. The ones closer to shore are apparent at most tides, but those farther out in deeper water never reach the surface. Just think, they’ve been sitting there in the same spot for 10,000 years or more.

The line of coastal glacial erratics runs both on the north of Montauk Point in Block Island Sound and south of the point all the way to Napeague, where these large stones are no longer evident. One has to travel all the way west to East Hampton Village’s oceanfront to see large rocks in the water again. These were put there less than a hundred years ago in three perpendicular lines called jetties stretching from shore out into the ocean.

A few of these ancient erratics have been decorated by graffitists, others have been painted, still others have been moved by contractors with heavy equipment. Thank God, the majority of them are still in place. The local road builders, while moving a few during road construction, mostly swerved the roads between them. Such as Brick Kiln Road, which winds its way between numerous erratics from the edge of Sag Harbor to Scuttlehole Road in Bridgehampton.

A few of the smaller glacial erratics got as far south as Kellis Pond in Bridgehampton, south of Montauk Highway, but almost all were left behind north of the fields that line both sides of Scuttlehole Road. On the North Fork, created by a second glacial advance which created the Harbor Hill Moraine, the erratics are along the north shore of what are known locally as the Sound Cliffs, a few on land, a few in water, most on the beach between the land and the sound.

On Fishers Island — a remote part of Southold Town closer to Connecticut than to Long Island — glacial erratics are very common and the beaches are very stony. Gardiner’s Island in the Peconics has several erratics, suggesting that there might have been a glacial advance that halted in the bay after the one that created the Ronkonkoma, or “terminal,” moraine and the one that created the North Fork.

At any rate, these glacial erratics are part of our heritage. Lop trees live for a few hundred years at most, and, sad to say, unless more are created they will all be gone shortly. On the other hand, there is almost nothing on earth as permanent as stone. In my mind these large boulders from the northlands have an almost religious meaning, especially those that are covered with lichens and mosses, which themselves may be thousands of years old. Please respect them and leave them be.

Stuffed With Turkey? Walk It Off
Blood Drive Tuesday in Bridgehampton
Holiday Lights and Charitable Efforts in Montauk
END_OF_DOCUMENT_TOKEN_TO_BE_REPLACED