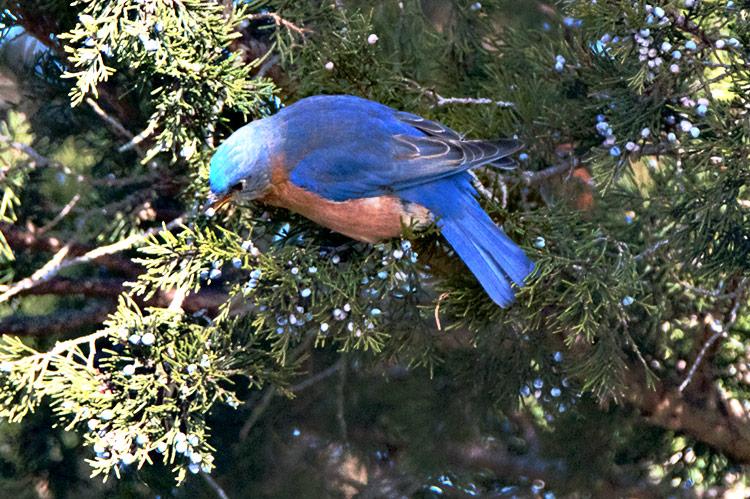 Here on the East End, this year was a very good one for eastern bluebirds, which can still be seen in these parts.
Terry Sullivan
By Larry Penny

While the nation’s bird total has dropped precipitously by three billion birds or so, several species in our area have done very well thanks to human intervention. The osprey population has almost returned in size to what it was before the DDT years, the wild turkey population is flourishing, while the bald eagles have come back to nest in recent years for the first time since 1936. The bluebird has rebounded in East Hampton remarkably since 1985, when local groups and individuals began to work together to bring it back.

A leader of the pack, Kari Lyn Jones, had a number of bluebird boxes built and installed along the East Hampton Airport field’s periphery and elsewhere in East Hampton with the help of the East Hampton Town Natural Resources Department. She enlisted several volunteer box watchers in addition to herself to care for them. She did so well that CBS featured her and the bluebirds on one of its Sunday morning shows. Then, in the late 1990s, a young man named Joe Giunta came to help her. He and volunteers have been minding the boxes and tallying their occupants ever since.

The summer of 2019 proved to be the second most productive bluebird year in 15 years — 112 fledglings compared to 143 fledglings in 2012. During that span 1,101 bluebirds fledged from the boxes. The poorest year was 2015, when not a single baby bluebird made it out of the box alive.

Not only have bluebirds done well in the boxes put up from Camp Hero in eastern Montauk to the airport and Barcelona not far from the town’s western border, but other species have nested in the boxes including tree swallows, house wrens, chickadees, and an occasional flycatcher, the species that frequently hangs a snake skin from its hole to ward off potential intruders.

This year was hot but not as precipitous as past years and new and better pole guards kept raccoons and flying squirrels at bay. Only five stations of the 10 monitored — Camp Hero in Montauk, Springs Park, Napeague, the sculpture garden, and North Haven in Southampton Town — failed to yield a fledgling bluebird. East Hampton Airport led the pack with 70 fledged, while Barcelona around the golf course fledged 25. Ironically, the United States Department of Agriculture, which is responsible for keeping airport pests down, recommended the removal of the airport bluebird boxes, but the town paid them no heed.

It was another profitable year for tree swallows, our most common local swallow of the four species that breed here. They fledged 266 young. Swal lows are big mosquito eaters. If you had some flying around your house during the summer, you may have suffered fewer mosquito bites.

Interestingly, the house wren, each pair of which breeds in a single box while stuffing other boxes in the area with sticks to keep other birds, including Carolina wrens, out, was outdone by the bluebirds and tree swallows, managing to fledge only 65 young.

The three species are all migratory, but like robins, some of the bluebirds hang around into late winter, feeding on cedar berries, holly berries, and bayberries as well as any rosehips that survive through the snow and frigid temperatures. The other two disappear into the south each year to make it through the winter.

The eastern bluebird is our state bird and one of our finest singers. It prefers open fields with a few trees and shrubs, but does not do well in dense woods. One of the reasons it plummeted during the DDT years was that it is also insectivorous and ate insects that had been exposed to the poison during the warm season. Wouldn’t it be marvelous if we could do the same for the bobwhite and other local bird species that haven’t done so well — the wood thrush and brown thrasher, to mention two of them — as we have done for the bluebirds, ospreys, and wild turkeys?

A hearty thanks to all those volunteers who have helped Kari Lyn and Joe over the years. Without their steadfast commitment to helping nature help itself we would not be able to publish such an optimistic “Nature Notes.”

Stuffed With Turkey? Walk It Off
Blood Drive Tuesday in Bridgehampton
Holiday Lights and Charitable Efforts in Montauk
END_OF_DOCUMENT_TOKEN_TO_BE_REPLACED