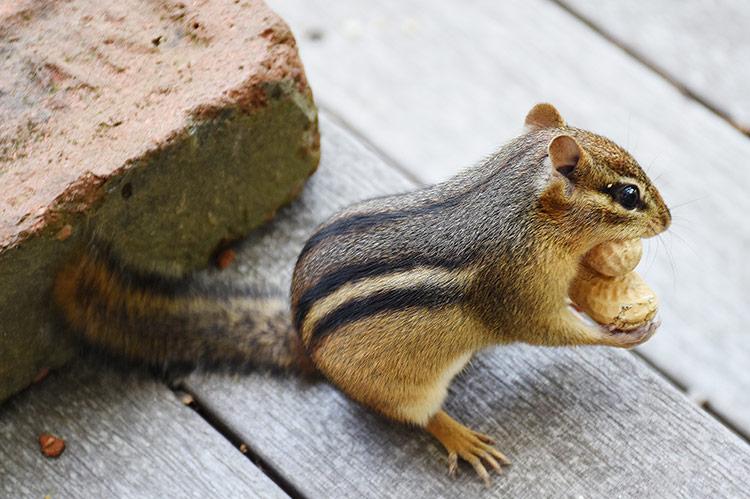 What is it about chipmunks that makes them so adorable? Maybe it’s those big round eyes.
Jean Held
By Larry Penny

I was studying a Jean Held photo of a chipmunk, wondering why I liked this rodent and squirrels so much, as opposed to mice and rats. Julie, my wife, looked over my shoulder and said, “It’s the eyes, those big eyes.” Then I thought of other creatures with big eyes.

She’s right, I thought, as I considered owls and those cute little dogs that glamorous women hold against their chests. I wondered if all animals with outsize eyes had the same effect.

When I was growing up in Mattituck on the North Fork, I used to shoot at squirrels and rabbits with a BB gun, later with a shotgun. I would go to the local dump in Cutchogue at night and shoot rats with a 22-caliber rifle. We didn’t have chipmunks on the North Fork at that time. I wonder if I would have shot at them if we had.

Big eyes seem to reflect curiosity. When I think back on the boys and girls I grew up with, those with big eyes had a certain appeal. Many primates have big round eyes. In tarsiers and lorises they take up almost half of the face. Roundish heads — those of tarsiers and owls — further embellish the attractiveness of big eyes.

Ocelli are round circles, often acting as fake eyes on various animals, especially on butterflies and tropical reef fish. On a few animals such as snakes with small beady eyes, ocelli, or false eye spots, show up on the tail, thus fooling would-be predators who attack the wrong end, an end that often can be regenerated once lost.

Halfway through March, chipmunks are up for good, it would seem. I see ours almost every morning running about, looking hale and sassy. They not only have pretty eyes, they are brown and white striped in an aesthetically pleasing way, another reason for liking them so. I have some friends who invite their chipmunks to the breakfast table. They are mannerly, not like those gray squirrels in Central Park that aggressively demand to be fed.

Flying squirrels also have disproportionately big eyes, as they are most active during the times of day when the light is poor, such as at dawn or dusk. They are cute too, but unlike chipmunks, which are mostly vegetarian, they eat nestling birds and insects and other creatures, and they can be very aggressive when on the hunt. At East Hampton Airport, given the chance, they feed on baby bluebirds and tree swallows in nesting boxes.

Chipmunks have been on the South Fork for at least the last 100 years, but only in the last half-century have they established themselves in Montauk. The southern flying squirrel, like the woodchuck, while a bona fide Long Islander, only got to the South Fork during the last 25 years or so. It is suggested that nuisance animal trappers introduced those two species here, but it has never been proven.

Among fish species, gobies, as well as our native sea robins have very large eyes. The eyes of benthic, or bottom-dwelling fish, tend to be larger than the eyes of fish that live near the surface. Seahorses and their kin are another group of fish species with large eyes, as are sticklebacks. Seals and sea lions have relatively large eyes, but I don’t think they’re cute. They hunt underwater, where big eyes enhance vision.

But of all of these animal species with big eyes, I like the chipmunks the most. Perhaps that is why, although most states’ hunters’ small game licenses permit the shooting of squirrels and cottontails, they are silent with respect to chipmunks, the cutest of them all.