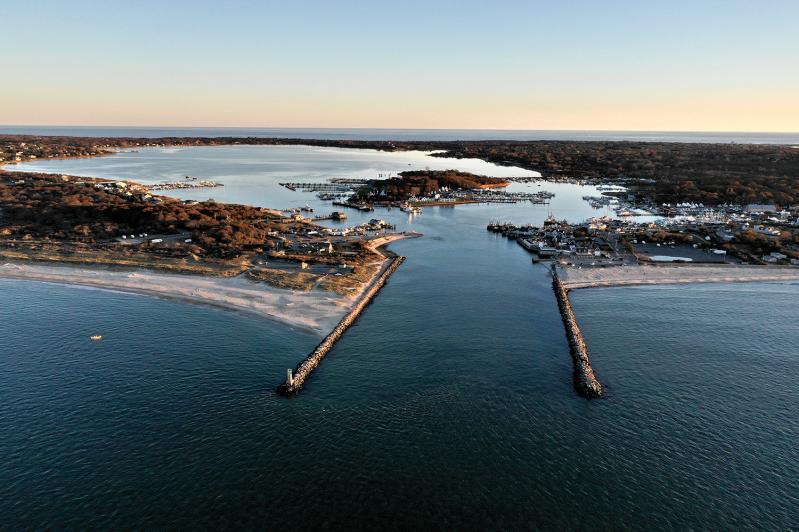 This aerial photograph of the Montauk Inlet taken in 2017 shows how much narrower the beach is to the west of the jetties there, on the right in the picture.
Christopher Bustamante
By Larry Penny

The East End of Long Island came into being more than 10,000 years ago. Up until the present time the North and South Forks have been wearing away, first by the melting of the thick sheets of ice covering them — the South Fork first, then the North Fork as the glaciers melted away and retreated.

The melting of the ice sheets raised the level of the surrounding seas on the order of 30 feet or more, rapidly at first, and very slowly by the time of the 20th century. Now, in the new millennium as the climate warms and the world’s glaciers are melting at an accelerating pace, the rate of rise is increasing from about two millimeters per year to more than three to four millimeters per year. At this accelerating increase, together with the added heat to the oceans causing them to expand, it is imagined that the average sea level rise around the globe will amount to 1.5 feet by 2050, only 30 years from now.

The seas are not only moving up, they are moving in. Locally, one can almost witness this rise by comparing the heights of old bulkheads with recently rebuilt ones. And fresh groundwater ponds rise accordingly, as freshwater is lighter than seawater and is buoyed up by the latter. Take Fort Pond in Montauk, the second largest lake on Long Island. It has increased in elevation as much as two feet in the last 100 years.

In the 1920s a botanist discovered several species of woody plants including a few upland trees on what was then called Brushy Island in Fort Pond’s northwest corner. In 1988 the island hosted a few freshwater wetland plant species including a 12-foot-high tupelo. The island has since been completely submerged by the ever-rising waters.

As the seas rise and the tides continue to roll in and out two times every 24 hours, not all the water from each wave recedes back perpendicular to the line of the shore. Invariably some of it is deflected to the east or west. The majority of the waves come in at an angle, however slight. If they angle in from the west, the water from each break is deflected to the east, in the case of the Atlantic Ocean, toward Montauk Point. If they angle in from an easterly direction, the water is deflected accordingly to the west.

A current is produced in the direction of the deflection. If the current is persistent, it is called a longshore current. In the case of the Atlantic Ocean, the predominant longshore current is westerly. In the case of Montauk, sand put in motion by the crashing waves moves from east to west. That is why Napeague’s ocean edge is almost the same year in, year out. It may lose some sand to the west or to the dunes on its north side, but the loss is compensated for by that sand washing westward from the Montauk peninsula, most of which came from Montauk’s five miles of ocean bluffs.

The same prevailing westward sand drift is experienced on the north side of Montauk. Some sand is lost annually east of Shagwong Point. Such sand would drift all the way to Napeague if it weren’t for the presence of the Lake Montauk inlet. Notice that the old English name “Lake Montauk” persists, when in actuality, Lake Montauk is now a tidal harbor, not a freshwater lake. It was opened to the Block Island Sound and fitted with two stone revetments on either side of the opening in the mid-1920s and has been kept open ever since. It is a federal channel and thus is managed in part by the Army Corps of Engineers, in the same way that Shinnecock Inlet in Southampton Town is managed. Montauk has since become the most important fishing port on Long Island, both commercially and recreationally.

Ironically, perhaps, the Army Corps had more experience with controlling American river waters than marine ones. Before the principle of the longshore drift was established, the Army Corps often put the sand on the upside of the flow rather than the downside. It was during Tony Bullock’s time as East Hampton Town supervisor in the early 1990s that the Corps was to dredge the inlet again; their plan was to place the dredged sand on the east side of the east revetment, on Gin Beach. The town’s Natural Resources Department, which I headed then, reviewed the plan and said, “Wait a minute! Why are we putting the sand on the updrift side while the downdrift side continues to wash away?” The Corps changed its mind and the department went to those on the west side of the inlet for easements to allow the dredged sand to be put on their beaches.

You may have noticed when visiting Gosman’s or the beach west of the west inlet revetment how depleted it has become over the ages. The owners of the houses to the west running almost all the way to Culloden Point have had to continually defend their property from the erosive forces of this and that northeaster or tropical cyclone. Almost every one including a motel or two has some sort of barricade, bulkhead, or rocks, or bulkhead and rocks, protecting it. During Hurricane Bob in 1981, one of them fell onto the beach. (An interesting part of the law came into play following that incident. It seems that if your house burns down or is driven down by a storm, it can be replaced without going through all of the onerous steps to replace it. It only took the building inspector’s signature on the replacement plan.)

The local waterfront revitalization plan written by the town, primarily by Rameshwar Das, became law in the mid-1990s. It provided for relief for hard-hit sections of the coast such as that part immediately west of the Lake Montauk inlet, but any protective structure on the beaches owned by the town trustees would require a variance.

As the plight of the homeowners on the west side of Lake Montauk became worse, in 1992 the town applied to the New York State Department of Environmental Conservation for a permit to move sand from the updrift side, Gin Beach, to the dramatically depleted downdrift side of the inlet. The town got the permit, but the town board voted it down.

Following several meetings between the town, the D.E.C., the county, and the Army Corps, the Corps came up with a plan in the late 1990s to dredge about 235 cubic yards of material from the inlet and the interior channels of Lake Montauk and deposit it on the downdrift side. However, as part of the plan, the town would be required thereafter to maintain the beach and the three subsurface groins that the Corps would install at intervals from each other perpendicular to the shore and out in the shallows of Block Island

Sound. The town refused to go along with the plan, as the installation of revetments no matter how small or unobvious would be in violation of the waterfront revitalization act.

No matter that all of the houses and their trappings along that stretch have legal permits, the west side of the inlet continues to take a beating.