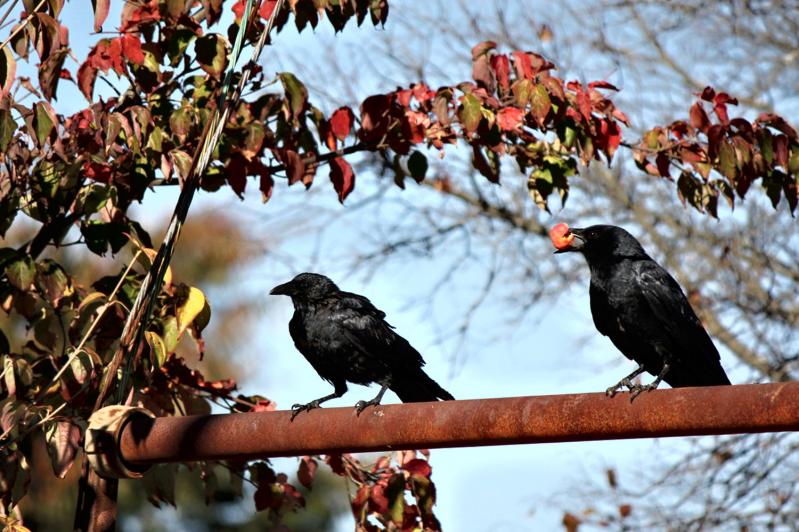 A mother crow found a tasty morsel for her chick on a Kousa dogwood tree.
Terry Sullivan
By Larry Penny

The formal theory of evolution elaborated by Charles Darwin in the1850s is less than 170 years old. It’s taken at least half that time to catch on, although there are still millions and millions of nonbelievers around the world. For those of us who accept the theory, it is still intriguing. It is “survival of the fittest” in one sense, but not totally so. Today, it’s going on all around us: New species are evolving from older ones, hybridization, and isolation, while others are in the throes of extinction for various reasons.

Take the snow goose, for example, a migratory species that breeds on the northern tundra and is divided into two subspecies: the greater snow goose of the Atlantic flyway and the lesser in the rest of America and Siberia. Reduced to some 2,000 to 3,000 members at the beginning of the 20th century, there are now more than five million of them. It is probably the most populous waterfowl in the world.

Strength in numbers, however, does not always ensure survival over the millenniums. In the1800s the wild passenger pigeon was the most abundant American bird, numbering in the millions. The population plummeted in the latter half of the 1800s and the species became extinct in 1914, when the last one died in an Ohio zoo.

The European starling, now found on every continent and common in the Americas since its introduction in the 1800s, is still thriving, although waning a bit in Europe. Judging from the annual bird counts in Eastern North America, it is our most common species, especially during the winter, as it is nonmigratory in the New World. Another European introduction, Passer domesticus, the house sparrow that has been here as long, was once almost as common here as the starling, but is broadly waning, while the rock dove, or European pigeon, is found throughout North America, and it seems that as long as there are farms and cities here, it will persist well into the future. Of the three foreigners, it is the only one that is cultivated throughout the world.

These and other transplants, such as the house finch from America’s Southwest, are filling niches that local native species have occupied for centuries upon centuries, and some of those native species are slowly losing out to the competition from abroad. In my lifetime I have seen the diminution of several Long Island birds, including the eastern meadowlark, Baltimore oriole, bobwhite, song sparrow, and chimney swift, while the numbers of other natives — the red-winged blackbird, ruby-throated hummingbird, robin, mourning dove, tufted titmouse, cardinal, and Carolina wren — have decidedly increased. For every species that is coming, another one is going, it might be said. Perhaps the most recent success story is the rapid increase in the number of fish crows in Long Island’s downtown areas.

We know the climate is warming, therefore we can expect many more southern birds, such as the fish crow and boat-tail grackle, to settle here and compete with the oldsters. In general, however, as the annual censuses have shown in this millennium, the overall numbers of American birds are decreasing, perhaps by the millions.

Birds will be birds, no matter this or that plight. Robins and bluebirds don’t like grain or other birdseeds, so you rarely find them indulging at feeders. In the winter, those that stick around feed on cedar berries and other fruits that last in­to the cold months. Come spring, as long as there are green lawns, there will be robins; as long as there are nesting boxes, there will be bluebirds.

There are omnivores, birds that will eat anything, such as the American crow. Then there are others that are strict vegans, carnivores, insectivores, etc. Which type of eaters have the best chance of long-term survival? It’s hard to imagine crows ever becoming extinct. On the other hand, it seems as if there will always be earthworms and winterberries enough for robins. And as long as there are winter birdfeeders there will be winter bird species feeding on them. If we humans should go — and our future is beginning to look bleaker by the moment — there will be no winter birdfeeders, which might kick off a massive die-off of feeder bird species.

Every time I see British nature programs on television showing the African veldt and other habitats, with the large mammals that occupy them, I can’t help noticing the various species of small birds feeding on the backs of elephants, cape buffalo, rhinoceroses, and hippopotamuses. Some of them are called “tick birds.” I never see such birds on the backs of American horses, deer, dairy cows, or cattle. Now, there’s an opening just hungering for exploitation!