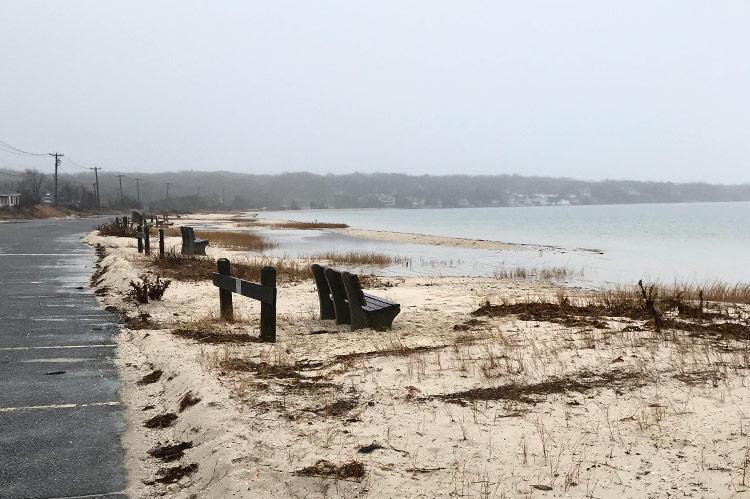 Last Thursday we were visited by a full moon. It was mostly hidden by clouds, but just because the seas can’t see the moon dosen’t mean they don’t feel its tug. Winds can push the water up and in, duplicating the moon’s efforts, and causing us to experience very high flood tides. On Friday and Saturday tides were almost as great, and Long Beach in Noyac, down the road from me, looked like a disaster zone, not that different from the aftermath of Sandy in 2012.

Seaweed was thrown up onto the beach road used by beach visitors. Some sand made it into the road as well, along with some stones. Long Beach together with Short Beach to the east is slightly bowl shaped. If the winds are northeasterly, the littoral drift is east to west. The west side, where the Salty Dog once stood, is stonier than the east side. It takes some gusto to pile all of those stones in a big heap. As you walk east, the beach becomes sandier and sandier.

Yet the beach has been there — minus the road — since early settler times. Short Beach and Long Beach were cut off from each other for a very long time by a channel, which let Noyac Bay in and out of Sag Harbor Cove twice every 24 hours. When Long Beach Road was built in the late 1800s, that tidal opening persisted. The water went out and came in under a short bridge.

After the storms of the 1980s washed out most of the bridge and walkway, the tides no longer ran. There were two tidal openings before that time with respect to Sag Harbor Cove — the big one under the 114 bridge linking North Haven with Sag Harbor and the smaller one under the nexus of Long Beach and Short Beach Roads.

Tidal flushing has always been good for tidal waters, and one wonders if there has been a reduction in the clam and fish population in the cove since the opening to Noyac Bay closed. I pass by the inner waters of the cove from time to time. During the summer, when the outer beach on the bay is generally in full use, those waters are often reddened by concentrations of phytoplankton. One or two cormorants generally dry out on the longstanding glacial erratic that is only under water during very high tides. Ospreys have occupied at least four nests on the utility poles along the road and in the marsh for several years now. PSEG puts up special poles topped by basket-like devices in the hope that the ospreys will use those poles instead of the ones carrying the wires to North Haven and beyond.

There is almost never a day when the beach isn’t populated by a host of gulls. Most of the gulls are herring gulls, perhaps the world’s most common beach bums, or at least the eastern Atlantic Coast’s most common. They are very polite. They look at you while you’re snacking and they are often rewarded for their patient and persistent eavesdropping. During the off-season they fly over from the ocean to check the tidal leavings. They know the tidal periods as well as any local. If they were absent, a good many of us would miss them.

A very interesting thing often happens on Long Beach after periods of wind-driven waves and moon tides. The beach between low tide and high becomes a series of runnels — some big, some small — stretching from Short Beach almost to the junction of Long Beach and Noyac Roads. The runnels often have killies and other small fish in them, as well as wave-washed kelp. They are miniature tide pools, not like the ones among large rocks on the West Coast, but interesting little areas where you might find a starfish, sand dollar, moon jellyfish, and the like.

The beach is never the same one day to the next. Sometimes — but not this fall and winter — the beach at the water’s edge will be littered with scallops. If the gulls don’t get there first, they can make a nice lunch. More often it is littered with snails, jingle shells, a few conches and crabs mixed in. January comes and the beaches become mostly bare, but the gulls hang on. The smaller ring-billed gulls and larger great black-backed gulls join the herring gulls. A few crows pigeon-toe along the tidal wrack lines searching for this or that edible. The herring gulls, not the others, are dropping whelks and crabs from 40 or 50 feet in the air, hoping they will break open to be fed on. Funny, only herring gulls indulge in that aerial bombing. The other gull species see them going at it, but none try it on their own.

Meanwhile, the common loons and horned grebes swim and dive in the bay waters and mergansers and buffleheads work the coves.