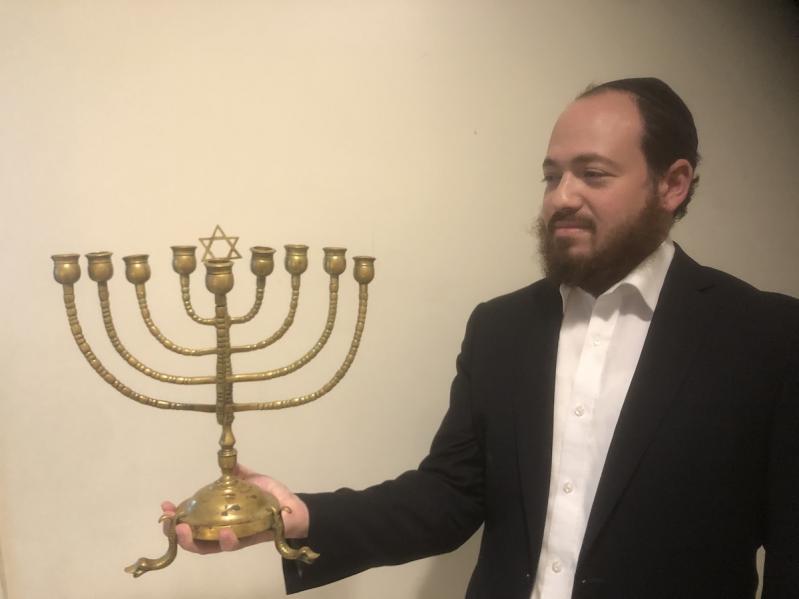 This menorah dates back to the late-19th century, when it came to the United States with a family by the name of Denenholz, emigrants from Vienna. The city was once a prominent hub of Jewish culture and community in Europe, but its Jewish population was all but obliterated by the Nazis in the winter of 1938.

In 2018, the descendants of the Denenholz family donated their historical menorah to the Center for Jewish Life, which had, only one year before, established its own cultural and spiritual space on Long Island Avenue.

"Often when I come in and look at that menorah, it dawns upon me that it has, in its existence, seen the world go through monumental events that threw existence into turmoil -- the First and Second World Wars, the rise of communism, the Spanish flu, the pandemic we're in now," said Rabbi Berel Lerman, who leads the center. "But nonetheless, this special menorah stands in its corner in our lobby and continues to endure, having seen the world go through all these huge ups and downs and at times seem like it was coming apart at the seams."

The holiday of Hanukkah commemorates the Maccabees' triumph over their Syrian-Greek oppressors in the second century B.C. As the story goes, when they went to the temple to rededicate it and give thanks to God for the victory, they found that the oil to light the candles had been tainted, and just one night's worth of pure oil remained. Miraculously, that single night's supply lasted for eight nights. A menorah is a candelabrum holding eight candles.

Not only will Rabbi Lerman light the Denenholz menorah this year, which will be live-streamed on Zoom on Saturday, Dec. 12, at 6 p.m., but the Center for Jewish Life will also give out menorahs and candles to people who need them. The center's number is 631-938-6202.

Rabbi Lerman called for everyone to light a menorah this year. "The message of Hanukkah this year, 2020, when the world is experiencing a pandemic and at times things may seem helpless . . . is, we always must realize that the circumstances are never helpless," he said. "It's never entirely in despair, because ultimately there is a higher power that we can connect to. Sometimes when we become hopeful, that in itself helps us overcome challenges."

In addition to its menorah lighting on Dec. 12, the Center for Jewish Life will display an ice carving of a menorah, to be lighted on Dec. 13 in front of its building, at 24 Long Island Avenue in Sag Harbor.

Chabad of the Hamptons, on Woods Lane in East Hampton, will light the menorah on Thursday, Dec. 10. Its annual menorah car parade will be held on Sunday, Dec. 13, starting at the Chabad at 3:30 p.m. and heading to Herrick Park, where latkes "in Covid-safe packaging" will be handed out.

The Jewish Center of the Hamptons will have a Zoom menorah lighting at 5 p.m. on Dec. 10, followed at 6 the next evening by Shabbat on the Beach, at Main Beach.

Another menorah lighting will take place at the Clubhouse in Wainscott, 174 Daniel's Hole Road, on Dec. 12 at 5 p.m., followed by mini-golf. There will also be a lighting on Dec. 13 at Stuart's Seafood Market in Amagansett, 41 Oak Lane. Service information for the Conservative Synagogue of the Hamptons and Temple Adas Israel was not available by press time.