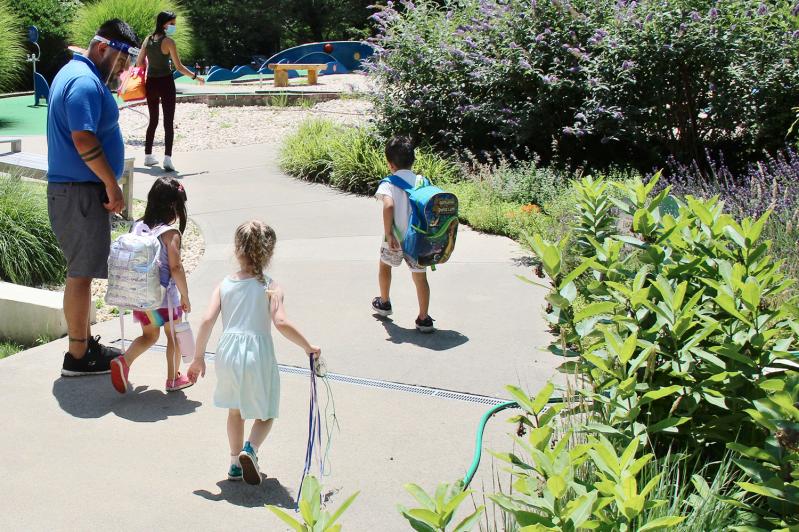 Children and families will soon be welcomed back officially to the Children's Museum of the East End, which has started hosting small classes and a camp ahead of its reopening on Aug. 3.
Durell Godfrey
By Christine Sampson

A lot has happened since March 14, when the Children's Museum of the East End in Bridgehampton and other popular attractions closed their doors because of the Covid-19 pandemic, which was just starting to wreak havoc here at the time.

School work and activities for kids were all suddenly online, school sports were canceled, and birthdays and other milestones were celebrated with car parades. An acute multi-inflammatory illness began showing up in children who were exposed to Covid-19, even claiming some young lives.

But lessons about safety amid Covid-19 were learned along the way, and now, weeks after other museums and galleries were allowed to reopen as part of the governor's phased economic recovery plan, CMEE is opening its doors as well.

"It's been a long time coming, but we're looking forward to it," Steve Long, president of the museum, said this week. "A tremendous amount of work has been going into getting ready."

CMEE will officially reopen to the public on Aug. 3, a Monday. Families will be able to make online reservations for two-hour blocks of time. The museum has enriched its outdoor offerings with games like Giant Jenga and made its miniature golf course free with the price of admission.

The museum is following in the footsteps of organizations like Guild Hall in East Hampton and the Madoo Conservancy in Sagaponack, which reopened in late June and have said they are limiting the number of visitors at any one time or are requiring reservations. CMEE will allow no more than 48 people in at a time Ñ that's just 20 percent of its usual capacity.

Mr. Long said extra attention is being paid to cleanliness.

"We already had a very robust cleaning protocol, but we're making those procedures even more rigorous and ongoing," he said. "It will almost feel like you have a custodian coming after every time a family visits a different part of the museum. We'll be doing deep cleanings after each visiting time slot."

The museum held a soft opening this week for specific classes and a day camp. Mr. Long said it was done that way to work out any "hiccups" that may occur.

And since the beginning of the pandemic, CMEE has doubled as a food pantry for about 75 families, who come to collect bags of canned goods and fresh provisions like milk and vegetables on Thursday afternoons. That's why the museum will remain closed to the public at that time after Aug. 3, Mr. Long said.

"We did a survey in Spanish and English and found there was something like 85 percent of our families in our outreach programming who had lost their jobs with the shutdown of all of the businesses in mid-March," he said. "Their number-one concern was putting food on the table."

General memberships were paused on March 14. Those who purchased an annual CMEE membership in January, for instance, will have about four and a half months tacked onto the expiration date. "We're eager to reopen, one reason being the enormous financial burden that it's cost, with the museum not having any earned income," Mr. Long said. "No admissions, no memberships, no birthday parties — nothing since the middle of March."

This week, the kids in CMEE's newly resumed classes were so happy that they didn't want to leave when the sessions were over.

"We've been getting emails, phone calls — there has been a lot of interest in when the museum is going to reopen," Mr. Long said. "They missed the museum so much."