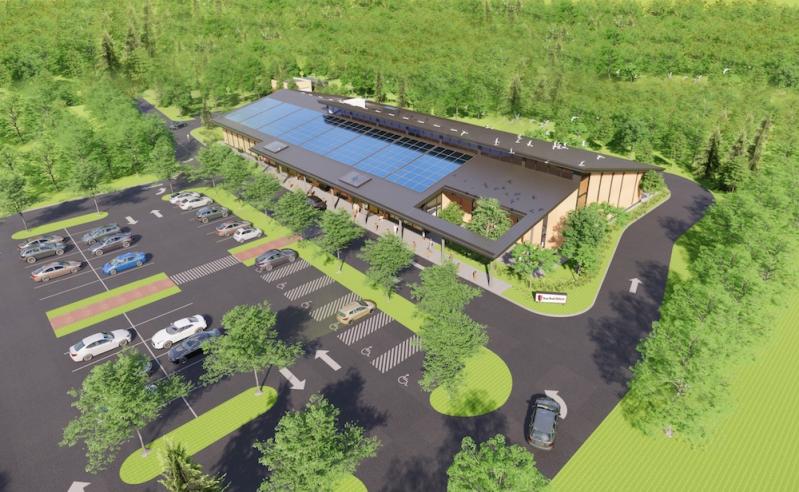 Stony Brook Southampton Hospital has unveiled its latest design for a proposed $35 million emergency room annex in East Hampton. The hospital hopes to begin construction next year, and have the facility operating by the summer of 2022.

The major purpose of the annex is to assess, diagnose, and stabilize patients — "anything up to the point of an intensive intervention such as surgery or catheterization," said Robert Chaloner, the hospital's chief administrative officer, in making the announcement on Monday.

In addition to being a 911-receiving facility serviced by local E.M.S. teams, the building will have its own ambulance on site to transport patients needing more extensive care to a full-scale hospital. But "the overwhelming majority of residents could come right here and not have to go any farther," Mr. Chaloner said.

The annex will be built at 400 Pantigo Place, on a town-owned 4.5-acre parcel that will be leased for $20 per year to the Stony Brook Hospital Association, the not-for-profit corporation that operates Stony Brook Southampton Hospital. After the initial 50-year lease expires, the association has the option to extend it for an additional 49 years.

At present there are two playing fields on the site. The association has agreed to provide $1.75 million for the construction of new ones, to be built on property provided by the town. The zoning of the parcel will need to be changed from parks and conservation to commercial-industrial.

During a discussion about the zoning change at a town board meeting last August, a majority of members agreed that commercial-industrial would be appropriate. Councilman Jeff Bragman, however, worried that the facility would overwhelm the neighborhood. "My concern is how much building we are going to get," he said.

Previously, the association had proposed a 27,700-square-foot, one-story facility, but the footprint has since been reduced to 23,830 square feet, said David Larson, the architect from Perkins Eastman who designed the space.

"We scaled it back, and went as low as you can go and still meet the requirements for health care," said Mr. Chaloner. "As well as being an emergency department, we want to provide testing, a laboratory, radiology, and other things that people are driving to Southampton for." An application for the zoning change is in the works.

The annex will be able to conduct X-rays, CT scans, bone densitometry exams, mammograms, and ultrasounds. Space will be reserved for an M.R.I., to be purchased in the future.

Obstetrics and gynecological services will also be available, up to a point. "We won't deliver babies there. I mean, we could, but the goal would be to have deliveries at a hospital," Mr. Chaloner said.

Mr. Larson instead designed a streamlined structure clad in a light wood-like exterior that features an abundance of floor-to-ceiling windows.

"I live in the Northwest Woods, and I thought, 'Oh, this looks like some of the houses up here,' " Mr. Chaloner said of the design.

The building, which will have solar panels on the roof, was initially going to span its parcel from north to south, "but we decided to rotate it so we could capitalize on solar gain and daylighting," said Mr. Larson. A clerestory, a high section of wall containing windows above eye level, will run along much of the roof, providing ample indoor light.

The main parking area will be at the southern end of the lot, with trees to break up the expanse of asphalt and provide shade. A ring road will lead visitors to the covered drop-off area in front,  and ambulances will follow the same road to drop-off bays in back of the building. The outdoor space includes two plazas, one in front for visitors and one in back for employees on break. The site plan also leaves room for a bike path to be added at a later date.

A rain garden will be installed to capture runoff from the roof in an underground recharge basin, and there will be electric-car charging ports on the property.

"One item still up in the air, no pun intended, is the helistop," said Mr. Larson. A helicopter landing area, for patients who must be seen elsewhere, was to have been included on the grounds, but a nearby water tower, power line, and surrounding trees made that impossible. The association is now thinking of locating the helistop on a separate parcel to the west, next to a town parks maintenance building. "We don't anticipate much usage of it," Mr. Chaloner said of the landing pad, adding that he's sensitive to residents' frustration with helicopter noise.

For the interior, said Mr. Larson, "We wanted to imbue the space with a Scandinavian feel — very light woods, metal, glass — make it feel homey and bright and happy. A lot of hospitals in the past were all white, and that becomes a little boring, so we're introducing accent colors that are harmonious with the environment and nature." His firm is particularly focused on "material health," he said, and will use only substances that are PVC-free and contain no harmful chemicals.

In the waiting area, large windows will provide visitors with a connection to nature. A final decision on the seating layout has not yet been made, said Mr. Larson, because discussion about the need for social distancing is ongoing.

"We're learning a lot through the Covid epidemic," said Mr. Chaloner, who remarked that the ring road and covered entryway of the proposed facility would make a perfect site for drive-through testing.

The project will be funded in part by a $10 million grant from New York State that is tied to raising the same amount from private donations. Mr. Chaloner said the association had met the $10 million milestone, and is optimistic about raising any remaining funding.

The town board resolved on Tuesday to lead a review of the potential environmental impacts of the proposed zoning change for the facility. The vote was 4-0, with Mr. Bragman, who said the planning board was better suited to the task, abstaining.

During a discussion of the matter, Councilwoman Kathee Burke-Gonzalez said she had made a list of the procedural hurdles the proposal would have to overcome in the near future. The planning board will begin its discussion of the site plan on Aug. 5, she said, and the architectural review board will weigh in on the design on Aug. 13. The town board will make its determination about the zoning change on Sept. 3, and if it approves it, a public hearing will be scheduled for Sept. 17.

A final vote on rezoning, which would determine whether or not the complex can be built as now planned, will likely take place on Oct. 15.