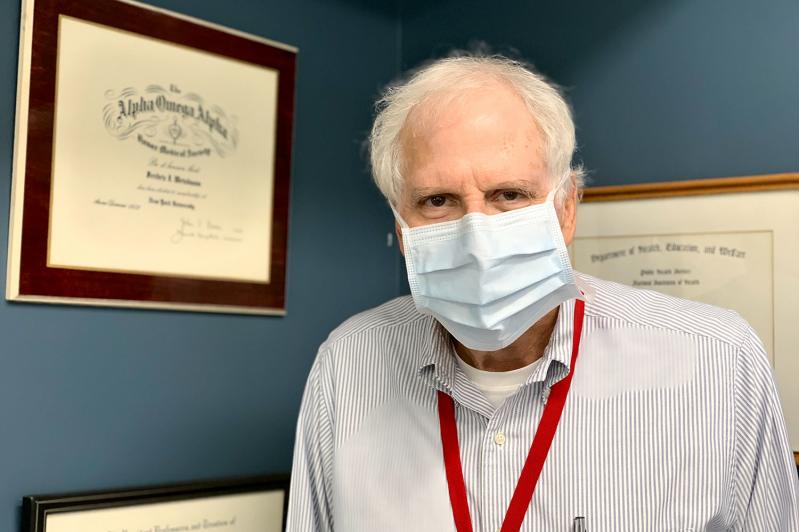 Masks and social distancing work. That is a key takeaway from a recent conversation with the head of medicine at Stony Brook Southampton Hospital.

In a September interview, Dr. Fredric I. Weinbaum, the chief medical officer and chief operating officer, provided an overview of the Covid-19 pandemic and discussed how the medical system was better positioned to manage if a fall or winter resurgence occurs. He also described the hospital's procedures for admitting patients during the pandemic, as well as improvements he has seen in testing.

Meeting a mandate from the New York Department of Health to be able to handle a 90-day surge in virus cases like that seen in the spring, Dr. Weinbaum said the hospital was well positioned with medicine, personal protective equipment, and ventilators. "The systems won't be overwhelmed." There were three areas in which the new readiness was apparent, he said. "We know how to deal with a surge of demand because we have experienced it." The region is better able to do testing. And new knowledge about treatments, such as Remdesivir and steroids give doctors greater confidence. "We also know what doesn't work," he said, pointing to hydroxychloroquine as an example.

Infection rates are relatively low on the East End of Long Island. Suffolk County as a whole has maintained a positive test rate below 1 percent in past weeks -- an important threshold. Case counts among residents have stayed steady, though the nature of how test results are logged by the state might mask higher numbers in places with a lot of visitors or part-time home occupants, he said.

One observation about the influx of people from other areas fleeing the virus since March has stood out for Dr. Weinbaum. "People are coming out here because they are afraid," he said, which means they are more likely to follow recommendations on social distancing and other precatutions.

Most of the tests conducted at the sites managed by Stony Brook Southampton are sent to a commercial Long Island laboratory. The majority of the results return within 24 to 48 hours. The hospital has in-house test capability, used for admitting purposes and surgical cases. Those tests have a two-hour-maximum waiting period for results. The hospital performs about 25 to 30 tests daily, he said. Additional equipment is on order, but delayed because of the unprecedented demand.

Whether from the hospital or a private lab, results are sent to the state and associated with the address a patient gives during test administration. "They might not have acquired the infection here. In terms of risk, it is important to know where they are coming from," he said.

What kind of test matters as well. The nasal-swab P.C.R. test is the gold standard; so-called rapid tests are significantly less accurate, he said. P.C.R. -- polymerase chain reaction -- tests detect molecular clues unique to Covid-19, while the faster, reaction-based tests look for antigens. The State Department of Health requires P.C.R. tests before surgery is allowed to proceed, he noted.

With the onset of colder weather and schools reopening, there is reason for added vigilance, but education officials have done a good job in making preparations, he said. Flu shots are critical, he said, so that health systems are not over-whelmed, though he said that the habits, such as wearing masks, maintaining distance from others, and hand washing that help keep Covid-19 at bay could also help keep influenza under control.

"We are really proud of the communities and the sacrifices businesses have made," he said.

"We're glad the prevalence is low, but it's not low by accident. It's low because of the steps people have taken," Dr. Weinbaum said. If community members and visitors to the region drop those precautions, "We'll be right back where we were," he said.

"'Superspreader' events were just normal activity before Covid. If we return to doing those, you can expect there to be a return to infection."

On Tuesdays and Thursdays, tests are offered from 10 a.m. to 4 p.m. in the East Hampton High School parking lot on Long Lane in East Hampton. Appointments must be made by phone at 631-668-3705.