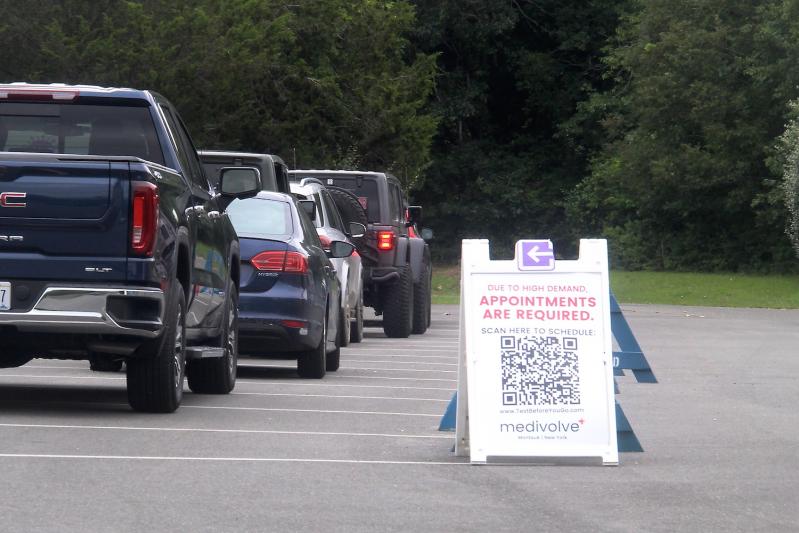 That trend continues this month: Mr. Van Scoyoc said that the East Hampton site measured a 10-percent positive rate among 1,181 tests in East Hampton and the same rate among 452 tests in Montauk between Sept. 9 and 13. The positive rate was even higher between Sept. 14 and Sunday, with 12.2 percent among 1,263 tests at the East Hampton site and 13.5 percent among 370 tests in Montauk. "While I was hoping the numbers would decrease given the fact that fewer people may be visiting from out of town," Mr. Van Scoyoc said, "there does seem to be ongoing spread of the Delta variant, which is much more contagious." He again asked that people wear a mask when they are indoors and get vaccinated if they have not already done so, and said that the town is exploring an expansion of testing capacity and speeding turnaround time for reporting of test results.

Suffolk County reported a 5.2-percent positive rate on Sept. 20, with a seven-day average of 4.2 percent — a slight decline from earlier this month — and Stony Brook Southampton Hospital reported a positive rate of almost 9 percent on tests conducted on Sept. 9, 10, 11, and 13. As of Tuesday, there had been 2,060 cases of Covid-19 in East Hampton and 6,753 in Southampton Town.

Also known as the HERO Act, it was signed into law in May and is meant to protect employees against exposure and disease during a future airborne infectious disease outbreak. It requires private employers to implement workplace safety plans and otherwise comply with the airborne infectious disease exposure prevention standards defined in the act. The law also protects employees from retaliation for making a complaint about an employer's failure to comply.

"The plans must comply with state standards regarding daily health screenings, testing, and quarantine; the use of face coverings and personal protective equipment; social distancing; hygiene; building airflow technology, and cleaning and disinfection," according to a Sept. 15 statement from East Hampton Town Hall. Employers can use a model safety plan as crafted by the State Department of Labor or develop their own safety plan in compliance with HERO Act standards. The plan must be distributed to all employees and posted in a prominent location at each worksite.

Concern over the highly transmissible Delta variant of Covid-19 spurred East Hampton Town to suspend in-person meetings this month, just two months after resuming them. Town offices remain open, but a mask mandate for all, vaccinated or unvaccinated, was reinstituted. Mr. Van Scoyoc told a caller at Tuesday's work session that town employees across multiple departments, including the Police Department, have been sickened by the virus and are out of commission.

As of Monday, just under 1.7 million Long Island residents had completed a Covid-19 vaccine series, according to statistics provided by the state, or around 57.4 percent of the roughly 2.834 million residents of Suffolk and Nassau Counties; that percentage includes children under 12, for whom the vaccines have not yet received emergency use authorization.

The Pfizer vaccine is administered to those 12 and up at Parrish Memorial Hall at Stony Brook Southampton Hospital on Tuesdays, Wednesdays, and Thursdays from noon to 6 p.m. and is also available through pharmacies and physicians' offices. Third-dose vaccines are available only to the moderately or severely immunocompromised.

Covid-19 tests are available at Parrish Memorial Hall as well as by appointment at the testing sites in East Hampton and Montauk and through some physicians' offices and urgent care facilities.