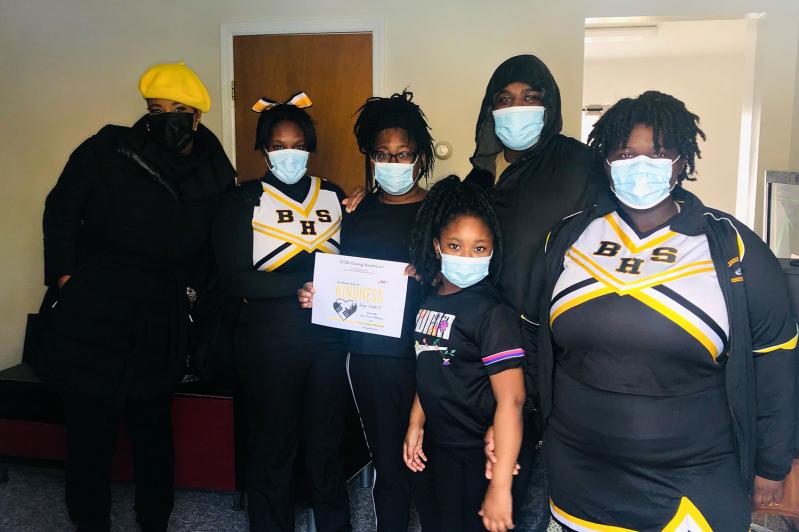 From the parking lot in the mall to the emergency room in the hospital, community members are showing how kindness — any time, any place, to anyone — can be a real shot in the arm during the pandemic.

"It's been going on for a year, and it still gets you every time," said Gloria Capogna, an E.R. nurse at Southampton Stony Brook Hospital, speaking of watching Girl Scout cookies at work. "It's ridiculous how much of an attraction it draws," she said, citing an almost "goofy vibe" that permeates the hospital's high-pressure environment when there are cookies on offer.

Jordyn Harris, 8, and Bianca Feliz, 9, of Brownie Troop 1324 are responsible for their fair share of cookie dispersion and mood lifting, with support from their mothers, Erica Harris and Lissette Feliz, who is also a troop leader. As of Monday, Jordyn had raised about $300 after selling 70 boxes of cookies to donate to the hospital. Bianca said she had felt sad seeing people struggle "trying to find the medicine." Scouts could not help with that, she said. Instead, "we give the food to our heroes."

Their girls took charge, said Ms. Harris and Ms. Feliz, and with 11 fellow members of the troop made signs in January and stood outside the hospital's glass paneling. Every time a nurse or doctor walked by, they would clap for them. The troop, led by the two adults, also donated about 80 pre-packaged meals from local restaurants to the health workers.

Ms. Capogna, the nurse, said she was amazed that "restaurants were unable to stay afloat, but still sent 150,000 meals to Stony Brook." Not having to go home and cook dinner, instead being able to pick up a meal on her way out of work, gave her not just comfort but extra time to spend with her patients, she said. "We heard you, we still have the letters and cards, pictures and selfies. I definitely still can't believe the pandemic is going on, and I still can't believe they remember," she added.

The community care feels almost like a "parental unit," the nurse said, what with receiving so many "notes, protein bars, Chapsticks, tissues, vitamins. For us, extra protection takes time to put on and remove," she said, so the little things go a long way.

Random acts of kindness have become quite the specialty of the Rev. Tisha Williams of Bridgehampton's First Baptist Church. On Feb. 17, which in fact was Random Acts of Kindness Day, she began an initiative to establish more of a "kindness culture." The pastor and members of her church took to the streets, placing notes of encouragement on car windshields in Bridgehampton Commons. Using money set aside in the church's mission fund, they also presented gift cards to people outside Dunkin' Donuts, and paid for five shoppers' groceries, about $100 each, at King Kullen.

Reverend Williams followed one couple at Petco to the register and bought their pet supplies for them; paid for someone's coffee at Starbucks, and brought cookies to the staff at GoHealth Urgent Care. Every single time, she reported, the recipient said, "Well, now I have to do something!"

"There were times when Jesus performed miracles and said, 'Tell no one,' and other times he said, 'Go show yourself,' " the pastor said, laughing. "We don't make it public to boast or be prideful."

One man, dumbfounded that Reverend Williams wanted to pay for his gas, said, " 'Get outta here!' " A woman at King Kullen clapped her hands together: " 'Are you serious? I'm gonna cry!' "

Church members, through the Bridgehampton Child Care and Recreational Center, also sought out needy residents of the community. One family was gifted haircuts; others were surprised with home goods.

Lakisha Gant of East Hampton said she and her six children received the church's random act of kindness at just the right moment. "We were homeless for five years," she said, when, just at the same time she was approved for an apartment at the Springs-Fireplace affordable housing complex in East Hampton, she received the church's gift of pots, pans, clothing, curtains, dishes -- "stuff I haven't found in so long," she said. A set of ceramic bowls is particularly special to her.

Ms. Gant explained that she and her 18-year-old twins, Jaeda and Jordan, 15-year-old son, Jahvon, 15-year-old niece, Akasha, and 7-year-old, Jaylah, had been staying at a shelter in Bellport. Her oldest, Jamari, 21, was in college. The Bridgehampton School was seeing to the commute for the children, she said, and Ms. Gant said her kids do well there, but that their living situation was not good for them. She had started to notice an eye twitch in her youngest, and attributed it to stress at the shelter.

She described their quarters as "cockroach-infested," with "all different kinds of people and families, smoking in rooms . . . and then on top of this, my kidneys were about to be on dialysis, that's when I went to the hospital. . . My main thing was, I just wanted the kids to have a place to stay. And then we got a phone call from the child care center, saying 'We just found a place!' "

The eye twitch was gone soon after they moved.

Congregants of the First Baptist Church have been randomly kind on their own, too, not only as a group. "Love is an action, it's something that you show to someone that really shows where your heart is" said Deacon Kent Brown, who's been shoveling neighbors' driveways.

Larry Williams, who is married to Reverend Williams, takes his bottles back to King Kullen every week to recycle them. As one of his acts of kindness at the end of February, he presented $15 worth of bottles to a stranger. When the man asked what he could do in return, Mr. Williams told him to pay it forward. "You don't have to be closer than six feet [during the pandemic] to restore love," he said. "One of the young ladies that we identified to help in the supermarket, we picked because she had a 1-year-old girl. When she turned around, we realized it was someone we had not seen in years, who helped us out when we needed help five years ago." Mr. Williams said that was his most serendipitous random act.

Triste Napier, a phlebotomist and medical assistant at New York Cancer and Blood Specialists, was appointed by the pastor to head up the church's "kindness ministry." Ms. Napier, who recently bought two dozen roses to give to her patients, said she had a few more ideas for Pastor Williams on kindness initiatives. "She's gonna say, 'Just go ahead, just go,' " she predicted.