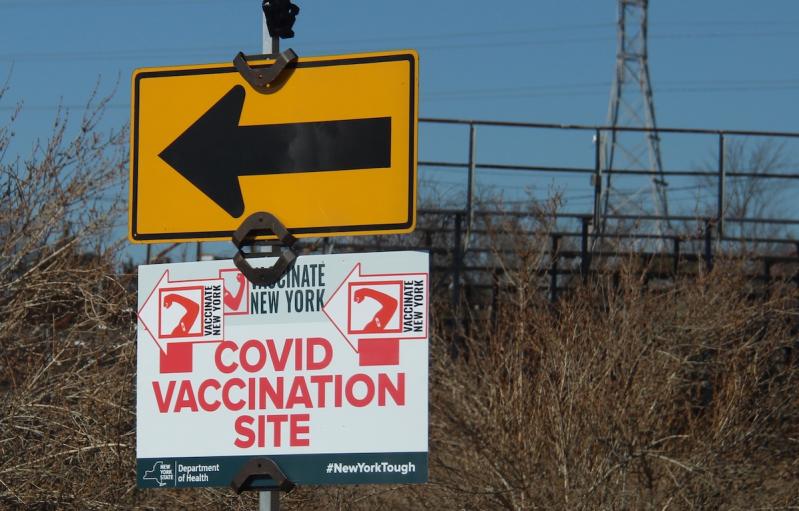 A sign points the way to a state-run mass vaccination site that opened on Friday at the Stony Brook Southampton college campus.
Durell Godfrey
By Christopher Walsh

New York State residents age 50 and above will be eligible to receive Covid-19 vaccines starting on Tuesday.

Gov. Andrew M. Cuomo made the announcement on Monday during an event at Grace Baptist Church in Mount Vernon, where he launched the state’s Roll Up Your Sleeve campaign to encourage houses of worship to sign up as vaccination sites. With multiple clergy in attendance and the Rev. Al Sharpton appearing via video, the governor announced that the church will be a pop-up vaccination site.

On Sunday, pharmacies were given the go-ahead to vaccinate not only people 60 and over and teachers, but also people with certain underlying conditions. Appointments at state-run vaccination sites, including one at the Stony Brook Southampton college campus, can be made on the state's Am I Eligible web page. East Hampton Town also has a list of vaccine locations in the area with links for making appointments on its website, ehamptonny.gov.

On Tuesday, Suffolk County Executive Steve Bellone announced the opening of a new county-run vaccination site at the H. Lee Dennison Building in Hauppauge. Appointments at county vaccine facilities can be made online at vax4.suffolkcountyny.gov.

New York’s vaccine rollout began in December with those manufactured by Pfizer-BioNTech and Moderna eligible to the most vulnerable populations including those 75 and above and front-line health workers. A single-dose vaccine by Johnson & Johnson has since received federal approval and is now being distributed, and the state’s vaccine eligibility was expanded to other at-risk groups and those 60 and above last week. With an accelerating weekly allotment of vaccines, New York has again expanded eligibility.

Surrounded by a diverse group of clergy, the governor said, “Today is a new day, and the signs are all around us. . . . The first thing we have to do is take the vaccination." Production is ramping up, he said, and “over the next few weeks you’re going to see the production of the vaccine pick up.”

A fourth vaccine, by AstraZeneca, may soon receive federal approval for emergency use.

For the Roll Up Your Sleeve campaign, "we’re deploying a foundation of our society, our faith-based community,” the governor said. All houses of worship can begin to serve as vaccine distribution points starting next month. As part of the campaign, medical providers are being asked to volunteer to partner with houses of worship to conduct vaccination clinics. The campaign, according to a statement from the governor’s office, builds on the state's efforts to bring the vaccine to underserved communities and combat vaccine hesitancy.

The governor previously encouraged religious leaders to partner with the state to establish pop-up vaccination sites at their facilities, and more than 200 houses of worship have signed up since March 8. Interested medical providers and houses of worship can sign up at covid19vaccine.health.ny.gov/roll-your-sleeve.

“Today’s visit fulfills a commitment” to the Black community, said the Rev. Dr. Franklyn Richardson of the National Action Network, “that those who were first in line to die from Covid would not be the last in line to get the vaccine, the vaccine that is helping us to crush Covid.“ To the governor, he said that “Your leadership set the standard for how to address the challenges of Covid.”

Speaking of historical mistrust and reluctance, Mr. Richardson added that the governor “also made it clear that vaccines are safe, all three. I think you’ve done a magnificent job in letting the Black and brown communities know that the vaccine is safe.” On March 17, the governor received the Johnson & Johnson single-dose vaccine at the Mount Neboh Baptist Church in Harlem.

“I want people to know I was hesitant,” Mr. Sharpton said, around one hour after receiving his second vaccine dose at Harlem Hospital Center. “I was one among many that said we need to be sure, because history has made us skeptical. But as I saw Black doctors . . . step up and say, ‘I was part of making this vaccine,’ as we saw Black experts around the country speak up, and as we saw people still being afflicted, we don’t have the luxury of waiting. . . . We must do this.”

The governor made no mention of the multiple accusations of sexual harassment aimed at him in recent weeks or criticism over the state’s handling of nursing homes during the Covid-19 pandemic.