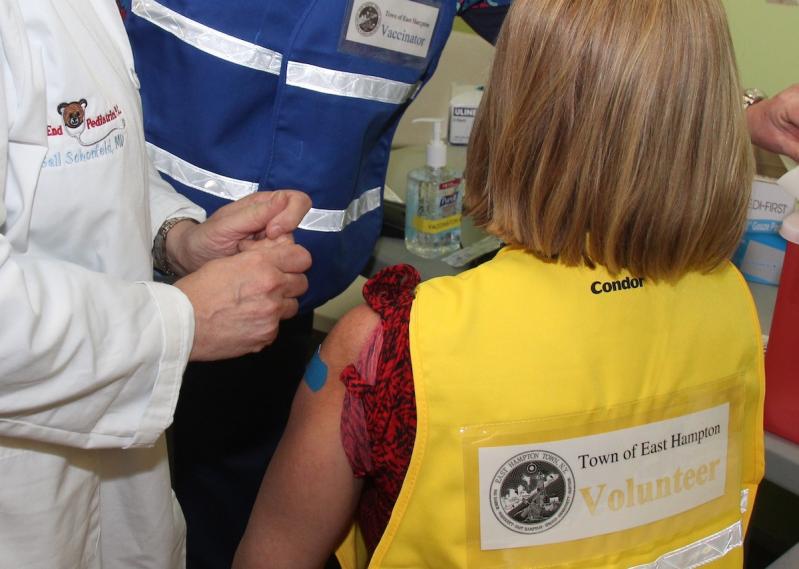 East Hampton Town administered 300 first doses of the Pfizer vaccine to emergency personnel, teachers, and grocery and food store workers on Saturday at a clinic set up at the former Child Development Center of the Hamptons building.
Durell Godfrey
By Carissa Katz

In a relaxing of a strict measure in effect since mid-November as Covid-19 rates began to climb across the state, businesses such as bars, restaurants, and other New York State Liquor Authority licensees can now remain open until 11 p.m., giving them an extra hour to do business.

The change, announced by Gov. Andrew M. Cuomo on Friday and effective Sunday, came as New York's seven-day average positive Covid-19 test rate dropped below 4 percent for the first time since Nov. 29. The average was at 3.9 percent on Friday and 3.8 percent on Saturday. The daily rate of positive test results statewide stood at 3.5 percent from Wednesday through Sunday, however Long Island continued to have the highest rate of any region in the state, with a seven-day average on Saturday of 4.77 percent (4.7 percent in Suffolk; 4.8 percent in Nassau).

The governor also extended the closing times for gyms, casinos, and billiard halls. The earlier closing times had been in effect since Nov. 13, when a 10-person limit on indoor and outdoor gatherings at private residences was also imposed.

"Hospitalizations and the positivity rate continue to decline, and with the holiday surge now in our rear-view mirror, we must keep taking steps to further re-open the economy safely and responsibly," Governor Cuomo said in a statement released on Sunday.

The limit on gatherings remains in effect.

Vaccines are seen as the most critical element in reopening the economy, but even with an increased weekly supply coming from the federal government, the demand continues to outpace supply.

On Sunday, the state began allowing people with a list of specific comorbidities to begin booking vaccine appointments at its mass vaccination sites, bringing the number of New Yorkers now eligible to receive the vaccine to approximately 10 million. Those with cancer, chronic kidney disease, heart conditions, weakened immune systems, pulmonary or liver disorders, severe obesity, diabetes, intellectual and developmental disabilities, and certain neurological conditions are among the newly eligible, as are pregnant women. A full list was released by the governor's office on Feb. 5.

Those who qualify will be required to provide a doctor's letter, medical information, or a signed certification to prove their eligibility.

Offering its own bright spot, East Hampton Town on Saturday opened its own vaccination clinic at the former Child Development Center of the Hamptons Building, with an allocation of 300 doses of the Pfizer vaccine provided by the county. Vaccines were given to teachers, emergency personnel, grocery and small food store workers who had been previously identified by schools, employers, or E.M.S. providers. They will be able to return to the site for their second doses of the vaccine.

"Dr. Gail Schonfeld, an East Hampton pediatrician, served as the medical lead," according to a release from the town, and "Dr. George Dempsey, a member of the planning team, was also on hand." Conor Cassara, the pharmacist who runs Park Place Chemist in East Hampton "oversaw administrative efforts related to the vaccine."

The town had put out the call earlier this month for volunteers to help with a range of tasks integral to the smooth operation of its vaccine distribution effort, which it hopes to expand as supplies increase. "Hundreds of volunteers answered the Town’s call for help," according to Supervisor Peter Van Scoyoc's office, "so many that the town had to suspend taking names -- and several dozen of them, a team of doctors, nurses, E.M.T.s, and community residents, served at the clinic on Saturday. Several local school nurses were on hand, and an East Hampton Village Ambulance Association E.M.T. team and ambulance stood by all day."

"The town will continue seeking opportunities to offer vaccination clinics, particularly in partnerships with pharmacies and doctors who can offer vaccinations to our age 65-and-over residents or other eligible categories," the supervisor's office said, but added that "there is no sign-up or waiting list at this time."