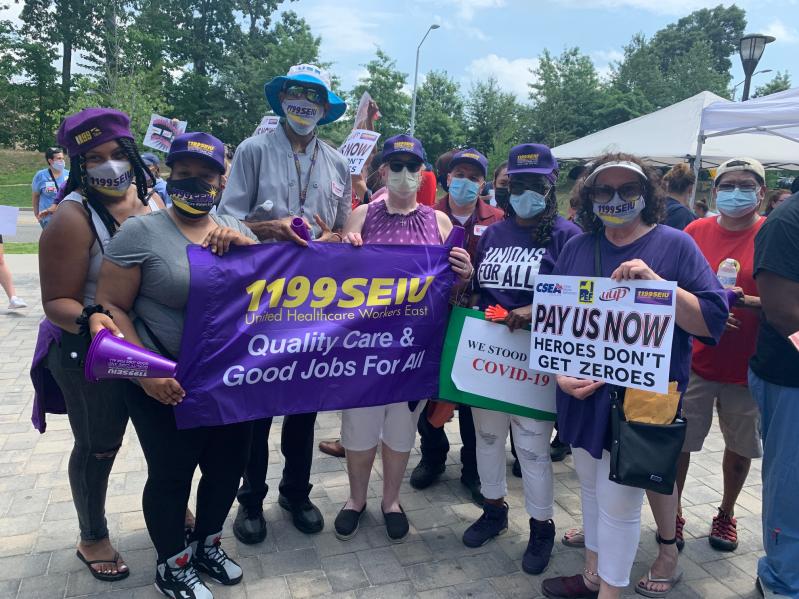 There are seven people living in Katie Ortiz's house in Shirley, ranging from her 6-year-old daughter to her 70-year-old father-in-law. Ms. Ortiz, who works as a nurse at Stony Brook Southampton Hospital, found herself at a difficult crossroads during the height of the Covid-19 pandemic: She could worry about her family or worry about her patients, but she couldn't do both at the same time.

Yet all she did was worry. She would change into fresh clothes on her front porch before going into her house after work. Covered in plastic personal protective equipment for 12 hours each day, she lost 20 pounds in about three months.

"It was very difficult. The stress just didn't seem to end," said Ms. Ortiz, who is a "three-fifths" employee, meaning she normally works four shifts per pay period. She found herself picking up more work, though, without being asked. "When you were at work, it was almost as if there was no time to do anything other than think critically. You weren't thinking of your family at home, you were just thinking of how to help a patient improve. . . . People's families took a backseat because your hospital family came first."

Ms. Ortiz is one of hundreds of nurses and health care employees who are members of the 1199 union that represents Stony Brook University Hospital's facilities in Southampton and also in Greenport, where Eastern Long Island Hospital is located. The union members are still fighting for crisis pay, which they assert would help make them "whole" after they said they sacrificed so much on behalf of the Covid-19 patients, and other patients as well, between mid-March and early June.

However, they feel their plea is "falling on deaf ears," said Valerie O'Neill, a nurse and 1199 union delegate who works at Southampton Hospital. The union picketed on June 23 in Southampton, and did so again outside the main campus in Stony Brook yesterday, joining other bargaining units from the main hospital who have separate grievances related to salary increases.

"It's pretty disheartening," Ms. O'Neill said. "What happens if a second surge comes around? People are going to say, 'Sorry, no, I can't do overtime.' Morale is definitely down. It's definitely put us on difficult terms" with the hospital administration, she said.

"We value the skilled work of every member of our staff," Ms. Howard said by email. "Our primary concern has always been, and continues to be, our employees' safety as they provide the highest quality of care for our patients. We work every day to foster a positive work environment where all employees are valued and respected."

Ms. O'Neill said the hospital had previously offered the 1199 union members an extra week of paid time off, but the offer came with many restrictions. It is unclear whether that offer is still on the table.

Northwell Health, a large, privately owned network of hospitals and health care centers on Long Island, has given $2,500 bonuses to its employees for their work during the pandemic. Governor Cuomo has also urged the federal government to provide additional compensation for front-line workers.

Ms. Howard said the hospital has made several supportive resources available to its front-line employees, including access to the Meeting House Lane Medical Practice mental health professionals, free massages, a formal employee assistance program, support groups, and a program called the Sole Survivor in which staff members can take a walk with a social worker. Ms. Howard said there were also "dedicated areas for quiet, comfort, and rest," and that no staff had been furloughed.

And as far as raises go for the main hospital's nurses and health care workers, as well as many clerical and support staff, an executive order signed by Gov. Andrew M. Cuomo in March froze salaries for all state employees. The Stony Brook hospital system is a state-run public entity, and its employees were due a 2-percent increase on April 1.

"The options are, you could do layoffs of state workers, option A," Governor Cuomo said in a press briefing at the time. "Option B, you could buy some time with freezing the raises to state workers. I choose option B."

Ms. Ortiz acknowledged that her supervisors are wonderful, caring, and flexible, and that the hospital administration is generally doing a good job providing for patients and employees, particularly when it comes to personal protective equipment. However, she said the working environment feels "cold" now.

"I'm already having traumatic stress disorder, and it's not 'post' yet," she said.