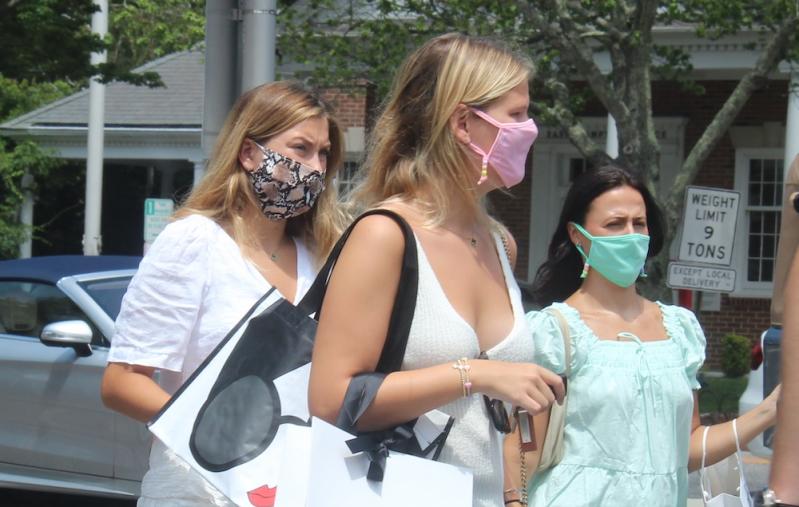 Shoppers in East Hampton Village over the weekend wearing masks as they walked down Newtown Lane.
Durell Godfrey
By Christine Sampson

Long Island's daily Covid-19 infection rate has stayed at approximately 1 percent for a week, and there has been only one death in Suffolk County in the last eight days, according to data released by Gov. Andrew M. Cuomo on Monday.

He has also put additional restrictions in place on bars and restaurants and opened up a rent relief program to all New York State residents.

The statewide average daily infection rate -- gauged as the number of new positive cases compared to the total number of new tests -- was at 1.05 percent on Sunday. Long Island registered at 1 percent on Friday, .9 percent on Saturday, and 1 percent on Sunday. This is in contrast to last Monday, July 13, when the state reported 102 new Covid-19 cases in Suffolk County, and an infection rate of 2.1 percent, sparking fears that Suffolk was, in County Executive Steve Bellone's words, "heading in the wrong direction." The infection rate for Long Island as a whole reached 2 percent last Monday, but it has remained at or below 1 percent since then.

Suffolk had 49 new confirmed cases of Covid-19 on Thursday, 58 on Friday, 26 on Saturday, and 30 on Sunday, bringing its total to 42,496 as of Sunday afternoon, according to the governor's office.

On Thursday, Mr. Bellone said there had been no Covid-19 deaths in the county for five straight days. There was one death in Suffolk over the weekend.

New York City, which entered phase four of the NY Forward reopening plan on Monday, was consistent at 1.3 percent over the last three days.

Hospitalizations are down to 716 across the state, a level not seen since March 18.

Governor Cuomo said Thursday that bars and restaurants "must only serve alcohol to people who are ordering and eating food, and that all service at bar tops must only be for seated patrons who are socially distanced by six feet or separated by physical barriers."

People who are concerned about violations of those rules can report them, along with photographs, at the State Liquor Authority's website, sla.ny.gov. For New York City, the governor has instituted a "three strikes and you're closed" policy for establishments that flout the rules.