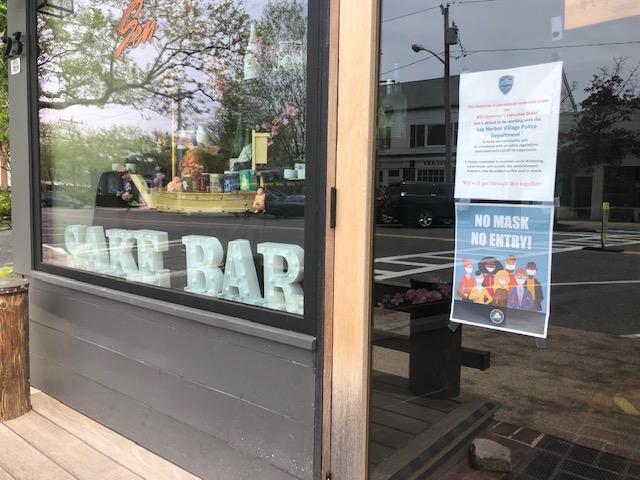 Several key initiatives were announced by local, county, and state officials on Thursday, paving the way for restaurants to offer increased outdoor dining and for private business owners to officially refuse service to people not wearing masks.

Suffolk County Executive Steve Bellone said the Department of Health Services would give automatic approval to restaurants that are expanding outdoor dining logistics. He said as long as those plans are approved by town or village municipalities, the Health Department would sign off on them. Normally, there is a lengthy application and review process a restaurant must go through with the department, which enforces the sanitary code and other aspects of restaurant operations.

"There will not be an impediment here in the county . . . as you move into areas for outdoor dining that you are currently not permitted for," Mr. Bellone said. "We're hopeful that this is one of the activities we could see accelerated moving forward."

The seasonal nature of many restaurants was a factor in the decision, he said.

Gov. Andrew M. Cuomo signed an executive order giving business owners the right to mandate mask-wearing in their establishments. Now, those signs already widely seen on businesses' front doors — "no mask, no service" — will have government authority behind them.

Masks "are deceptively effective, amazingly effective," Governor Cuomo said Thursday morning. "We've made them mandatory in public settings — public transportation, et cetera — but we're talking about reopening stores and places of business. We're giving store owners the right to say, 'If you're not wearing a mask, you can't come in.' That store owner has a right to protect themselves . . . and the other patrons in the store."

The comedian Chris Rock and the actress Rosie Perez joined Governor Cuomo in New York City on Thursday to echo the messages about masks, social distancing, and testing to the Borough of Brooklyn, which has multiple hot spots of Covid-19.

"They want a full-fledged Brooklyn voice if they're going to listen to a Brooklyn voice of authority," the governor said, "so I'm going to bring in reinforcements to help communicate that message."

Also Thursday, Southampton Town Supervisor Jay Schneiderman announced the creation of a Town Litter Crew to pick up trash at parks, beaches, and road sides. The jobs will pay $17 an hour and are full time for the next two months. Mr. Schneiderman said in a news release he hopes to employ some people who have lost their livelihoods during the Covid-19 pandemic. Those who are interested in applying can call the town’s human resources division at 631-287-5715.

"It's hard not to notice [litter]. It's everywhere," Mr. Schneiderman said.

Mr. Bellone said the county had reached 39,359 confirmed cases of Covid-19, plus another 12,956 cases that were detected through antibody tests rather than diagnostic tests.

There were 301 people in the hospitals, 92 of them in intensive care units, representing slight decreases from Wednesday. There were 10 more deaths, bringing the total fatalities to 1,871.

New Dog Agility Park, Community Garden Sale in Montauk
HarborFest Is Canceled
Few Fireworks on South Fork This Year
Easing Stress on the Environment, One Flush at a Time
END_OF_DOCUMENT_TOKEN_TO_BE_REPLACED