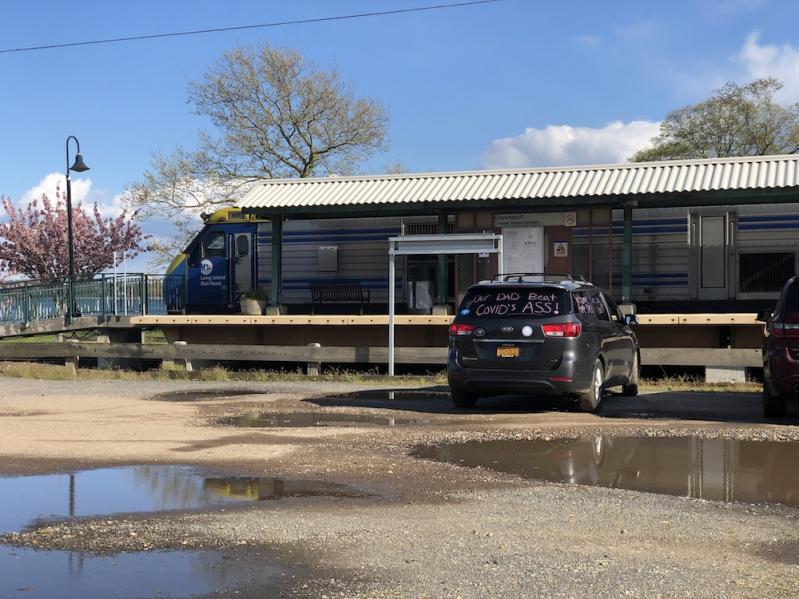 "Our dad beat Covid's ass!" read a message on the window of a minivan waiting at the Greenport train station on Saturday. As Suffolk County looks toward reopening, one of the metrics used to determine whether it is safe to do so is whether the county sees a three-day rolling average of fewer than two new Covid-19 hospitalizations per 100,000 residents.
Carissa Katz
By Christine Sampson

Two measures of Long Island’s progress toward reopening the economy appear to be at odds — Nassau County is checking off five of the state’s seven reopening criteria, while Suffolk County is saying four have been met — but one thing is for certain at this point: When Gov. Andrew M. Cuomo’s Pause order expires tomorrow, Long Island will not be ready to fully reopen despite what is thought to be the waning impact of Covid-19 in New York State.

The state’s own measures of the “metrics,” as those seven criteria are called, also show Long Island has already met five, including an “expected” mark in the category for contact tracing. But to a large extent, and particularly in Suffolk County, elective surgeries have not yet been re-established in hospitals, which could play a part in meeting the metric requiring that at least 30 percent of hospital beds be consistently available. Suffolk is including that metric in the four it has already met.

Suffolk County Executive Steve Bellone said this week he was confident that the county meets the hospital capacity requirement nonetheless.

“Hospitalizations continue to decline almost every day. . . . . My belief is the hospital capacity issue is not going to be the obstacle to moving into phase one,” he said on Tuesday. “New hospitalizations — that is a critical metric, and the hospital deaths as well.”

Beyond contact tracing, which is covered in the article below in today’s Star, and the minimum of having 30 percent of hospital beds and intensive care units available, the reopening metrics include having a testing capacity of 30 tests per 1,000 residents per month, a 14-day decline in both the rolling average of currently hospitalized Covid-19 patients and hospital deaths, and no more than two new hospitalizations per 100,000 residents each day.

As of yesterday morning, Suffolk was still averaging 2.02 new hospitalizations per 100,000 residents, and was also missing the mark on hospital deaths and contact tracing.

By yesterday morning, Suffolk had surpassed 41,500 confirmed positive cases of Covid-19, with 265 in East Hampton and 916 in Southampton. That number included more than 3,000 cases that were detected in post-infection antibody tests. As of Tuesday there had been 1,639 Covid-19-related deaths in the county. Due to technical difficulties the most recent count on hospitalizations was from Sunday, Mr. Bellone said, and was at 575 — the lowest the county had seen since the end of March.

Governor Cuomo has established “control rooms” to monitor each region’s progress, with Mr. Bellone, Nassau County Executive Laura Curran, and Long Island business leaders in that group for our region.

Mr. Bellone said Tuesday that even within Suffolk, there could be differences in reopening plans.

“Suffolk County is an incredibly diverse place, a very large place,” he said. “We can expect there will be variations and differences among the different municipalities. The good news is everyone is speaking and communicating about it. To the extent you see variations there, it will have been after extensive discussion about whether that makes sense or not.”

How soon is too soon for East Hampton?

“That’s a really interesting question,” East Hampton Town Supervisor Peter Van Scoyoc said Tuesday. “I think that locally there is probably relaxation of some industries and jobs warranted, but are we ready for summer as normal? No.”

Governor Cuomo has cautioned against allowing “attractive nuisances” to reopen. An argument could be made that the East End has many such attractions, and indeed, Mr. Bellone on Tuesday acknowledged that many amenities, such as beaches and public pools, are operated by individual towns.

“Public health has to be our number-one priority,” Mr. Van Scoyoc said. “You can’t have economic prosperity without protecting public health. Short-term gains are not worth the long-term potential negatives. . . . I know there’s a lot of pent-up energy to get back to normal, but we have to proceed with caution. Anywhere economies have opened back up, there’s a pretty quick resurgence” of the virus.

Already there are hotels in Montauk advertising “safe respite,” Mr. Van Scoyoc said. “The governor has given examples of a phased reopening. It would be good to be able to fine-tune that here for East Hampton. . . . Most of our hotels are really resort hotels, which is contradictory to what the governor has said about not opening [places] that would attract travel from other regions. I don’t think that generally the community really supports that yet and is comfortable with the concept of encouraging tourism. We hope to get there at some point, but I don’t think prior to Memorial Day we are ready for that.”

The state is allowing landscaping and gardening, along with “low-risk businesses,” to open as of tomorrow. Retail businesses, with a curbside service caveat, are in the first phase of reopening, along with construction, agriculture, wholesale trades, and fishing operations. Retail as usual, along with real estate and professional services, are in phase two. Restaurants are in phase three, and arts, entertainment, recreation, and education are in phase four.

By his best guess, Mark Smith, an owner of the Honest Man Restaurant Group, predicts dine-in restaurants here will begin operating again around June 15 most likely with a limit of 50 percent of their normal capacity. He hopes the towns and villages will relax restrictions on outdoor dining to make up for the loss of tables inside. “I think we’re very eager,” he said yesterday. “We didn’t get into the restaurant business per se to do takeout. Takeout is a part of what we did in serving the public, but it was a very small percentage of our business. We’re very much looking forward to doing what we do best.”

The issues resort towns are facing are not unique to East Hampton. In Cape Cod, Mass., WBUR, a radio station there, reported last week that officials are seriously debating how to keep “residents and visitors safe while making the most of a ‘muted’ season.” WBUR says the messaging to visitors is this: “Many of the amenities you are used to enjoying in our communities are closed during this time.”