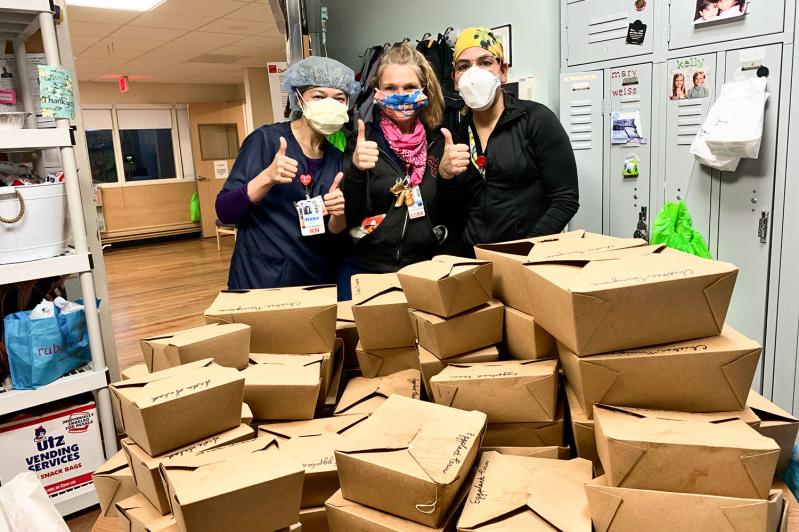 Necessity, the saying goes, is the mother of invention, and the twin needs of keeping front-line medical professionals fed and restaurants solvent during the twin crises of a public health emergency and near-total shutdown of commercial activity were joined this year on Shelter Island.

Brett Surerus, a property manager who leads several nonprofit initiatives, and Alex Graham, a marketing adviser at Compass, lead the Shelter Island Action Alliance, which was quickly established in March to simultaneously feed those critical health care workers and support the island's restaurants.

The idea was born when Mr. Surerus's wife, Kelly, a nurse at Stony Brook Southampton Hospital, spoke of a typical 13-hour shift during which she was unable to leave her unit because of safety protocols. "I said, 'I have a way to help restaurants and feed my wife,' " Mr. Surerus remembered. The donor-funded alliance has raised more than $80,000 and delivered more than 6,000 meals to health care workers at Stony Brook Southampton and Eastern Long Island Hospital in Greenport, he said.

"In the beginning, we had five restaurants -- that's all that were open in March," Mr. Surerus said. "We tried to fold in any open restaurant with at least one order." The makeshift network links restaurants with volunteers, the latter of whom deliver the goods to recipients.

The result is more than nourishment for the most heroic of 2020's superstars -- those on the front lines of the pandemic -- because the restaurants are going above and beyond as well. Vine Street Cafe provides delicacies like duck, tuna tartare tacos, and handmade pasta, Mr. Surerus said. "At the height of the pandemic, we were delivering 100 breakfast burritos from Stars Cafe. They have such a great variety of burritos -- they turned out to be one of hospital's favorite things. You can tell the restaurant owners put love into this." Firefighters were treated to pizza from Shelter Island Slice, he added.

The island's summer residents were generous, Mr. Surerus said, and the Shelter Island Lions Club has helped with accepting and allocating donations. The program gives restaurants a boost and feeds locals -- a win-win, he said. "It's been fun, it's been wild, and it's been fulfilling."