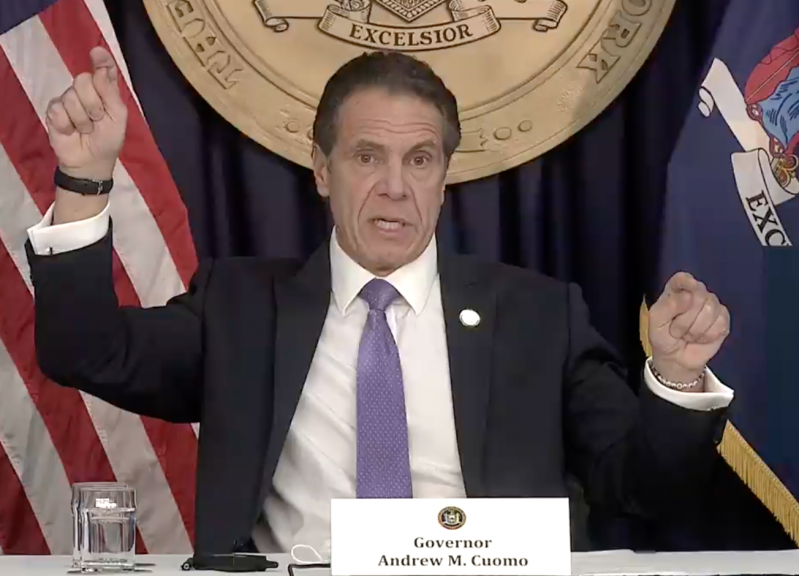 Gov. Andrew M. Cuomo during a press conference on Monday.
By Christine Sampson

Gov. Andrew M. Cuomo has instituted limitations on restaurants, houses of worship, and schools in Riverhead and Hampton Bays, the two East End communities that crossed a line on Monday into higher Covid-19 infection rates.

Houses of worship in those two places are limited to 50 percent capacity, and restaurants must limit customers to four or fewer per table. Schools there are still open but are now required to test, at random, 20 percent of the students and staff over a two-week period. Businesses are still able to stay open.

During a press conference on Monday, the governor showed a slide indicating that the seven-day average infection rate in East Hampton is 4.41 percent, suggesting communities here are in danger of crossing the same line soon.

Statewide on Monday, the Covid-19 infection rate was 2.74 percent with the micro-cluster communities included, and 2.29 percent with those areas excluded. There were 30 deaths reported in the last 24 hours.

Hospitalizations in New York reached 2,562, an increase of 119 cases. State projections show that statistic will likely cross 6,000 within the next three weeks, after already expanding to that point by 122 percent over the last three weeks.

Governor Cuomo said that heading into a holiday season usually characterized by increased social activity, “we are in a place now where there is a bad synergy.”

“There is a sense of Covid fatigue,” he said. “We’re social beings, we enjoy other beings. Isolation is depressing. Covid fatigue -- ‘I don’t want to do this anymore,’ ‘There’s a vaccine, it’s over’ -- you put that together with the fact that the cases are already on the increase and we are now coming into the high social season. . . . That is a bad combination, and it is always the combination of events that creates the major issues. This is a toxic cocktail of dynamics and facts.”

He referenced schools as one of the safest places for children to be during the pandemic, in particular kindergarten through eighth grade. High schools and junior high schools are where infection rates start to rise, he said.