Amid the spread of COVID-19, attempted murder trial will press on until a verdict is reached 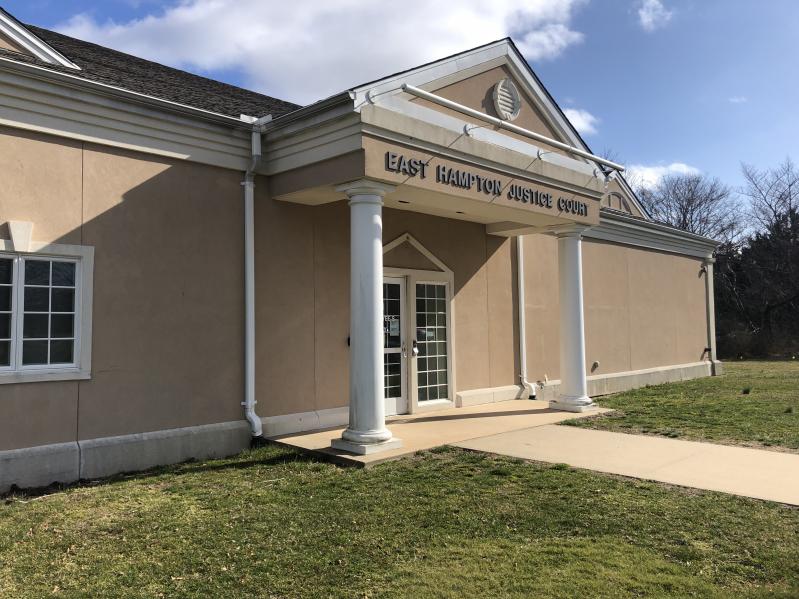 The East Hampton Town Justice Court is one of many courthouses in New York, closed until further notice.
Christine Sampson
By Taylor K. Vecsey

Courthouses throughout Suffolk County, including East Hampton Town and Sag Harbor Village Justice Courts, are closing amid the spread of COVID-19, but the case against Patchita Tennant, a former East Hampton CVS manager accused of trying to murder her boyfriend, will press on. It is one of three trials in Suffolk,  two criminal and one civil case, that will continue until completed, though they are being moved to a single location, the Cohalen Court Complex in Central Islip.

On Monday, Judge John B. Collins explained the decision, made by the New York State Office of Court Administration, to the 15 jurors hearing Ms. Tennant's case in his Riverhead courtroom.

"Thank you for your perseverance," he said to the jury, as he assured them that the court building had been disinfected over the weekend. They were the best 15 jurors (12, plus 3 alternates) he’d ever worked with in his 39 years on the bench, he said. He had pizza delivered to the courthouse at lunch, at his expense, so they did not have to leave the building.

"We will be as expedient as humanly possible," Judge Collins said of the day's testimony, which included four witnesses, two forensic scientists and two detectives.

The Cromarty Court Complex in Riverhead closed after testimony wrapped up on Monday evening around 6. East Hampton Town Justice Court and the Sag Harbor Village Justice Court facilities closed on Monday at 3 until further notice. All cases have been adjourned, according to a release from Justices Lisa R. Rana and Steven Tekulsky. Defendants will be notified of their next court date.

An announcement from Lawrence K. Marks, Chief Administrative Judge of the New York State court system, posted online, said that effective 5 p.m. on Monday, all nonessential court functions have been postponed until further notice. No new criminal or civil trials will begin and no prospective jurors will be convened.

Arraignments and other applications that need to be immediately heard, such as those involving orders of protection, will be held in Central Islip, even for those charged on the South Fork. Justice Rana said, however, that cases requiring after-hours or weekend arraignments will  be heard in East Hampton and Sag Harbor.

Also as of Monday, all eviction proceedings and pending eviction orders have been suspended. Family Court will hear only "essential matters," such as issues related to child protection proceedings, juvenile delinquency, and support orders.

"These initiatives are part of our continuing and evolving effort to assure the operation of the courts in the safest possible manner for the public and our employees in this time of medical emergency," Judge Marks said.

All further notices will be posted on the New York court system's website at nycourts.gov, or by calling 800-268-7869.