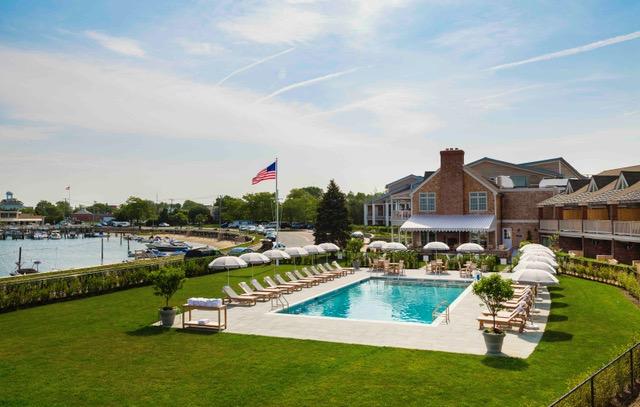 The pool at Baron's Cove hotel in Sag Harbor, which will delay its opening this year until June.
Baron's Cove
By Jamie Bufalino

While the Covid-19 pandemic has brought business at East End hotels to a virtual standstill, several owners said this week that they are expecting an influx of guests this summer and will retool operations to accommodate them safely.

“We need to be ready with a plan that comports with the new normal,” said Curtis Bashaw, the founder and managing partner of Cape Resorts, which owns Baron’s Cove in Sag Harbor as well as several hotels in Cape May, N.J.

All Cape Resorts properties are temporarily closed due to the pandemic, and the company has had to furlough 450 employees. During the hiatus, Mr. Bashaw and his team have been strategizing how to reopen in a way that will make people who have been social distancing for several months feel most at ease.

At Baron’s Cove, that will mean waiting until after Memorial Day weekend to avoid an initial wave of visitors. “We’re planning a phased re-opening in early June,” Mr. Bashaw said.

There will be more space between lounge chairs at the pool and fewer tables in the indoor lounge. Gym equipment will be moved outdoors, and the restaurant, which has traditionally been open to the public, will be reserved for guests. Also, the hotel will accept fewer bookings. “We don’t feel the need to operate at 100 percent,” Mr. Bashaw said. “We want to give people the space they need.”

Each guest room at Baron’s Cove can be accessed without having to pass through a common area, he noted, adding that the cleaning staff will use a state-of-the-art ozone machine to filter the air in between stays. “Cleanliness is not only next to godliness, it’s a core competency for us,” Mr. Bashaw said. Guests will be offered bottles of hand sanitizer and disinfecting wipes at check-in. The hotel will monitor the health of its staff continually, he said. They will be issued face masks — “hopefully, cute” — that may double as name tags.

Gurney’s Resort in Montauk, which has been closed since the start of the pandemic, plans to reopen on May 15, with social distancing measures in place and “a detailed hygiene protocol throughout the resort,” said George Filopoulos, the owner. “We will also be offering new amenities such as in-room programming like streaming workouts, do-it-yourself cocktail deliveries, more robust room service menus, and we’ll spread out outdoor seating.” The hotel’s sister property, Gurney’s Star Island Resort and Marina, will reopen on May 22.

Mr. Filopoulos expects Montauk to be a popular destination for travelers after the call to shelter in place is lifted, particularly among New York City residents who can drive there and will likely not want to travel internationally. “Montauk will be viewed as a safe escape,” he said.

To support the Covid-19 relief efforts and to attract bookings, Gurney’s is offering a gift card promotion. For every gift card sold, the hotel will donate 25 percent of the purchase to the Food Bank for New York City.

Both Baron’s and Gurney’s have eliminated booking restrictions and penalties for cancellations. “Our properties are more flexible than ever before,” said Mr. Filopoulos, “as we want our guests to have the opportunity to make adjustments.”

May 1 was supposed to be the day the old Gansett Green hotel in Amagansett, which is under new ownership, made its post-renovation debut as The Roundtree. Due to the pandemic, the hotel will now officially open on June 1, said Boby Haryadi, the general manager.

“I’m optimistic about the market. In fact, I’ve already received a few bookings for July and August,” he said this week. “Look at it this way, everybody’s stuck in their houses, so we’re pretty sure everybody needs to get out, especially moms and New Yorkers in their small apartments.”

Sybille van Kempen, the owner of the Bridgehampton Inn, agreed. “Everybody has a reward in mind already,” she said, and a vacation on the East End will be the perfect escape for those sick of being indoors. “All you have to do is walk outside to see what a great place it is to be,” Ms. van Kempen said.

East Hampton Samples Are a Crucial Contributor to Lyme Test
Ready to Adopt a Pet? ARF Is Ready, Too
Guild Hall's Curator Visiting Studios Virtually Through June
Seeking Stories and Images From the Time of Covid
END_OF_DOCUMENT_TOKEN_TO_BE_REPLACED