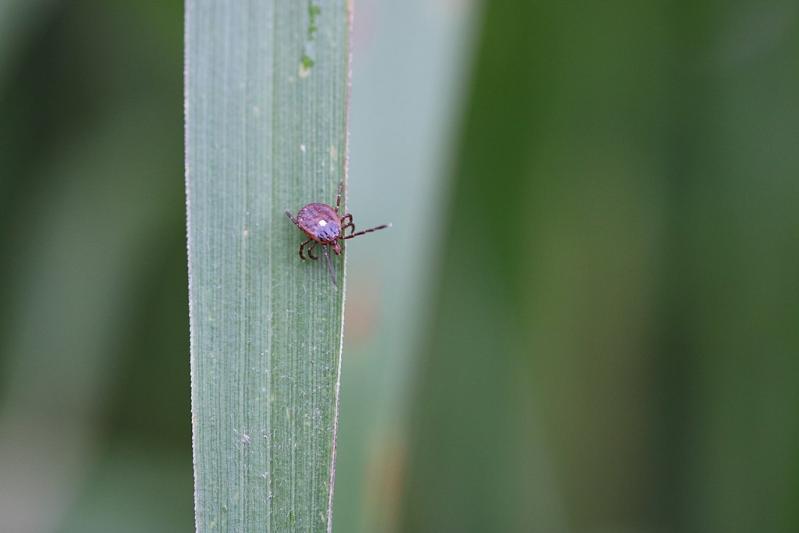 A lone star tick, which can be a carrier of human ehrlichiosis and other infections, can be found in the eastern and southern U.S.
National Institute of Allergy and Infectious Diseases
By Joshua Potter, D.O.

It is that time of year again here on the East End of Long Island, when the phones in doctors' offices start to ring seemingly constantly with patients calling with questions about tick bites. As just about everyone knows, we have an overabundance of ticks in this region, and the prevalence of tick-borne diseases, including Lyme disease, erlichiosis, babesiosis, and anaplasmosis is relatively high.

The first, best step is of course prevention and active vigilance. I advise patients that if they are going to be outside in the grass or woods for any significant period of time, they should consider tucking long pants into their socks, using insect or tick repellent, and of course checking themselves and having a partner or parent check the areas they cannot see for any ticks.

The risk of Lyme disease itself is very low if the tick is on for less than 36 hours because of how the parasite that causes Lyme must be exchanged during a blood meal, so checking regularly for ticks and removing any that are found is vital, especially as there are some rare micro-organisms such as the Powassan virus that can be transmitted in a much shorter time.

If you do notice a tick, remove it promptly, and do not wait until you get home or to go to the doctor to do so. Use tweezers to firmly grasp just behind the head as close as possible and slowly pull it out. Try to avoid squeezing the body itself as sometimes this can cause the contents of the stomach (which is where the bacteria typically are) to be injected. Once the tick is removed, you should wash the site and keep it clean and dry. Monitor for signs of local infection such as worsening redness, swelling, or pus, but understand that some local redness and irritation are common with all tick and insect bites.

If you do find a tick and aren't certain how long it has been there, or if there is a chance the tick has been present for a few days (it will look fat and engorged with blood), you should call your doctor to discuss it. For someone living in a region endemic with Lyme disease, like ours, the Infectious Disease Society of America recommends that if you have a tick that has been present for more than 36 hours either by estimation of exposure or degree of engorgement, and the tick is an Ixodes scapularis (commonly known as a deer tick) which is the tick that carries the bacterium Borrelia burgdorferi that causes Lyme disease, then you can be treated prophylactically with a single one-time dose of doxycycline to lower the risk of Lyme disease, provided this can be done within 72 hours of the tick being removed.

There are several important caveats to this approach.

First, this does not completely eliminate the risk of Lyme disease. It is still possible in a minority of patients to progress to Lyme, so it remains important to be vigilant against signs of tick-borne illness. Generally, these include severe fatigue, swollen joints, fevers, chills, and sometimes gastrointestinal upset including nausea and vomiting, as well as the well-known erythema migrans or "bull's-eye" rash. This rash starts as redness, often, but not always, at the bite site, that slowly spreads to become larger. Often, there is a central clearing that occurs to give the rash a bull's-eye appearance, but, again, not always. If any of these symptoms occur, most particularly the bull's-eye rash, which itself is virtually diagnostic of Lyme even without other signs or remembering a tick bite, you should definitely talk to your doctor about further testing and/or treatment.

Second, antibiotic prophylaxis is indicated only to help lower the risk of Lyme disease. There are now no recommendations for prophylaxis to help lower the risk of any of the other tick-borne diseases that we see on the East End, such as babesiosis or anaplasmosis. These illnesses often have similar systemic manifestations as those described above, so vigilance is again key.

Last, there was once some concern regarding the use of doxycycline in children, as the class of antibiotics it is a part of, tetracyclines, could cause dental staining in the pediatric population. However, this was common with older tetracyclines and not the newer generation including doxycycline, and in studies where doxycycline has been used in children, it appears to be safe, especially with short courses such as those used for prophylaxis.

Most important, if you have any questions or concerns about any of this information, you should discuss it with your own physician or your child's family physician or pediatrician. There are also several fantastic resources available online, including the Regional Tick-Borne Resource Center at Stony Brook Southampton Hospital (eastendtickresource.org), which you can call at 631-726-TICK with questions, as well as the Tick Encounter website maintained by the University of Rhode Island, which has helpful information including pictures of various tick species so that you can identify what you have removed (web.uri.edu/tickencounter). Identification is particularly important, for example, as lone-star ticks are not as worrisome for Lyme disease but can cause other issues such as the alpha-gal allergy.

As always, stay safe. The East End offers extraordinary opportunities for enjoying the outdoors in terms of beaches, preserves, and trails, and it is to be hoped that following some of the suggestions outlined here will help give you the chance to enjoy them to their fullest.
--
Joshua Potter, D.O., a physician with Stony Brook Southampton Hospital's Meeting House Lane Medical Practice, oversees the practice's Shelter Island office. He specializes in family and neuromusculoskeletal medicine. Opinions expressed in this column are his personal and professional views and not necessarily those of his employer.