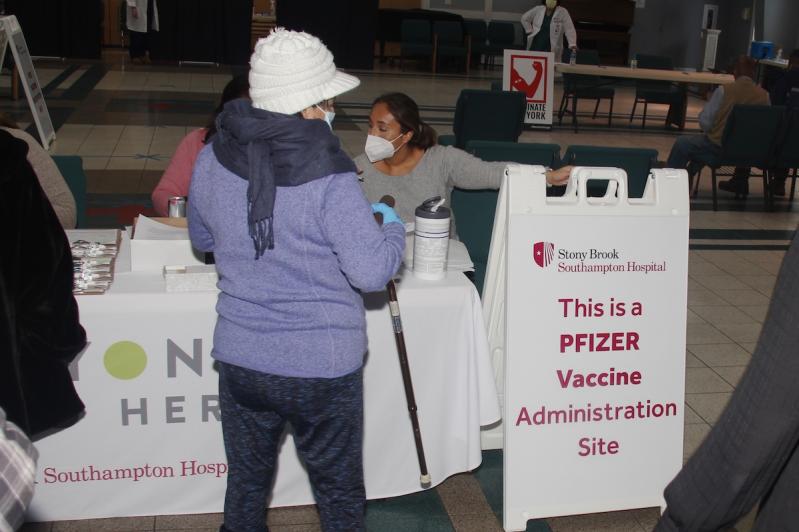 The Pfizer vaccine was administered at a pop-up site set up by Organizacion Latino-Americana of Eastern Long Island in partnership with New York State.
Durell Godfrey
By Christine Sampson

On Tuesday, Suffolk County Executive Steve Bellone pledged to work with local municipalities and nonprofit organizations on the East End to get Covid-19 vaccines to a region that is widely considered underserved.

Right now, the closest county-run vaccination site to the East End is in Riverhead on the campus of Suffolk Community College, mirroring those on the college's other two campuses in Brentwood and Selden. The closest state-run vaccination site is at Stony Brook University, more than 50 miles from East Hampton Village.

Vaccines administered at the former Child Development Center of the Hamptons school and at Most Holy Trinity Catholic Church were, so far, single-day targeted events that were coordinated by East Hampton Town officials and the nonprofit Organizacion Latino-Americana of Eastern Long Island, respectively. More than 500 people received their first doses thanks to those two efforts.

During a video conference with reporters, Mr. Bellone said the opportunity for vaccinations east of Riverhead "does depend on supply. The supply is critical."

"Certainly, we are looking forward to having additional partnerships like that," he said. "Our efforts are continuing. . . . I understand very well how big Suffolk County is and the challenges that can pose for people, and we are working to address that."

Local folks have taken to social media and newspaper letter-writing to air their frustrations with the lack of access to vaccines.

"There are so little vaccines out this way. It’s easier to get an audience with the Pope than to get an appointment," Ed McAniff of Bridgehampton and New York City said on Twitter on Tuesday, shortly before he was able to finally make an appointment for himself, though not on the East End.

On Tuesday, New York State reported that there were 554 new cases of Covid-19 diagnosed on Monday in Suffolk, representing 5.3 percent of the tests administered. On a seven-day rolling average, Suffolk's positivity rate was 4.3 percent, one of the highest averages in the state.

Overall, the Covid numbers have been trending downward, Mr. Bellone said. Hospital and intensive care unit bed availability continues to improve after dropping to very low levels at the height of the last surge.

"Little by little, we're making progress in our fight against Covid-19," he said. The numbers "are getting better with each passing week. . . . Our job now is to keep this progress going."