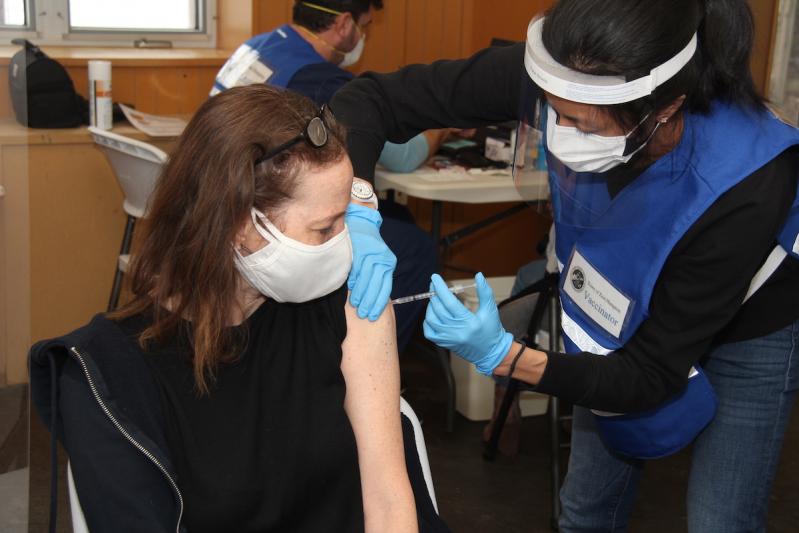 Soozie Miller was one of 332 people to get a first shot of the Pfizer vaccine at East Hampton Town's clinic on Saturday.
Durell Godfrey
By Jamie Bufalino

In an initial effort to oversee local Covid-19 vaccinations, East Hampton Town opened a vaccination clinic at the former Child Development Center of the Hamptons Building on Saturday and provided shots to 332 residents, including first responders, teachers, and people who work in food and grocery stores.

The town had begun readying the C.D.C.H. building to serve as a vaccination hub in January. "It became clear to me that the best opportunity for getting vaccinations in East Hampton was to build out a POD [point of distribution] site to demonstrate that we were capable of receiving vaccines, and being able to administer them," East Hampton Town Supervisor Peter Van Scoyoc said on Friday, while offering a tour of the site.

In another boost in the drive to bring the vaccine to East Enders, Gov. Andrew M. Cuomo's office announced yesterday that the state will open a pop-up vaccination site at Most Holy Trinity Catholic Church in East Hampton tomorrow from 10 a.m. to 2 p.m. It is one of 13 new community sites coming online across the state this week in an effort to address equity in vaccine distribution. Organizacion Latino-Americana has worked with the state to identify 250 eligible recipients in the Black, Latino, and Asian communities. All doses have been spoken for, but those with questions can text 844-795-0043 with their name and eligibility information. The site will be established again in three weeks to provide second doses to people who receive their first dose there.

As for the East Hampton Town's own effort, Suffolk County, which receives an allotment of vaccines from New York State, agreed early last week to provide the town with 300 doses of the Pfizer vaccine. On Friday, Mr. Van Scoyoc traveled to Riverhead with a police escort to pick them up. Because the Pfizer vaccine vials can often yield more doses than the standard five, 32 doses more than expected had been administered on Saturday, Joanne Pilgrim, the executive assistant to Mr. Van Scoyoc, said on Tuesday.

The town had asked fire departments, school districts, and the grocery and food stores to provide a list of staff who had yet to be vaccinated, and to give priority to those who are most at-risk either because of their age or underlying health issues, Mr. Van Scoyoc said. Those who volunteered at the clinic and had yet to be vaccinated were given shots before tending to others.

Rand Stoll, a member of the Amagansett Fire Department who was first in line, said he had been waiting patiently for an opportunity to get vaccinated, but was eager to emerge from quarantine. "I haven't been effective for the department at all, I've been hibernating, and I'd like to be active again while at the same time taking care of my health and my family's health," he said.

Speedy Downs, 80, a safety officer at the Springs Fire Department, had recently missed out on getting vaccinated at a site in Brentwood because he hadn't been notified until the day after his appointment. The Springs chief put him on the list to receive a shot at the town's clinic, he said.

Joshua Brussell, a science teacher at East Hampton High School, had secured a vaccine appointment for March 31 at a state-run site in Stony Brook, but when the opportunity to get vaccinated sooner and closer to home arose, he jumped at the chance. "I got a call in class yesterday from the district secretary, and she said, 'Hey, can you get a vaccine tomorrow?' and I said, 'Absolutely,' " he said on Saturday. "I'm a Type 1 diabetic, and the school said, 'You're a priority for us,' so it's really cool that they did that."

Everyone who received a vaccine on Saturday will also receive a second dose at the town site, according to a statement released by the town.

Dr. Gail Schonfeld, an East Hampton pediatrician, served as the medical lead for the clinic's first day, and Dr. George Dempsey, who helped organize the effort, and Conor Cassara, the pharmacist who runs Park Place Chemist in East Hampton, were also on hand, according to the town.

The town had put out a call earlier this month for volunteers to help at the clinic, and "hundreds of volunteers answered the town's call for help," according to Mr. Van Scoyoc's office. On Saturday, those without medical skills helped direct traffic, while doctors, registered nurses, and emergency medical technicians, all of whom had been certified to administer vaccines, provided the shots. "Several local school nurses were on hand, and an East Hampton Village Ambulance Association E.M.T. team and ambulance stood by all day," the town said. Mr. Van Scoyoc and Councilman David Lys also helped manage the distribution process that day.

"The town will continue seeking opportunities to offer vaccination clinics, particularly in partnerships with pharmacies and doctors who can offer vaccinations to our age 65-and-over residents or other eligible categories," the supervisor's office said, but added that "there is no sign-up or waiting list at this time."

Earlier this month, the state expanded the list of those eligible for a vaccine to include people with specific co-morbidities, bringing the number of New Yorkers now eligible to receive the vaccine to approximately 10 million. Those with cancer, chronic kidney disease, heart conditions, weakened immune systems, pulmonary or liver disorders, severe obesity, diabetes, intellectual and developmental disabilities, and certain neurological conditions are among the newly eligible, as are pregnant women. Those who qualify are required to provide a doctor's letter, medical information, or a signed certification to prove their eligibility.

The United States Department of Health and Human Services announced last Thursday that the federal government had purchased an additional 100 million doses of the Pfizer and Moderna vaccines, bringing the overall number to 600 million doses. Both companies will deliver 300 million doses in regular increments through the end of July 2021, according to a statement issued by the department.

As of now, the state vaccine allotment from the federal government remains at 300,000 doses per week, Governor Cuomo said at a news conference on Monday. But on Tuesday, the White House announced that weekly vaccine allocations to states would increase, and that, according to The New York Times "a new federal pharmacy program would provide two million weekly doses, a doubling of its initial supply." Those doses go directly to retail pharmacies and in turn to "as many as 40,000 drugstores and grocery stores," according to The Times.

As more vaccine doses become available, Mr. Van Scoyoc said he hopes "the town itself can become the entity that receives and distributes the vaccine directly from the state. We're hoping we can build on this opportunity, and do vaccinations on a regular basis."