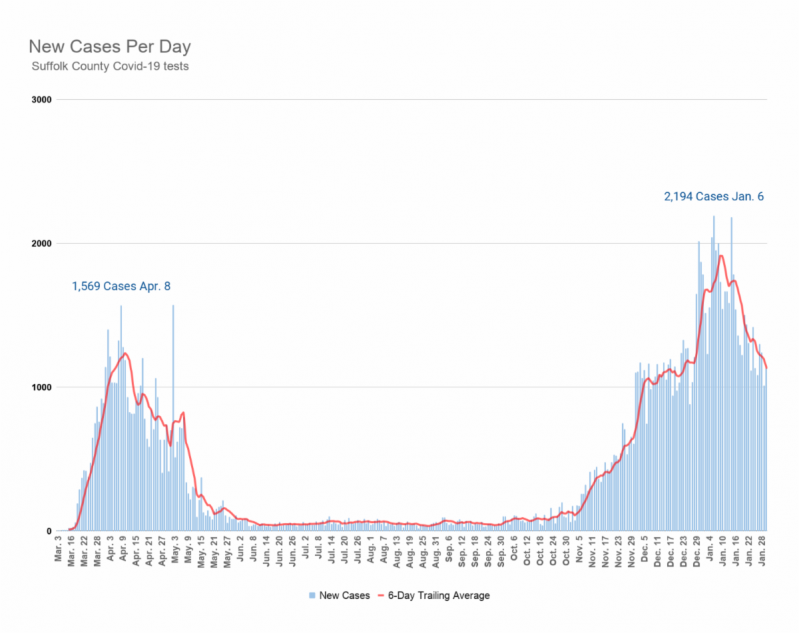 Data released Monday by New York State shows the seven-day average rate of positive Covid-19 cases in Suffolk County has been ticking downward now for nearly a month. The rate reflects the number of cases that are positive as a percentage of the total tests administered.

Since Jan. 7, when the seven-day average positivity rate was 10.7 percent, there has been a slight decline nearly every day, sometimes just by one-tenth of a percentage point. On Monday, the state reported Suffolk’s seven-day average was down to 6.7 percent.

There appear to have been fewer tests logged overall during the last several days, which may have affected the numbers. Indeed, the state said in its daily press release that “data, including test results and hospital rates, reported early in the week are often not completely reflective of the current situation due to lower discharges and testing volume over the weekend.”

On Monday, the state reported 839 new cases of Covid-19 in Suffolk, which represents test results that came in on Sunday. However, Suffolk County’s own data tracker differed on Monday afternoon, showing 913 new cases. Both those numbers represent lower recent case counts compared to earlier this month; as recently as Jan. 14, the state reported more than 2,000 new cases in the county.

The county’s case tracker indicates East Hampton Town has had 1,296 cases of the virus since the onset of the pandemic in March of 2020. Southampton has recorded 4,281, Riverhead 2,672, and Southold 1,289. Shelter Island has had 41. The state reported 1,405 patients hospitalized with Covid-19 in the county as of Sunday, with 10 deaths that day attributed to the virus.

Efforts to get all New Yorkers vaccinated are expanding, though many facilities were closed Monday due to the weather.

"We're locked in a footrace between the spread of Covid and the vaccine's quick distribution, and New Yorkers should stay vigilant as we work to get more shots in arms,” Gov. Andrew M. Cuomo said Monday. “We have a robust distribution network at the ready, but we need more doses to kick our vaccination effort into overdrive and reach more New Yorkers.”

“We have all seen enough of the New York State Vaccination Program to realize that it is failing. The Titanic had a better rollout,” Mr. Thiele said. “While it is true that vaccination distribution has been hamstrung across the nation by the lack of supply, that is not an excuse for the distribution problems for the vaccine we actually have. Even though officials had months to plan for the distribution of the vaccine, it appears that decisions are being made up as we go along. Expanding eligibility in the face of low supply has created a public expectation that could not realistically be met. The frustration and anger are palpable and justified.”

Celebrate Hanukkah All Across Town and at Home
Stuffed With Turkey? Walk It Off
Blood Drive Tuesday in Bridgehampton
END_OF_DOCUMENT_TOKEN_TO_BE_REPLACED