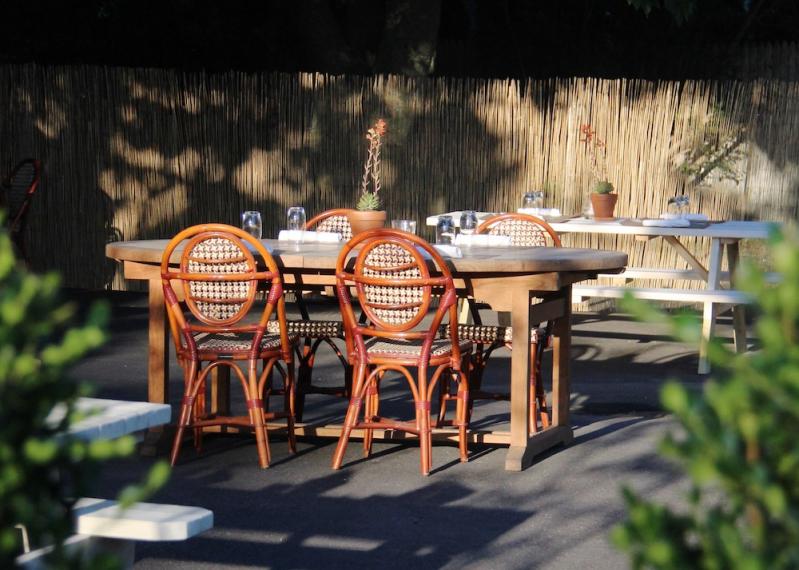 An outdoor dining area at Fresno in East Hampton. As of earlier this week, the restaurant was planning to continue focusing on outdoor dining even though indoor dining is now allowed.
Durell Godfrey
By Jamie Bufalino

Restaurants are allowed to welcome guests indoors now that Long Island has entered phase three of reopening as Wednesday, but because of safety concerns, several East End eateries are opting to stick with outdoor dining and takeout instead.

According to state guidelines, restaurants can provide indoor dining at 50 percent capacity, with tables six feet apart, staff wearing masks at all times, and customers wearing them when not seated. Six feet of distance must also be maintained among those in line to use the bathroom, and to pay at a cash register.

Nick and Toni's in East Hampton, Coche Comedor in Amagansett, Townline BBQ in Sagaponack, and Rowdy Hall in East Hampton Village, all of which are owned by the Honest Man Restaurant Group, are adjusting their layouts to comply with the requirements and are now open for indoor dining.

For some smaller restaurants, however, the prospect of reconfiguring a space to accommodate fewer people isn't particularly appetizing. "It's not worth the risk, for, what, like four tables?" said Christina Isaly, a co-owner of Rosie's, a compact Amagansett restaurant that recently opened for its second season. Instead, Rosie's will serve guests on a newly redesigned patio, and focus, she said, on keeping up with a booming takeout business.

Beacon in Sag Harbor and Bell and Anchor in Noyac are "running into spacing issues, so it's been hard for them to open," said Ashley Fresa, an account executive at Wordhampton Public Relations, which represents a multitude of East End restaurants.

Even restaurants with more square footage are scrambling to come up with a feasible plan for indoor dining. The Highway Restaurant and Bar in East Hampton is still developing one, and Elaia Estiatorio in Bridgehampton "doesn't plan to open indoors for the time being," said a representative of the restaurant.

The same goes for Fresno in East Hampton Village. And Bostwick's on Pantigo Road in East Hampton has been doing so well with takeout "they really aren't in a rush to open indoor or outdoor dining at the moment," she said.

Indoor dining is completely off the table this summer at Ruschmeyer's in Montauk, which opened on Wednesday. "I personally prefer the outdoors, and we have such a beautiful lawn, over 10,000 square feet of space," said Enzo Lentini, the general manager and executive chef. Customers can use the restaurant to pick up takeout orders and to use the bathroom, but dining will be strictly alfresco. "That way people can relax a little more," he said. The atmosphere at the restaurant, which has been known for attracting a younger crowd, particularly in the outdoor dining area, will also be a bit more upscale this year. "The Ping-Pong tables are still here, but we're going to concentrate on fine dining," Mr. Lentini said.

The outdoor area can accommodate 162 diners at 27 tables that are spaced 15 feet apart, he said, but, in an effort to be cautious, the restaurant will limit the number of people allowed on site, at least in the near future. There will be two dinner seatings per night. In case of inclement weather, guests will be able to huddle under 15-foot-wide "beautiful umbrellas," said the chef. Ruschmeyer's will not accept walk-ins, so reservations are mandatory.