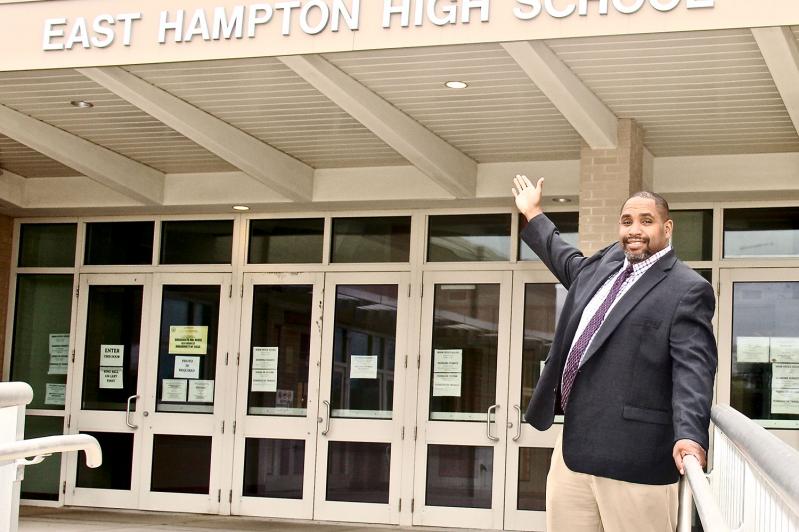 After James Crenshaw's initial interview for the position of principal at East Hampton High School, he didn’t hear anything for a long time. Which had nothing to do with the application process. Because of the wrench Covid threw, "Honestly, I was like, 'Okay, I guess that's not happening!'"

A few interviews later, however, the job was his, as he completed his work as principal of Eastern Suffolk Board of Cooperative Educational Services' Westhampton Beach Learning Center.

A big part of being a principal are the names and faces, which he had yet to learn even without the masks. "You do the best you can," he said, laughing. "I was in a classroom today and I had to do a double take because I think I saw this student one time without a mask on, and then the student had a mask on in the classroom and I was like, 'Is that the same. . . .' "

Obscured smiles are another oddity. "That's a huge thing, right? In terms of making connections with people. You don't see it but you can still hear the laugh."

Mr. Crenshaw said what was most unexpected, "and it's going to sound crazy, knock on as much wood as I can," is how well things are going based on feedback and touching base with other districts. And it's not so much luck as it is work and thought put in on the front end. Mr. Crenshaw may be a fresh face at the school, and certainly everyone is coming fresh to Covid times, but there is nothing new to him about being practical.

Richard Burns, the district superintendent, affirmed the feeling that Mr. Crenshaw has things under control. "I wish he had a different year to start in our district," he said with a laugh, "but he's done a tremendous amount of planning."

"He's up and running very quickly," he said, adding that despite the less-than-ideal circumstances, "with all the planning, it's been nice to have the kids back, and he's looking to give them a warm and meaningful year."

Mr. Crenshaw made a singular effort to get the kids back safely, and the reason he pulled it off, Mr. Burns said, was that he "really communicated very well, not only with district administration, but the other principals, so we had a unified response."

As to the process of preparing for the school year, Mr. Crenshaw said he has a tendency to approach anything by planning for everything. "The understanding is that you're probably going to miss a ton of things," and by going into overdrive at the beginning, there are fewer surprises along the way.

As a new principal, there were matters about which he had yet to gauge a baseline reading, "like students walking into school. I had a fear of, 'Oh my God, it's going to be a stampede, and how are we going to get all the temperatures checked!' "

The first day, he reported looking around and saying to himself, "Oh, this is it? This is not nearly what I thought." It helps that half the usual number of students are in the building at one time, which makes the hallways in between classes, another concern of Mr. Crenshaw's, a nonissue as well.

Still, "there's no substitution for full, five-day, in-person school, and we're kind of always playing catch-up in that regard," Mr. Crenshaw said. "The hardest part is that we're the tip of the spear. No one's ever really done this before. So I'm the type of person who likes to do their research, what's happened in the past, but there isn't a large body of research about the pandemic and how you educate and do it via live-stream."

Keeping people in the loop has been important for transparency, but it has also been constructive in other ways. At a parent meeting, it was brought to his attention that full-time remote learners would still need textbooks, so days and times were scheduled for pickup. And if any are uncollected, "We'll have to figure it out. Whether it's phone calls or me going after school at 4 o'clock and driving them around!"

Mr. Crenshaw reckoned there was "a decent chance" he was the school's first Black principal, but most notable to him has been the community's support and understanding. Teachers have adapted to the new normal and made things easier by working together. "On Friday, we're already better than the way we were on Monday."

A parent feedback survey sent out last week is proving useful. It comes down to the "support and patience of the entire community . . . the parents, the students, the teachers, the board, the upper administration — it's really been a team effort. I know it's so cliché and corny, but that's been the reality."