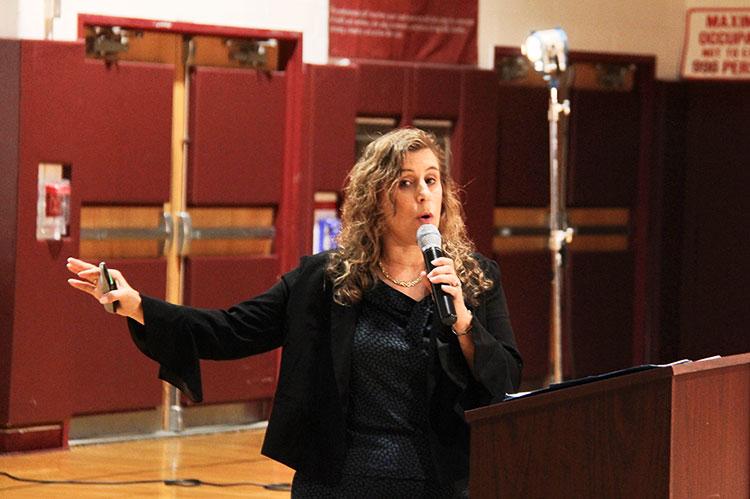 Dr. Bonnie Halpern-Felsher is a co-author of a new study related to vaping and Covid-19.
Durell Godfrey
By Christine Sampson

When a group of student advocates at East Hampton High School coordinated a community meeting last fall on the harmful effects of vaping among young people, they didn't know that a respiratory illness called Covid-19 was going to settle over East Hampton, and the world, like a dark plume.

A new study, coauthored by one of the medical experts who visited East Hampton last year to talk about vaping, has connected e-cigarette use to an increased risk of Covid-19 infection among people ages 13 to 24.

And now, motivated by the patterns of tobacco use among their peers, the student group, called Breathe In Change, is renewing its efforts to educate other students about the dangers of tobacco use — including cigarettes in addition to e-cigarettes, according to the students.

"There's a lot more cigarettes out here now," Lucia Ibrahim, an East Hampton senior and co-founder of Breathe In Change, said in an interview last week. She described seeing small groups of friends "follow the [Covid-19] guidelines, but they would still pull down their mask and smoke."

Some young people even vape through their masks and they often share e-cigarette devices, the students said.

Breathe In Change gained momentum last year as its members visited local middle schools to share their research, experiences, and anti-vaping message. They even traveled to Washington, D.C., to testify for a Congressional committee about vaping. They collected followers on social media and planned health class visits for young kids — all until the pandemic hit, forcing schools to shift to online learning and halting the work Breathe In Change was doing.

But Covid-19 didn't stop young people from using tobacco products and Dr. Bonnie Halpern-Felsher, a pediatric professor and researcher at Stanford University, and two co-authors, Dr. Shivani Mathur Gaiha and Dr. Jing Cheng, have shown that 13-to-24-year-olds who have ever vaped are five times more likely to contract Covid-19 than those who have not. Those who have ever vaped and used cigarettes together within the last 30 days are seven times more likely to get Covid-19, the study shows.

"We interpret the findings in a bunch of ways," Dr. Halpern-Felsher said by phone on Friday. "Vaping and smoking damage your lungs, and therefore if you are exposed to Covid, you are more likely to have symptoms or get sick. Or you take the mask down to vape and therefore you're exposing yourself more to the virus, even if you're outside or with friends."

The study was published on Aug. 11 in the Journal of Adolescent Health. It centers around survey responses, collected in May, from 4,351 teens and young adults from across the United States.

"Our study was really the first and it's a large study in terms of the number of participants, but it was a short paper," Dr. Halpern-Felsher said. "The idea was to get the information out and allow people to have a conversation, and to hope that we have additional studies to expand and replicate the findings."

The founders of Breathe In Change said the pandemic and the study have them feeling motivated to renew their advocacy efforts.

"I feel like people our age aren't really concerned about that. Maybe it's that they don't know or they just don't care," said Samantha Prince, another founding member, who has graduated and is now studying at Yale University.

"Now we need to add 'Juuling' during a pandemic as well as the link to cigarettes. That's what it has evolved to," said Valeria Guevara, an East Hampton senior who helped establish the group last year. "Juuling" is slang for vaping, referring to the brand Juul.

Several other Breathe In Change founders have graduated, and they all nominated a younger student to take their place at the table. But challenges lie ahead.

"It's going to be rough" picking up where they left off, Lucia said, because some group members are doing school online this year and most aren't in the same learning cohorts together.

They will also confront patterns of addiction in general — alcohol and drug use in addition to tobacco products — as the pandemic has exacerbated those issues. Millennium Health, a national laboratory, analyzed 500,000 urine drug tests and found that from mid-March through May of 2020, fentanyl use had increased by 32 percent, use of methamphetamines by 20 percent, and cocaine by 10 percent. And the pandemic has made it harder for people to seek treatment.

"A lot of my friends started self-medicating in March. They weren't sober from March to June," said Erin Kennedy, a group member who is now studying at Trinity College in Dublin, Ireland, through Columbia University.

"It freaked a lot of people out, being home 24/7 basically," Lucia said. "It threw so many people for a loop."

Dr. Halpern-Felsher called for the U.S. Food and Drug Administration to tighten rules governing access to tobacco products for young people. "Now is the time," she said in a statement. "We need the F.D.A. to hurry up and regulate these products. And we need to tell everyone: If you are a vaper, you are putting yourself at risk for Covid-19 and other lung diseases."