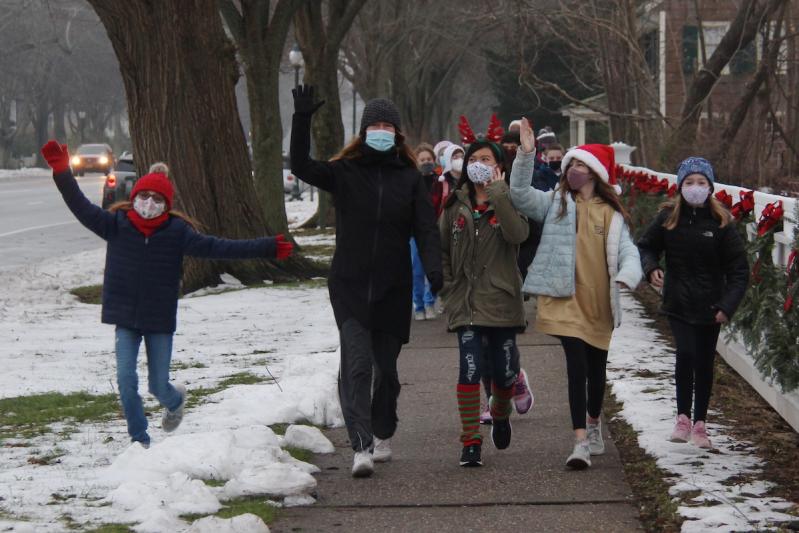 Four out of five East Hampton Middle School students agree: Going to school during the Covid-19 pandemic is tougher than it was before. Also, a disclaimer: In no way is that a scientific statistic, as the sample size was pretty limited, but the point is still accurate, according to the students themselves.

"There were more things to do that we can't do now," Emma Hand, a sixth grader, recalled during a Google Meet interview last week. "It's a little bit harder, but at least we get to go to school."

"I'm new to this school, so I don't even know half the kids in my grade," said Charlie Stern, a seventh grader.

"It's harder now because of the amount of time we're spending on screens, on the Chromebooks," said Lilah Brown, a sixth grader. "You go from 7:30 in the morning to 2:40, and that's a long period of screen time."

By its nature, middle school is difficult to begin with. In June, the Hechinger Report, a nonprofit national news outlet, wrote that "early adolescence is a time of rapid cognitive changes, when kids assert their independence from parents, form their own identities, and become hyper-dependent on (and sensitive to) interactions with peers. Their 'social brains' are developing quickly, and they are hoovering up information from the world around them to figure out who they are and how they fit in." A paper published in May by a team of Brown University researchers projected that because of Covid limitations in schools, sixth and seventh graders' retention of math and reading skills would be diminished. Only as much as 10 percent of the students' "normal learning gains" in math and 15 to 29 percent of new reading skills would be retained, the study concluded.

That's why Charles Soriano, the East Hampton Middle School principal, and his faculty and staff members are working as hard as they can to maintain a sense of normalcy for their students.

"You're stuck between two worlds," Dr. Soriano said. "You're not an elementary school student, and you're not a high schooler. We're so lucky that we have a building specifically dedicated to 11, 12, and 13-year-olds, because they are unique."

At the middle school, students are divided into two groups that each attend school two days per week, either Monday and Tuesday or Thursday and Friday, and on alternate Wednesdays.

The cornerstone of education at East Hampton is that "it's not just about the academics," Dr. Soriano later continued. "Although that's extremely important, kids need to have the opportunity to practice social skills and work their emotional muscles in a safe environment."

There are periodic Spirit Days, in which students could wear their pajamas to school or dress in mismatched clothes, for instance. And since the start of the school year in September, several clubs have been phased back in. They include the homework club, chess club, book club, Scrabble club, Surfrider Club, and the Gay-Straight Alliance. Waves, the literary magazine, is also back, and there's even a student photography contest going on to involve the wider student body. Students have been challenged to take pictures related to the theme "knowledge is power" for a potential cover for Waves, with one tricky rule — they can't enter pictures of people or pets, so often at the heart of a middle schooler's heart, meaning they'll have to really think deeply about the task at hand.

Sports teams, plus the Bonettes, an elite choral club, and the very popular dance club, are among the activities that haven't been reinstated. "There are health and hygiene issues around clubs like that, but we still have 15 offerings after school," Dr. Soriano said. "Especially because we're not running sports, this is a great opportunity for kids to have an outlet but be supervised by adults."

Last week and this, there were modified versions of the middle school's longtime holiday traditions. On Tuesday there was to be Jingle Bell Walk, not run, before school that encouraged wellness and socially distant socialization. Students were treated to Dreesen's doughnuts, provided by the PTA, and hot cocoa, which was donated by Whitsons, the school's food service vendor, though students enjoyed them in classrooms instead of in big groups.

"It's dangerous to be in a closed space taking off the masks and eating. We had to think through the health consequences," Dr. Soriano said. "We were committed to doing it, but it had to be done differently."

There was unanimous head nodding when the group of students were asked during an interview whether Covid-safe versions of school activities were meaningful.

"It definitely helps keep our spirits up because we don't get to be in the same classes as all our friends," said Mia Mussio, a sixth grader.

"I think Mia really nailed it. It makes us all feel together more, and that's such a good thing now," Lilah added.

"It's a break from learning nonstop, and it lets you relax a little bit and remember that we're all a school even though we're going through all this," Emma said. "We're apart together."

The students also said they see the adults around them trying to make things feel as normal as possible, and agreed that those efforts make them feel special.

Appropriate for this time of year, the students have middle school wish lists -- things they wish they could do right now.

"Everybody could kind of get together during recess and play a game of something as simple as Red Light, Green Light," Lilah suggested.

While each suggestion had merit, Dr. Soriano said, the truth is that Covid still has a fairly tight grip on schools, even though contact tracing has shown that schools appear to be safe because that is not where the virus is being spread.

"We want them to be comfortable and confident. It's not about denial — it's acknowledging what the reality is," Dr. Soriano said. "This is a really hard situation for a lot of people. It's about saying this is how we can move forward, do the best we can, and try to maintain normalcy. We have to look toward the good, because there are positive things happening."