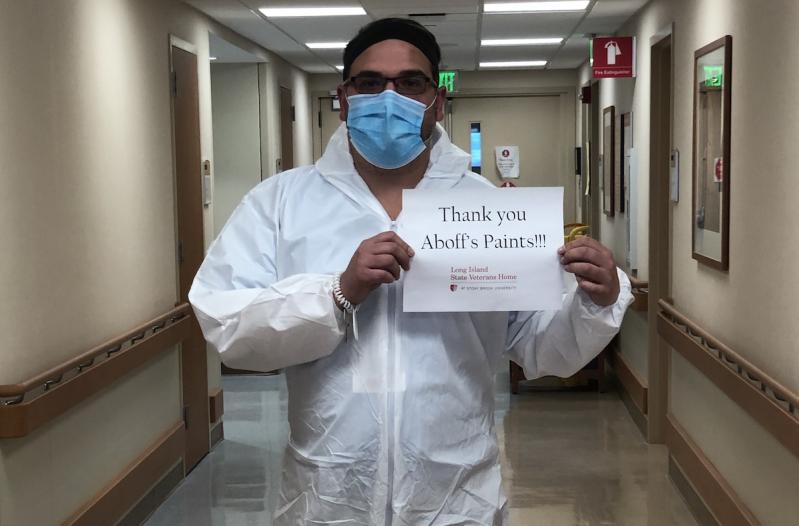 In the pandemic's early days, the owners of two Long Island businesses, Ken Wright of Wright and Company Construction in Bridgehampton, and Matthew Aboff, who has 32 painting supply stores across the Island, stepped up big time when it became known that a severe shortage of personal protective equipment for the Island's health care workers was looming.

"My sister was working in the I.C.U. at Good Samaritan Hospital in Islip, and saw what was happening," Mr. Aboff said recently. "We donated 17,000 N95 respiratory masks that painters use -- our entire inventory except for those that we reserved for our employees -- to many of the hospitals on the Island, including Southampton, the Stony Brook network, and Northwell. . . . The medical grade N95s have a fluid-resistant coating, but with surgical masks worn over our N95s, people were protected."

"It was our way of giving back to the community in its greatest time of need," Mr. Aboff said.

Mr. Wright, the chairman of the Southampton Hospital Association, acted quickly once Dr. Darren Wiggins, of the hospital's emergency department, told him he saw a severe P.P.E. shortage looming.

Within only a couple of weeks, Mr. Wright, his brother-in-law, Michael Reilly, Mr. Reilly's wife, Dorothy, "who, among other things, can sew," and the Riverhead Building Supply Corporation were producing at Reilly Architectural's factory in Calverton the first of 10,000 patterned polyethylene plastic isolation gown "blanks" to which finishing touches were added by 100 volunteers and which were stored at the Tuckahoe School, whose superintendent, Leonard Skuggevik, had stepped in to help.

"They were a godsend to our front-line staff," said Dr. Fredric I. Weinbaum, the hospital's chief medical officer.

"Nobody said no when I called," said Mr. Wright when asked how he came to assemble so many volunteers in such short order. "It was in the early days of the pandemic and everybody was confined to their homes sort of. People were feeling a bit lost and frightened and were wanting to help. I tell you, it was the greatest feeling of being part of something worthwhile when people were feeling helpless."

"I am truly proud to be part of a community known for its creativity, inventiveness, and charitable purpose," Dr. Weinbaum said. "The support we received and are receiving through this challenging time has been essential to the morale and well-being of our health care team."