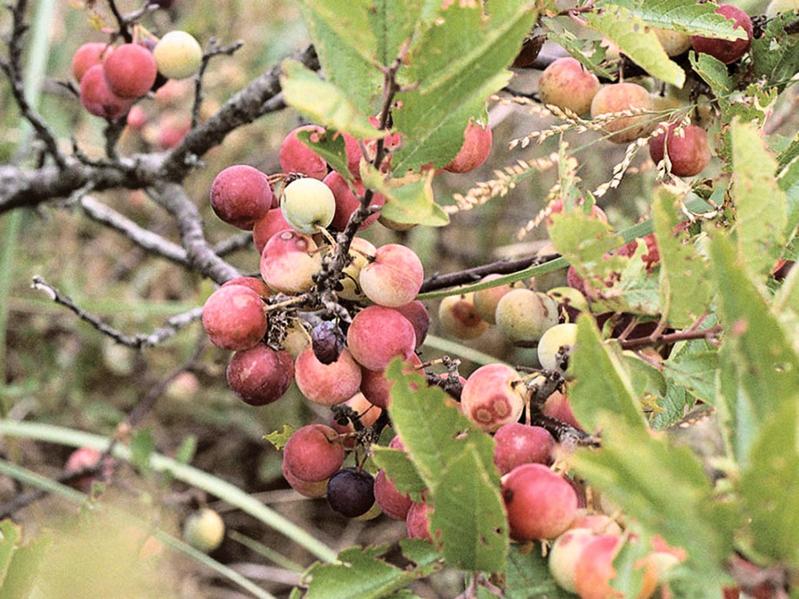 The Shinnecock Hills of my childhood in the 1950s looked much like the Parrish Art Museum’s iconic painting “The Bayberry Bush” by William Merritt Chase. No four-lane highway, a few more groves of pine trees, but the dunes were still filled with clusters of bayberry and beach plum bushes, switchgrass, golden aster, and white-sand paths.

Although Chase’s painting shows his daughters picking bayberries, my sister and cousins and I had little interest in those tiny, waxy berries loved by birds and once laboriously used for making candles. The Shinnecock Hills bushes we loved had small oval leaves and branches laden with succulent, purplish-blue beach plums for making beach plum jelly.

Chase’s daughters may have dressed in white dimity dresses for berry picking, but we wore pants, shirts with long sleeves, and sturdy shoes to avoid prickly branches, poison ivy, and bugs. Unseen in Chase’s sun-filled panoramic Shinnecock Hills paintings are the many biting mosquitoes, chiggers, and menacing black flies with their high-pitched buzz. Beach plum picking is challenging; it is not a gentle outing.

By late August, beach plums are ready to pick. In the early morning, we enthusiastically set out with tin buckets to gather as many as we could to take to our grandmother who oversaw the jelly making. As the morning progressed, we often nibbled on the ripest plums — their juicy flesh a mix of a strawberry, a plum, and an apricot. As the buckets filled, our enthusiasm waned, and by high noon we headed home. After a shower with castile soap to remove any poison ivy oils and a check for ticks, we ate a hearty lunch.

Late in the afternoon, it was off to Grandmother’s house in Southampton. Her kitchen was made over with a bewildering array of preserving pots, muslin bags, sacks of sugar, and a box of glass jars. Delighted with our stash of freshly picked beach plums, we watched as she measured 10 cups of beach plums and two cups of water into each waiting pot on the stove. While the plums simmered, we entertained ourselves at the piano until called back into the steamy, sweet-smelling kitchen, where we watched cooling fruit juices drip from hanging cheesecloth bags into glass bowls.

The final steps of jelly making came after dinner when sugar and liquid pectin were added to the beach plum juice and simmered until it became a syrupy liquid that was poured into sterilized glass jars to cool. The next day, Grandmother topped off each jar with a thin layer of melted paraffin, secured the top, and added a label. It took another four days for the juice to gel and only then could we triumphantly spread our elixir on toast at breakfast and on top of vanilla ice cream for dessert.

As native beach plum bushes became lost to development, those that survived became increasingly difficult to find. It was Aunt Jane who conquered the tricky hunt for beach plums. She planted a row of six domestic beach plum bushes in her Bridgehampton front yard. Every year her bounty of six bushels of the chalky purple fruit resulted in 35 hand-labeled jars of beach plum jelly. No one seemed to taste the difference between domestic and wild jelly. As you know, you can’t buy commercially made beach plum jelly, and Aunt Jane’s coveted jars of the sweet nectar never ceased to be in demand.

Less well-known Chase paintings do show his daughters picking beach plums, and a photograph of his wife, Alice Gerson Chase, in the Parrish Art Museum’s archives shows her putting jars of her beach plum jelly into a storage cabinet. You can see in the old photograph that she decorated her jars with a square cloth over the top held in place with a string from which hung a heart-shaped label.

Indeed, that heart reminds us that we are all caretakers of the bays and lands, native plants, and sand dunes of the eastern end of Long Island. Save the beach plum bushes, plant new ones, and carry on this unique and delicious culinary tradition.