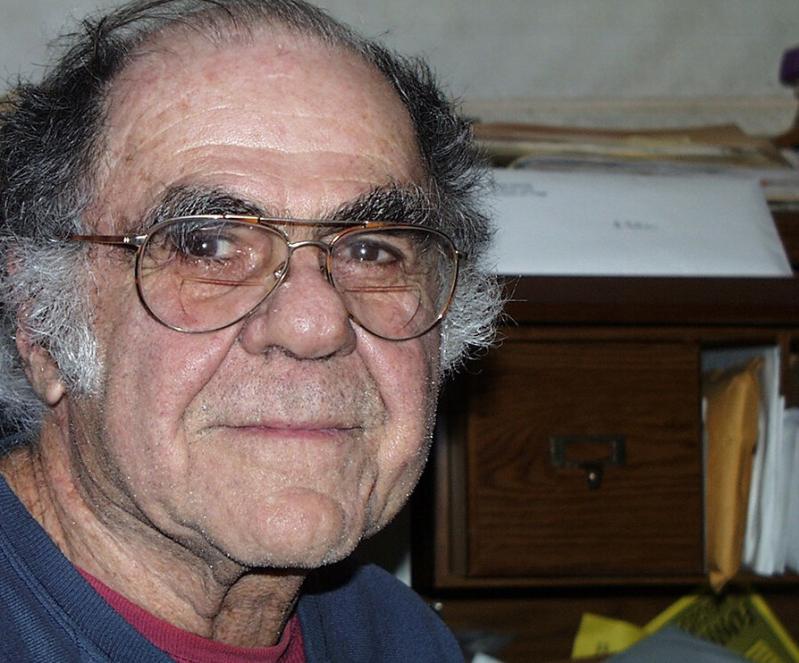 Simon Perchik lived a narrow life, some would say, because as a poet he was as dedicated as a monk to his vocation. These same people, and I am one of them, would say he lived the widest life, domiciling in a universe of creativity along with a treasury of family and friends.

It was an intense one, whether he worked on his poems to a depth of insight or on the handball courts at whichever Y.M.C.A. was closest. He was a fighter, I would imagine, as a kid in a large family in Paterson, N.J., and he was certainly a fighter during World War II as part of a bombing squad that took out Germans when he was only 18 years old. He was a fighter in environmental causes on the South Fork, and he was an ambitious and fiery fighter as a poet.

But he opened the lid of his mailbox down the road from his house in Maidstone Park gingerly every day. If the offerings did not provide an acceptance, the box was assured of a second round to come. His discipline was awesome, and it led to wide publication among little magazines and small presses, so much so that Library Journal at one point called him the most widely published unknown poet in the country. Si’s discipline also led to publication in big magazines, including The New Yorker, Poetry, The Nation, and Partisan Review, so he really was known, but Si loved the compliment.

He also appeared in the midsize magazine I co-founded and edited for 42 years, Confrontation.

I knew Si as a poet, as a friend, and occasionally as a disputator. Si’s beliefs were fierce; he was a passionate believer in the rightness of things, as he saw them. I remember him taking a cigarette from the lips of a friend, the editor Sara Blackburn, as we sat in a Greenwich Village restaurant. Definitely though tenderly he told her he was doing the right thing for her. Sara accepted his argument; Si was the bigger of the two.

I met Si when I was an undergraduate at the Washington Square college of New York University and he was at N.Y.U. Law School. In those years, the immediate post-World War II years, N.Y.U. had only one cafeteria for students, and Si and I became acquainted at a talking table that included Alfred Chester, Edward Field, Alvin Toffler, Sol Yurick, D.H. Melhem, and occasionally Cynthia Ozick, who was more religious about getting home than we were. As any post-college student can tell you, the conversations were more exhilarating than particularly illuminating. But what fun they were.

Si at that time rarely spoke of his war experiences, though most of us, who were too young for that war, and the other wars were still to come, were in awe of him and Ed Field. They were Air Force men who had won the war for democracy, and they had beautiful bomber jackets they wore from time to time. Later Si would put the experiences into his first book, “The Bomber Moon,” whose pages he mimeographed, and those same pages his wife, Evelyn, collated and stapled with a brown cover in his six-floor walk-up apartment on Mott Street. The job began early in the evening and by midnight it was done, and the three of us celebrated with a bottle of cheap red wine. None of us could afford a better bottle at the time.

I got to know Si in his boxer shorts. It was a summer night in 1950, and Si had invited me to a get-together. He lived in a large apartment — five rooms with a great view of Manhattan north and south, but the apartment was a cold-water one, meaning no heat was provided when winter or cold autumn settled in. The toilets were situated in the middle of the hallway, two for the four apartments on each floor. Baths had to be taken by hand-washing in the large industrial sink in the kitchen. Si’s roommate, Norman Morse, affectionately or otherwise known as Moose and another Air Force man, had invited his girlfriend, Marian, up for a party, and she was going to bring a blind date for Si. Marian was a nurse at Bellevue, and her friend Evelyn Rossetti was a colleague. (In East Hampton she was known as Mickey.)

Possibly Si chose to dress for the weather but in any case was going to be informal. He stayed in his boxer shorts and bare chest for the occasion. The sartorial exhibition did not phase Mickey or Marian; they were after all nurses at Bellevue and accustomed to unconventional appearances.

Perhaps it was the boxer shorts, but in any event Si and Mickey clicked, and a few months later married. I attended their wedding parties later, and Si had graduated to full dress. (The nurses incidentally were very nicely dressed.)

Si and Mickey’s marriage grew stronger over the years as Si wrote more and more and Mickey took on the household chores and worked in community affairs. Along the way three children came. They became part of Si’s poetry life, it couldn’t be ignored, and they participated in computerizing his submissions and promoting his work.

I don’t know if readers know the trajectory of those years — Si worked in law firms but did not like the corporate spirit. He opened his own law office in an East Village storefront. The family moved to a house on Staten Island, and Si loved taking the ferry to his East Fifth Street office. The water imagery observable in his poetry probably began as early as the ferry rides, which for Si could be at dawn.

Even when working as a lawyer, Si took summers off to write full time at their house at Maidstone Park in Springs. Those summers sufficed for a while, but Si’s love of poetry, his stubborn demand for its place in his life, led him to retire at a fairly young age and move full time to Springs. He became active in poetry gatherings with colleagues like David Ignatow, Ed Butscher, Phil Appleman, Allen Planz, Siv Cedering, and Carol Berge.

His discipline became the talk of the town when he decided to write in a cafe or diner for three, four, or five hours at a time. He would get up at a very early hour, have a cup of black coffee and a hunkish slice of dark bread, and go off to the Golden Pear, Citerella, the pizza parlor opposite the old A&P, the Y.M.C.A. annex, or a desk in the East Hampton Library.

Si’s poetry is visceral and visual. In later years he often used a photograph to motivate his imagery. It started probably with Si’s interest in the “Family of Man” series by the photographer Robert Frank. It led to Si’s longest book, a mammoth collection of poems stemming from Frank’s photographs. It is appropriately called “Family of Man.” While the poems stem from Frank’s photographs, they take on an individual Perchik angle. Si drew on an image that came to him by staring into a photograph and catching the elusive streak of correspondence between the photo and his own referential companion of passion. That correspondence of meaning is not always easy to understand, but its passion never abates from Si’s poetry, and its passionate meaning reverberates with each reading.

Si published more than 30 books, and they are likely to keep circulating for a long time. Even in his final days, when he could hardly walk, he tried to draw on the vibrancy of his youthful passions. He couldn’t do it, as his son-in-law told me — it was the last of his defenses to fall — but the passion remains in the poetry. And that is a lucky thing for all of us.