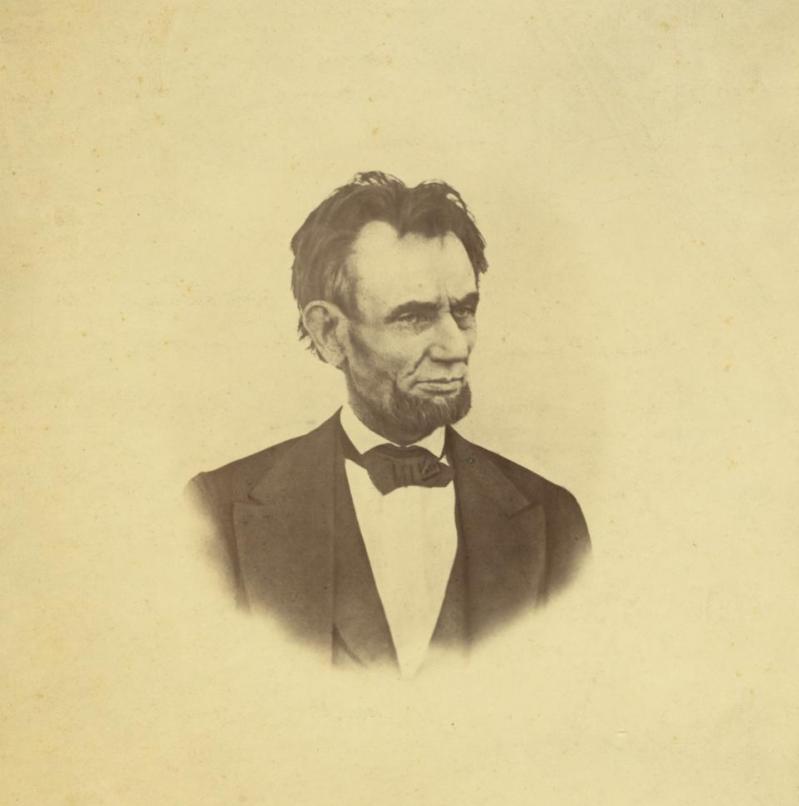 Henry F. Warren’s March 6, 1865, photo is the last one known to have been taken of Lincoln while he was alive.
Library of Congress
By Candace Whitman

A little-known aspect of Abraham Lincoln’s presidency was his plan to depolarize the nation after the Civil War. This extraordinary strategy is described by John Avlon in his recent book “Lincoln and the Fight for Peace,” previously reviewed by this newspaper and deserving of every bit of exposure it gets, especially for those, like me, who are anxious for a path out of our current political entrenchments.

Mr. Avlon, a CNN anchor and political analyst, provides a close-up of Lincoln’s presidency so as to suggest possibilities for our own polarization, almost as extreme as in Lincoln’s time, when our nation was imperiled by its war.

As a pastor, I find it both heartening and intriguing that Lincoln’s political genius was based on spiritual wisdom that reflected the instruction to be “as wise as a serpent and innocent as a dove” in navigating the challenges of this world. This saying is from the teachings of Jesus, in whom Lincoln apparently gravitated for guidance as he shouldered the tremendous responsibility of finding a path for our nation back to unity. Fortunately for us, Lincoln had a genuine desire to do the right thing, and he had the boldness — or naïveté — to assume that his personal convictions could gain traction in a country rife with hostilities.

Lincoln’s strategy was to deal generously with the Confederacy. He pressed his Union generals for a full victory in the war, but rejected all demands from his party to punish the “rebels” afterward. Lincoln pursued what would be known as a “magnanimous peace,” setting his mind toward reconciliation, not recriminations. He set reasonable terms for Confederate soldiers and officers to resume civilian life and rebuild their towns and cities, giving them support and a stake in their own future.

This was a “revolutionary new way of winning the peace,” writes Mr. Avlon. It was also a way for Lincoln to achieve another aim, which was to deal respectfully with the defeated, quelling lingering resentments that might result in another war erupting soon after.

Lincoln also prescribed a way by which the deep division between the races could be addressed once the Emancipation Proclamation took effect. He established the Freedman’s Bureau to help the formerly enslaved achieve independence through an education and the ability to own land. He urged Southern states to be intentional about fostering integration, so that people could learn — albeit gradually — to live together as equals.

Lincoln’s generals, remarkably, fell in line with the idea of a magnanimous peace. At Appomattox, Confederate Gen. Robert E. Lee faced the Union’s Ulysses S. Grant for the terms of surrender, and Grant exercised compassion on the defeated, setting reasonable expectations for the South. As the meeting ended, Lee asked Grant for food for his starving troops, although he couldn’t say how many were left. Grant asked if 25,000 rations would be enough and Lee said yes, “I think it would be ample.”

Reading the Bible frequently, according to Mr. Avlon, Lincoln saw words about loving our enemies, and went as far as wanting to expunge the word “enemy” from our vocabulary. Lincoln’s wife, Mary, riding with him in a carriage one day, pointed to a distant group of buildings and said, “That place is full of enemies!” Lincoln insisted she never use the word again. “Do I not destroy my enemies by loving them?” he once said.

His commitment to humanizing the people others vilified was demonstrated even in his less public actions as president. One of the most compelling stories in Mr. Avlon’s book is the president’s visit to a huge field hospital toward the end of the war. Lincoln went from bed to bed, shaking hands with the wounded and offering tender words. One patient from Vermont later recalled that “his homely face became absolutely beautiful as it beamed with love and sympathy.”

When Lincoln saw the tents that held the sick rebel prisoners, he hastened to visit there as well — despite objections of the Union officers. Again, he went from bed to bed and greeted the patients. When he offered his hand to one officer, Henry L. Benbow, Benbow asked the president if he realized he was a Confederate colonel who had fought him for four years. Lincoln replied, “Well, I hope a Confederate colonel will not refuse me his hand.” They shook, and Benbow later recalled that Lincoln “had me whipped from the time he first opened his mouth.”

To Lincoln, the commandment to “love your neighbor as you love yourself” would never have an exception. When asked about racial justice — although some might question his motivation for ending slavery — he answered, “As I would not be a slave, I would not be a master. This expresses my idea of democracy.”

In addition to his policies and his actions, Lincoln’s soaring rhetoric conveyed his vision and his hope to the beleaguered nation. In his now-famous Second Inaugural Address on March 4, 1865, Lincoln lifted the nation’s eyes beyond the strains of the moment. He passed by the ideology of his political party and drew on a higher principle that could help him steer the ship out of continuing conflict. In his speech, Lincoln spoke of a just God who had his own purposes for the war. He stated that God would not accept any justification for slavery, but at the same time God would also not have us judge one another.

Somehow Lincoln’s theology illuminated for the listeners the problem and also pointed to the solution, and he asked the nation to join together in letting right make might. Lincoln’s last paragraph reverberates with its stunning graciousness:

“With malice toward none, with charity for all, with firmness in the right as God gives us to see the right, let us strive on to finish the work we are in; to bind up the nation’s wounds, to care for him who shall have borne the battle, and for his widow, and his orphan — to do all which may achieve and cherish a just, and a lasting peace, among ourselves, and with all nations.”

Tragically, the gunshot wound inflicted by his assassin, John Wilkes Booth, on April 14, 1865, at Ford’s Theatre ended the peace that Lincoln had so boldly set in motion. His successor, Andrew Johnson, possessed none of the spiritual or political leadership of Lincoln, and Reconstruction was a disaster. Corruption and a virulent racism took root.

But Lincoln’s legacy, amazingly, still shone a light, one strong enough to brighten the hopes of Americans down the decades. One of the strengths of Mr. Avlon’s book is his review of how Lincoln influenced later presidents such as Harry S. Truman, who, emulating Lincoln, chose after World War II to turn a foe into a friend in Japan through the Marshall Plan. Similarly, Lucius Clay, whom Truman assigned to oversee the occupation of Germany, also sought to do specifically what Lincoln would have done in the South had he lived.

But now it seems the “enemy” is right here with us, across the aisle, across the street. Perhaps the small steps toward bipartisanship we have seen of late will continue. But is there something we can learn from the long-ago Lincoln? Mr. Avlon understands that while we would like to know how things would have played out had he lived, “what Lincoln left us is enough.”

What he left us, I believe, involves a word rarely used in politics today: love. Lincoln left us the footprints of someone who walked what he talked, following the words of Jesus and understanding them to be universal in their application. He did not shy away from love’s radical nature, and allowed the power of his presidency to come from a love let loose in the real world, being constructive as he corrected wrongs, and setting a tone that would allow for healing between those entrenched in their positions.

History shows that the mark of strong spiritual leadership can be in the resistance it receives. In the first century, Caesar and the religious elite crucified Jesus of Nazareth for bringing the divine rule of love to earth. On the same day, interestingly, Good Friday in 1865, Lincoln was shot for daring to suggest that one day Blacks would vote. The problem with love as a governing principle is not that it is wispy or weak or too idealistic; the problem is that it cannot be hidden once it begins to work. Unfortunately, in the light of love some people will do anything to not be exposed, even if forgiveness is in the wings.

Lincoln’s work as a peacemaker was not completed, but we have seen enough of his principles to go to work. Either our politics and relationships today begin to reflect his hope, his magnanimity, his love, or our fight for peace in our nation will continue far longer than it needs to.

The Rev. Candace Whitman is a pastor-at-large for the Presbytery of Long Island. She lives in East Hampton. John Avlon, who lives in Sag Harbor, will be at Authors Night in East Hampton Village on Saturday.