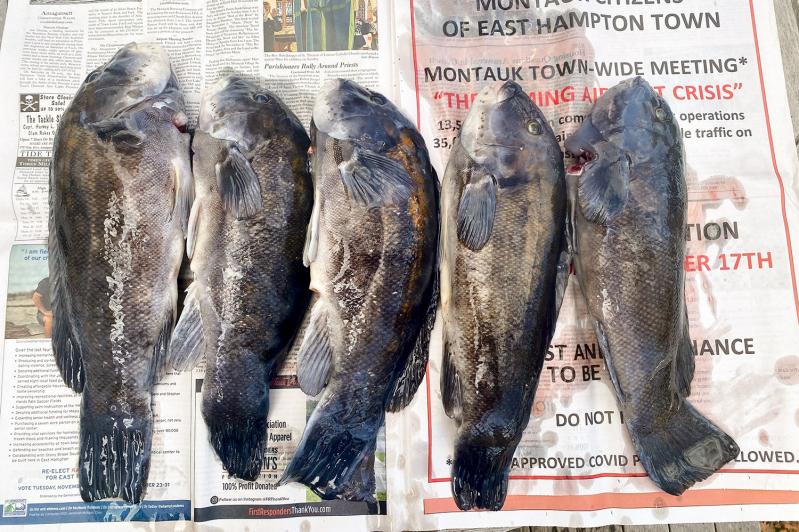 I was sitting there trying to get my mind around the relationship between Steely Dan’s “Your Gold Teeth” and Steely Dan’s “Your Gold Teeth II” when my thoughts drifted to fishing. These two tunes are set in places where luck and chance are the coins of the realm, and they always conjure for me the image of Queequeg sitting on the deck of the Pequod throwing his whalebone dice for prophecy. From there, it was an easy turn of the imagination to fishing, even though my fishing skill level is closer to an August snapper derby than to an epic whaling voyage.

In fishing, I’m 100-percent self-taught late in life. A lot of anglers out here had fathers or grandfathers who taught them, or they grew up around fishing. The East End fishing culture and history are so rich, and everywhere you look is a pond, cove, bay, harbor, sound, or the ocean itself. I’m from Budapest, which is the capital of a landlocked country. So maybe it’s not the fault of my forefathers that I didn’t know which end of the rod was up until recently.

Five or six seasons ago, I would take my one rod on my little sailboat out to Lion Head Rock a couple of times in August and be unable to identify the fish I was catching. Now I’m trolling for stripers beyond the Lighthouse in the spring and anchoring my livewell-equipped powerboat at my secret tautog spot, which I fish into late November. So, if you’re like me, a fishing greenhorn after you’ve already gone gray, I’ve got a few tips.

The first and most important tip is to get on the same wavelength about it with your spouse. One way to do this is to take him or her fishing with you on occasion. This is a reminder that fishing’s not at all like a day at Gurney’s Seawater Spa. And then give gifts during fishing season, like a spa day at Gurney’s, to help keep everyone’s “me” time in balance.

Next, learn your spouse’s tolerance for your fishing “me” time and don’t exceed it. I’m fortunate to have the world’s most wonderful spouse in this regard; she never resents my fishing. Last season, during a particularly long run of great conditions, I wanted to head out for the fifth time in a week. I asked her if it was okay.

“Oh, no problem at all, dear. I’ll just tee up a triple feature on the movie screen.” What a lucky guy I am. No matter how many fishing days I take, she’s right there with her loving support.

Actually, as I write this, I see now that she may have been trying to tell me something.

Another important tip is to read all the fishing columns, listen to the folks at the bait shop, and talk to as many fishermen as you can. You’ll learn to speak the language, which is good to do, but take what they say with a grain of salt. That’s because the relationship between fish talk and fishing is like the relationship between Instagram and reality. Have you ever heard a negative word from a bait shop proprietor? It’s never “My customers have all been skunked, no one’s caught a keeper in weeks, and we think fluke are extinct.” No, it’s always “The bite is so heavy and action so furious that you better get your spouse a whole weekend at Gurney’s.”

My next tip is to find some fishing buddies. It’s best for learning if you each bring different benefits to the enterprise. For example, I have a buddy across the harbor who’s a phenomenal gearhead. He comes with five rods and two huge boxes full of tackle and rigging. He’s got everything from lures tied in an Indigenous fishing village on Lake Titicaca to some high-tech gizmos that not only hook the fish, but have it filleted by the time it gets up into the boat. I learn a ton from him because I’m usually content to just bait up whatever half-rusting rig was on the line from last time and send it down there.

Now, with a fishing buddy there can develop a friendly competition, especially when he’s fishing the Bolivian Butcher and I’m dropping some random rig I found on the dock, but we’re both boating keepers. Here are a few nice principles to keep in mind to set this competition on the right track:

First, to quote Oscar Wilde (the author of a short story called “The Fisherman and His Soul”), “Anybody can sympathize with the sufferings of a friend, but it requires a very fine nature . . . to sympathize with a friend’s success.” Be as happy with your buddy’s catch as your own, regardless of the score.

Second, reject any rule that says you keep what you catch. Everyone contributed to the trip in some way, so split up the catch evenly.

Third, play fair. We had one guy who was secretly loading up his hook with six spearing at a time so the fish would just look down their snouts at our low-cal presentation and head straight for his smorgasbord. Don’t Bogart the bait, my friend.

Finally, a word about some fishing trip amenities. For fishing snacks, there is a wide range of tastes. I’m as immune to seasickness as the next fisherman, but bobbing on six-foot swells dotted with three-foot seas while trying to thread a hook eye with my bait-stained fingers doesn’t exactly bring on my appetite, so I’m good with some nuts and water. My buddy does the same thing but then whips out a hero sandwich the size of slot striper with pimento olives toothpicked into it in three places. And that’s just the first course. I’m fishing with Dagwood Bumstead. My point is, when it comes to food while fishing, know thyself.

Music is another temptation out on the water, and which genre the fish prefer is the subject of heated debate. I believe it’s the Rock Steady classics, whereas my buddy swears by the jam bands. Whichever way your pleasure tends, be considerate of your fellow fishermen because sound travels far on the water.

But definitely don’t play the Steely Dan; that stuff is mostly an urban vibe. And even if you believe my take on “Gold Teeth,” remember that only Ishmael survived the Pequod’s final voyage.

Pete Jakab lives in Northwest, East Hampton. He says he spends his time trying to improve at fishing, farming, and writing after a misspent career in the city.