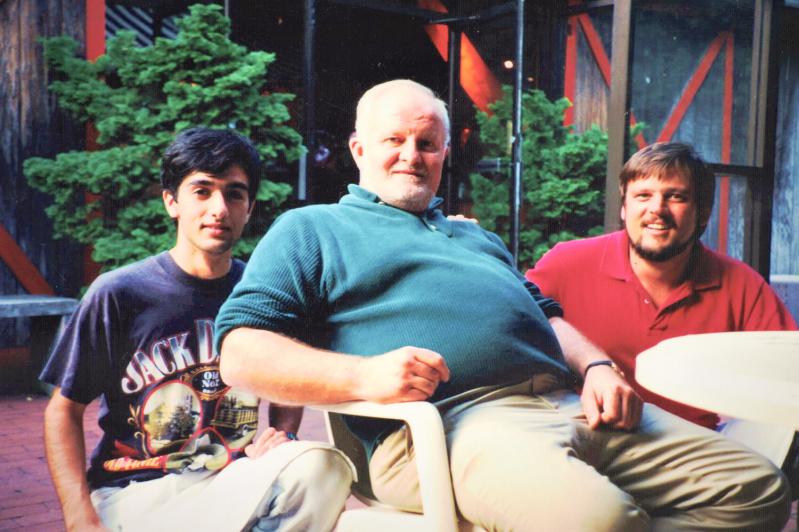 Brent Newsom and kitchen staff, Christian Lazen-Bernardt, left, and Francisco Javier Ibarrondo, right, in the courtyard at the Swamp nightclub in Wainscott in the 1990s.
Tom House
By Tom House

On the Ides of March, following a crash that closed County Road 39 on a Monday afternoon, “Man, 83,” as The Express News Group identified him, was airlifted to Stony Brook University Hospital. According to police, “Mr. Newsom was turning onto CR 39 from the north side heading east near Greenfield Road when his 2017 Kia sedan collided with a 1998 semi trailer.” Though the Kia was totaled, the driver survived.

As fate would have it, Jimmy Mack, the volunteer E.M.T. who, against his husband’s wishes, took the call on his birthday, was a former employee of Brent Newsom Caterers and recognized his old boss immediately, later writing on Facebook, “I had the great fortune to spend some time with him in the back of an ambulance. His injuries weren’t life-threatening, so we got to talking, and I thanked him for all he’d done for our community.” Brent was an icon, he said, the owner of the first gay bar he’d ever gone to. “A great man, a great loss. I just had a feeling I should take that call, and I’m so glad I did.”

Eventually Brent was taken to the Hamptons Center for Rehabilitation and Nursing, never to see the inside of his last home again — a modest, street-level apartment that easily accommodated a walker. “I drive better than I walk,” he’d told me several times the previous years, as I helped him in and out of the Kia to lunch interviews on the back deck of my Springs home.

“Tommy,” he chided, “rails.” They were insufficient, and it was slow going up the stairs to the table. Once installed, though, he was a happy camper, ready to eat tahini cauliflower steaks on red-lentil skordalia, a Purple Carrot recipe he gobbled up. He was a precise diner; had foretold me we could “skip the charred green beans” — to my delight, one less pan to clean. But roasted cauliflower? There was nothing he liked more.

Some months after the accident and his never-ending physical therapy, he tired of paying rent on a vacant apartment, broke the lease, and donated most of his belongings, including “a mother lode of cashmere sweaters,” to the Animal Rescue Fund of the Hamptons’ thrift store. It was clear he was jettisoning the paraphernalia of his life, making things as easy as possible for Gene Molina, his longtime right-hand man. Gene’s connection to Brent went deep: “He was a father to me. A kind and giving soul we will always remember.”

I first met Brent in 1988, when I was hired fresh out of college by Bill Higgins to work the Swamp disco bar. Brent was always across the courtyard in the depths of the Annex kitchen. But later I, too, would cater for him, including a couple of write-home-about gigs, like making South American-inspired rum cocktails in Martha Stewart’s rose garden. When Bill Higgins died of AIDS in 1990, operation of the nightclub passed to Brent grudgingly; he wanted to pursue his catering business unobstructed.

When at last he sold the Swamp in 1995 to a consortium of owners who endeavored to preserve the club’s identity, I stayed on as bartender and would see Brent only occasionally, usually outside the Wainscott P.O. It wasn’t until summer 2020 that we reconnected over the interviews, my eye on collecting a social history of the now-razed “almost famous” club that a generation of gay men and lesbians called home.

Brent was born in Fresno, Calif., in 1937, and grew up in the tree-lined streets of Sacramento, what he wryly called “Andy Hardyville.” He studied biology at Stanford University, and didn’t become co-owner of the Swamp with Bill Higgins until 1977, then head chef of the complex’s restaurant, built in 1978. Brent’s catering business, which he grew in the early ’90s in the restaurant’s after hours, was eventually based in various venues in Bridgehampton and Springs, until he retired in 2016.

Aside from being one of the earliest and most successful food services in the Hamptons — Ralph Lauren and Bruce Weber photo shoots, high-society weddings — Brent Newsom Caterers donated streams of food to charitable organizations such as the Gay Men’s Health Crisis, the East End Gay Organization, Live Out Loud, Southampton Youth Services, the Retreat, Miracle House, and the Nature Conservancy. Super Saturday, an event for ovarian cancer research, was attended by 1,500 guests. Brent’s reputation for pleasing even the most demanding client preceded him. He would, Gene said, “bring levity and tranquillity to the most stuffy client meetings.”

And onto the QE2. For during his well-earned downtime, Brent was indeed a recurring figure on that staid British trans-Atlantic liner. On board it was, for all intents and purposes, a gourmet-food pageant. He would go over slowly and come back fast — on the Concorde, while it was operating. Other winter destinations included Key West, Palm Springs, and Sydney.

“His great and jovial demeanor came through in spades on vacation,” Gene said. “Either cooking for the gang or planning restaurants to try. Leave it to Newsom to find tasty vittles.” And good shows. He was tight with the likes of late Broadway producer Leonard Soloway, and there was little he hadn’t seen, onstage or off.

The rest of the year, he was a workaholic by anyone’s measure, and a loyal friend, not only creating essential employment opportunities, but maintaining precious homes-away-from-home for countless L.G.B.T.Q.+ people on the East End.

At times those homes were literal: In the darkest years of the AIDS epidemic, Brent welcomed dying men into his Wainscott and East Hampton residences, providing them with the care they were denied by the families and local systems that had abandoned them. Thus was he known as Daddy, “in the most affectionate and paternal way,” Jonathan Milioti, another of Brent’s dear friends, wrote, “synonymous with a gentle human being who cared for and embraced lost souls into an accepting and inclusive world, without expectation or favor.”

Jonathan, Gene, and I — what I think of as Brent’s “last three sons” — visited him between Dec. 22 and Dec. 27. I was there alone each time, just missing my siblings, and Brent was in and out of lucidity, repeating the word “existence” in not much more than a whisper. His pulled-pork chipotle, fetched from Riverhead, untouched on his bed tray. “What would you eat, Brent?” I was making butternut-squash applesauce as holiday gifts for neighbors. He reviewed the recipe with me, nodding, and finally judging, “That sounds fit for human consumption.”

The next day after work, I peeled 10 pounds of apples and mashed butternut squash and baked it all for an hour before spooning the aromatic results into Mason jars.

But by Christmas Eve afternoon, when I arrived with the jar with his name on it, he was on oxygen. The nurse at the desk monitoring admittance to the Covid ward looked down pityingly at my gift with eyes that said, “Honey, he’s never eating anything again.”

I plunked it on the counter, much as Brent would have plunked down vats of hummus on Barefoot Contessa counters at 6 a.m. on Saturday mornings, long before anyone could buy it in a supermarket. “Hum this!” I heard him say, as I donned a gown, gloves, and a second mask. “Do you have a refrigerator?” They did. “In case he rallies.”

“You never know,” the nurse allowed.

“If not, someone should enjoy it. It’s really good. And pretty good for you. I use cider instead of sugar. And it’s vegan. Except for the butter. But not much. There’s like a half a stick in the whole recipe.” If I had stuck to the recipe, but I’d put in as much butter as politely, palliatively possible. There was no worrying about cholesterol at this point. Or pronounced alliteration. “He used to be a chef. I wanted him to have something decent and easy on hand.”

What else have I not gotten to?

Brent was cremated, and there will be an outdoor memorial in the spring. At Wainscott Green, on the footprint of the Swamp and Annex, pending town approval. We will post the day and time when we know it on all manner of social media.

He is survived by a grand-nephew, Cameron James Young, 38, of Roseville, Calif., a niece, Shari Young, 61, and nephew-in-law, Jim Young, 73, of River Hills, Wisc. Cameron attached a photo of Brent as a toddler, as well as a college portrait, to my Facebook post. Anyone could see the child in the man. Cameron believes Brent is on his mother, Verna’s, knee in the toddler pic, though it could be an aunt’s. He looks comfortable and happy.

“I think because he was gay in the ’50s, he may have kept family and personal life separate,” Cameron ventured.

“He told me a few. And I know where to find some others.”

What an impossible job faces a biographer, an obituary writer: Sum up, in under 2,000 words, the legacy of a human being. I’m not up to it, nor am I the best narrator for this particular story. I was a secondary character in Brent’s life; I just happened to be the last writer present when he died. I sat in the chair beside his bed, watching his chest rise, then fall, on Dec. 22, on Christmas Eve, on Dec. 26, knowing it would soon stop.

Which inevitably came to pass in the 11th hour of the 27th, long after visiting hours ended. The last person to see him alive was Gene Molina. I might have been there again the next day, in case hearing is indeed the last sense to go, telling him anything I could think of. I’m glad there was no 28th. He’d wanted to die for some time, to be free of the misery, pain, isolation, and, not least, bad food.

His last voice mail on Nov. 25 gives me permission to say this: “Hi, Tom. It’s Newsom. You just hung up and I couldn’t get my phone open in time. Happy Thanksgiving. I survived it. I’m not a great fan of turkey.” Coughing. “Hoping I wouldn’t be here the last half of November, so I wouldn’t have to deal with turkey. But I managed to get some down today. I’ll try you later. Or tomorrow morning. And I’ll check my voice mail. Great hearing from you. Take care, babe.”

Last writer standing, and surely this memoriam is the least I can do. But just as surely, it’s not enough. And I hope that all of you reading this far, who know so much more than I do, will continue to tell your stories in your own ways.

Here’s a last anecdote, also about food. At the zenith of his catering star, known throughout one of the world’s richest ZIP codes for gourmet dishes gracing the tables of ocean estates, he was spotted red-French-fry-handed in the takeout line for Mickie D’s by my colleague Robin Gianis, a Bridgehampton art teacher, who knew Brent intimately through the Barefoot Contessa connection.

He recognized her at once and blushed, pointing with charming, faux shame, “a Santa Claus twinkle in his eye. You know — he was a twinkler.”

Robin laughed, knowing exactly what he meant, and then some.

Well, Brent, word is out. We hope you enjoyed every bite of it.

Tom House is a writer, teacher, bartender, resident of Springs, and, just recently, the founding director and president of the public charity Hamptons Pride, Inc.