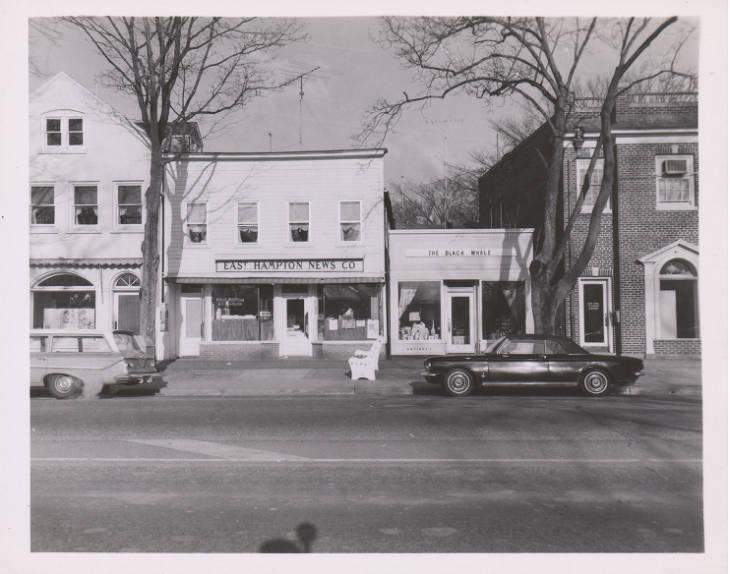 Fresh out of Cornell Vet School, I arrived at the East Hampton Animal Hospital in June of 1976 with my young family. Dr. Al Pontick, the senior veterinarian at the practice, was ready for retirement and I was his potential replacement.

Dr. Pontick had been living and working at 22 Montauk Highway for 35 years, since taking over the practice from the widow of the founder, Dr. William Bennett. Dr. Herb French came in 1954 and then Dr. Dale Tarr in 1968. For the few years prior to my arrival, Dr. Pontick had been working only summers. So, as we say, he had one foot out the door.

During that first summer in East Hampton, I stopped each morning at the East Hampton News Company on my way to the animal hospital. Every day, around 7 a.m., I would leave my house on Spring Close Highway and head down 27 into the Village of East Hampton. Just after the traffic light at Newtown Lane, I would pull over and park the vet-mobile in front of Dick O’Callaghan’s store on Main Street. For those of you who were not here in 1976, the East Hampton News Company was an old-fashioned newspaper-stationery store on Main Street across from the movie theater.

I was a bit enchanted by this place. Each day, I would park out front (can you believe it?) and pause on the sidewalk before entering, satisfying the senses, savoring the moment. Emanating from the open door, a synergistic aroma of cigars and newspaper drifted out onto the sidewalk. Inside, I could hear the regular group of men engaged in their morning gossip. After this short hesitation, I would pass into the store and attempt to offer a generic greeting to those present.

After a few weeks, Dick’s wife, Aggie, began to greet me by name. After picking up my paper (which I never had time to read), I would linger and listen to whatever discussion was taking place. I wanted to participate in this group, to converse, to be one of the guys. I wanted to feel as if I belonged here. I needed some kind of signal that I was welcome in the community. When I made the basketball team in grade school, they posted my name on a list on the wall outside the gym. I was on the team. My fraternity announced my approval with a pledge pin and a secret ritual. I was a fraternity brother. How would I know when I was accepted here in East Hampton?

During the week, the atmosphere inside the News Company was something between a bar and a barbershop: hard-working locals and semi-retired types engaged in conversation, camaraderie, and good-natured debate, a Daily News kind of crowd. On the weekend, the scene was more gentrified. Tanned gentlemen in tennis vests and Lacoste shirts schmoozed about national politics or local real estate while picking up their New York Times. I tried to befriend them all. After all, I was their new veterinarian. I was going to live here.

The walls of this charming store were lined with handsome wooden shelves. All of the cabinetry was antique quality with thick glass tops. Just inside the door on your left were stacks of the day’s newspapers. On Sunday mornings, with the large Sunday Times, you could hardly get in the door. Candy, cigarettes, and chewing gum were on display behind the counter. The atmosphere inside that store was unique. Martha Stewart would have called it antediluvian East End.

Most important to me, as you entered the store, on the wall on your right was a worn wooden cabinet without a front. The cabinet was a series of slots or cubbyholes that were just the perfect size for a rolled-up newspaper. Above each compartment, written haphazardly on pieces of paper Scotch-taped to the edge, were the names of the lucky 25 or so people who had the rights to one of these slots. Each morning, into each slot would go the patrons’ reserved daily papers, maybe a Times, perhaps a Newsday or Daily News, and certainly on Thursday The East Hampton Star.

To me, this was like valet parking for your newspaper. I would often stand and stare as an individual would wander in self-confidently, saunter over to his cubbyhole, and extract his personalized morning newspaper. Somehow, those cubbyholes began to represent something more to me than timely tabloid distribution. I thought that if I could just get my name on one of those slots, then I would somehow be considered as a member of this community.

These slot holders at the News Company were a disparate group of East Hampton residents, a mixture of longtime locals and blue-blooded immigrants. Many were clients at the animal hospital: Rudy DeSantis of Dreesen’s, Charles Osborne of the insurance company close by. But wait, what was that I saw? Right there, adjacent to the newspaper slot of Juan Tripp, the founder of Pan American Airways, was the name of my mentor, Al Pontick. Dr. Al was a member of the cubbyhole club!

Time flew. My first South Fork summer faded into autumn. Al Pontick was then in Florida for the winter. Each day I stopped for my paper, and on occasion I was included in a discussion or two with the regular members of the East Hampton News Company Daily Discussion Guild. My confidence was building.

Sometime late that winter, I came to an agreement with Al and became one-third partner of the East Hampton Animal Hospital. Dan Voorhees, an attorney, brokered the deal. Al and I shook hands over the phone: I agreed to a monthly payment and now the partnership and the coveted newspaper slot at the East Hampton News Company were mine.

The very next day, Dick O’Callaghan ceremoniously scribbled my name on a scrap of paper and taped it above my slot. I felt different. I was here. I belonged.

Dr. Tom Rothwell of Clinton, N.Y., practices at the Paris Hill Cat Hospital. He has family in Springs.